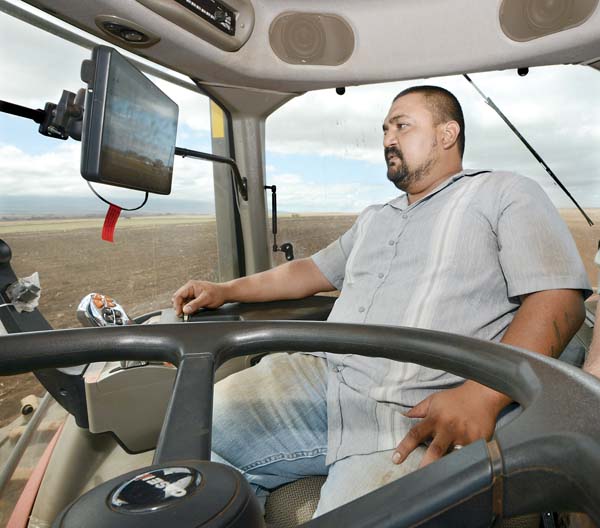 Mahi Pono Land Prep and Cultural Resource Manager Justin Teixeira sits back and lets a Case IH 340 Magnum tractor do the driving Wednesday while plowing a Puunene field set to be planted with potatoes. The automatic system uses GPS to allow for precise tilling and planting, which makes the processes more efficient and cost effective. The Maui News / MATTHEW THAYER photo

PUUNENE — Wind whipped through the central plains Wednesday morning and a team of Mahi Pono officials looked out at an expanse of empty land being worked by tractors.

As blades tilled the soil, this field signaled a turning point in agricultural history — from 150 years of sugar cane monocropping to an array of non-GMO crops to be used to bolster the county’s food supply.

The new season starts Friday when Mahi Pono, a joint venture between Pomona Farming and PSP Investments, holds a blessing and a first planting of red potatoes on about 40 acres in Puunene.

The planting will mark the first nonsugar crops going into the ground after the company purchased 41,000 acres of fallow fields from Alexander & Baldwin in December. After more than a century of production, A&B’s sugar endeavor, Hawaiian Commercial & Sugar Co., ceased Maui operations in 2016.

“It is exciting,” said Ceil Howe III, Mahi Pono principal, who was at the field. 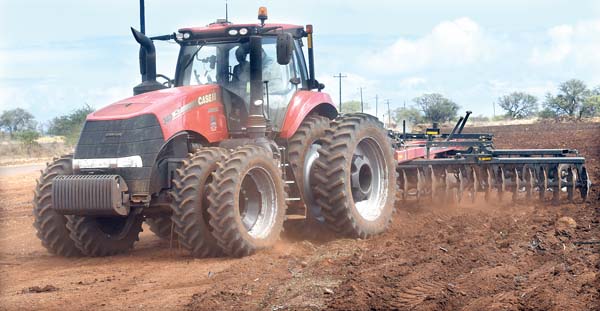 “This is history in the making,” added Tiare Lawrence, community relations director.

Howe broke down the anticipated timeline for crop harvests, including red potatoes, citrus trees, avocado and macadamia nuts. Some crops, such as potatoes, take months; others, like the orange and lime trees, will require years.

“Mac nuts will have a small harvest the fourth year, but they’re not fully mature until they’re 8 or 9 years old,” he said.

The time is worth the investment in Maui’s future, according to Shan Tsutsui, senior vice president of operations. Increasing local food production, with export potential, has always been the goal.

“Part of the thought process behind what we’re going to grow and how much we’re going to grow is driven by what’s being imported and how can we replace that,” Tsutsui said. “The amount of oranges that the (state) Department of Education consumes, if we can replace even a fraction of that, that goes a long way for food security.” 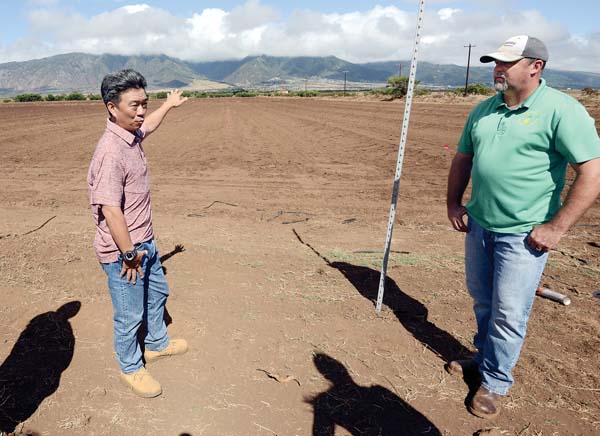 Mahi Pono Senior Vice President of Operations Shan Tsutsui (left) talks with General Manager of Farm Operations Darren Strand at a Puunene field being prepared for the planting of citrus trees on Wednesday.

Potatoes, the first of the crops to be planted, will likely be ready for a November harvest, Tsutsui said. Sales and marketing teams, along with a potato manager, are being put in place, and the company is having conversations with possible buyers, such as local restaurants and hotels, to ascertain desired quantities.

Earlier this year, Mahi Pono estimated that between 27.25 and 34.47 million gallons of water per day would be needed for the eventual cultivation of 31,177 acres of land if a water lease renewal by A&B was not secured from the state. A recent appeals court decision, however, opened the door to the possibility of obtaining those revocable water permits, which appeared in jeopardy following a lower court decision. 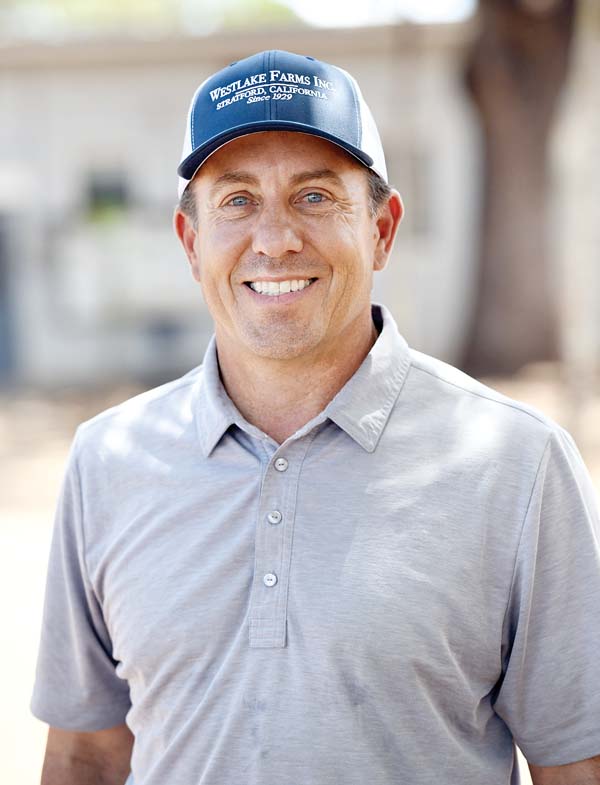 Mahi Pono Principal Ceil Howe III was at the Puunene fields Wednesday explaining the crop plan and timetables for harvesting.

Tsutsui and Darren Strand, general manager of farm operations, discussed other hurdles of planting in a tropical environment and how work to cultivate land formerly used for sugar cane requires experimentation.

“We’re learning that we can’t just import Mainland practices here and get the same results that we’re getting out of the Mainland,” Strand said. “We did a lot of land prep practices here with the new equipment we had, exactly what you’d do in California. We were like, ‘I don’t know that that’s going to work.’ ”

One of the biggest challenges facing Mahi Pono, and any agricultural venture, is Mother Nature.

“As you can tell by the wind, there are a lot of different conditions we deal with here versus what happens on the Mainland,” Tsutsui said. “The wind breaks and those types of things we do are really important.”

From seed to greenhouse to shade house and finally soil, the planting process takes time, he added. 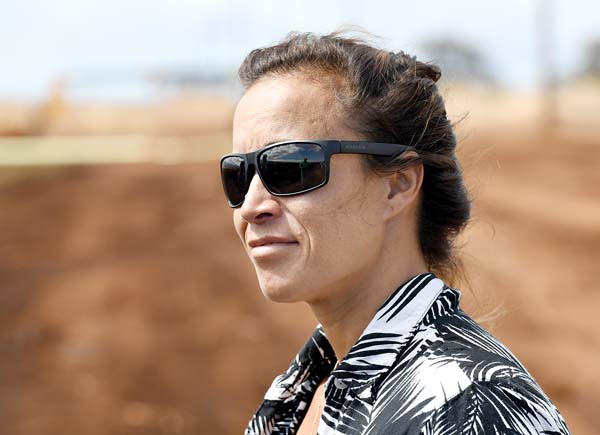 “It’s kind of a long process,” Tsutsui said. “I know everybody’s like, ‘Where’s your plants?’ It’s not as easy as going to Home Depot and just sticking something in the ground. We want to make sure by the time our plants get here that they can actually survive in these conditions. It’s not easy.”

Longtime farmer Justin Teixeira, land prep and cultural resource manager, said ag requires lots of work and isn’t always predictable. For example, with the company’s investment in planting citrus, any missteps may not be evident until years down the road, he said.

However, grafting strong rootstock and soil cultivation, such as planting forage and cover crops, will pay off in the long run, Mahi Pono farmers said.

“When you take care of the land, it takes care of you,” Teixeira said.

Strand likened the process of growing strong roots to attempting to plant an avocado tree with a seed from a commercially grown avocado.

“Have you ever taken an avocado pit, grown it in a cup, then taken it and planted it in your yard? Did it die? That may be the kind of avocado you want to eat, but the roots that the commercial avocado trees grow on are special rootstock . . . that’s resistant to nematodes and fungus. They take that avocado variety, and they graft it on the rootstock. So it gives you what you want, but it has a strong root system. Fruit trees are the same way.”

The company is leasing 2-, 5- and 10-acre parcels at Mahi Pono’s agriculture park, starting with 2- and 5-acre lots on 40 acres of land located in a 250-acre field in Puunene along Maui Veterans Highway. For Hawaii residents and small local businesses only, the cost of a lease is $150 per acre per year. Access to irrigation, windbreaks and ungulate fencing is included.

About 200 applications were received for Mahi Pono’s community farms since its June announcement, Lawrence said. The company’s Community Advisory Board is reviewing applications and will likely make selections by September so farmers can move into land by the end of the year, she added.

Also, Mahi Pono is working with University of Hawaii Maui College to develop career pathways in agriculture. One plot of land on the central plains tour Wednesday will be used for tours and instruction, company officials said.

“The whole point of this field is to learn the processes and the biology of the fields,” Strand said of the parcel.

“When we do educational events, we can bring groups here and show them what we’re doing,” Tsutsui added.

The company, which has 48 employees and will continue to hire as farming operations ramp up next year, emphasized that it is committed to keeping all 41,000 acres in agriculture and has no desire to convert to nonagricultural uses.

After all, greater food security is the goal, Tsutsui said.

“We will get there, one step at a time,” Tsutsui said. “This is just the beginning.”