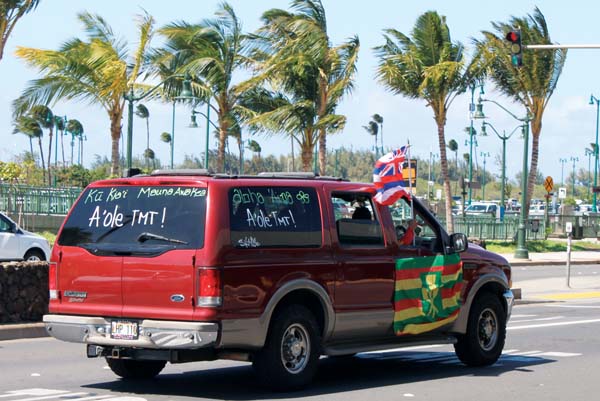 About 200 peaceful protesters drove cars from Lahaina through Wailuku to the Kahului Airport on Monday, many with “Aole TMT” written on the windows, demonstrating against the Thirty Meter Telescope being built on Mauna Kea. The convoy included about 100 vehicles. The Maui News / DAKOTA GROSSMAN photo

Police issued eight traffic citations while monitoring a convoy that peaked at about 100 vehicles Monday while traveling from Lahaina to Kahului Airport to protest the Thirty Meter Telescope at Mauna Kea.

Vehicles left Lahaina at about 1:30 p.m. and arrived at the airport at about 2:30 p.m. The vehicles, some with Hawaiian flags attached, circled the airport for about two hours with horns honking.

Organizer Ke’eaumoku Kapu said about 200 people participated in the protest.

Police officers monitored the convoy’s movement, which included stops at Maalaea Small Boat Harbor, the North Kihei Road junction and Waikapu as more vehicles joined. From there, the convoy continued past the county and state buildings in Wailuku and down Kaahumanu Avenue.

Police reported “no appreciable effect on the flow of traffic.”

The day before the protest, the Maui Police Department posted a traffic alert on social media so people planning to travel from Lahaina could adjust their schedules.