It would allow EMI to divert water from East Maui streams 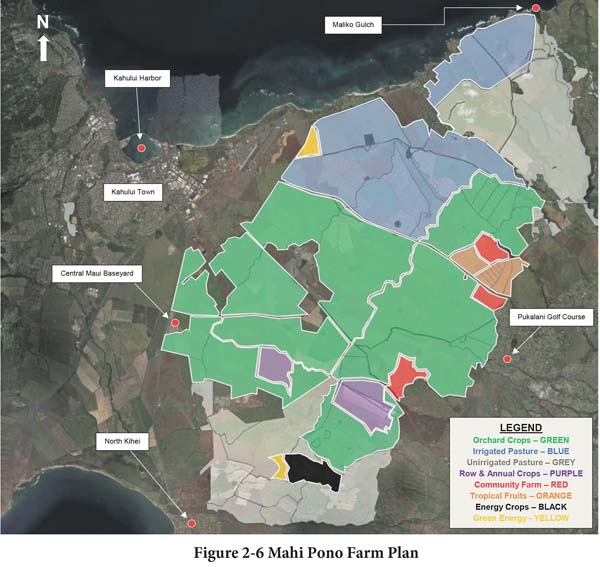 Alexander & Baldwin is seeking a long-term water lease to divert water from East Maui streams on state land, after years of relying on temporary permits that came under fire from community and environmental groups and the courts.

A&B and its subsidiary, East Maui Irrigation Co., are requesting a 30-year lease from the Board of Land and Natural Resources that would allow for “developing, diverting, transporting and using government owned waters” through EMI’s existing ditch system in the Nahiku, Keanae, Honomanu and Huelo areas, according to a draft environmental impact statement released Monday.

The lease would allow EMI to enter state-owned lands to maintain and repair existing access roads and trails that are part of its system. It also would allow the company to deliver water to domestic and agricultural users Upcountry, including the Kula Agricultural Park and its 262-acre planned expansion; the Nahiku community, which through the county draws up to 20,000 to 45,000 gallons per day from the ditch system; and Mahi Pono’s 30,000 acres of former sugar cane lands in Central Maui.

Mahi Pono is co-owner and operator of EMI along with A&B.

“The filing of the DEIS is an important step in ensuring both the supply of water for Upcountry Maui residents and supporting Mahi Pono’s vision of transitioning former sugar cane land into diversified agriculture, increasing local food production and helping achieve food security for Maui, and our state,” said Shan Tsutsui, senior vice president of operations for Mahi Pono. “We are pleased that EMI is moving forward with this process.” 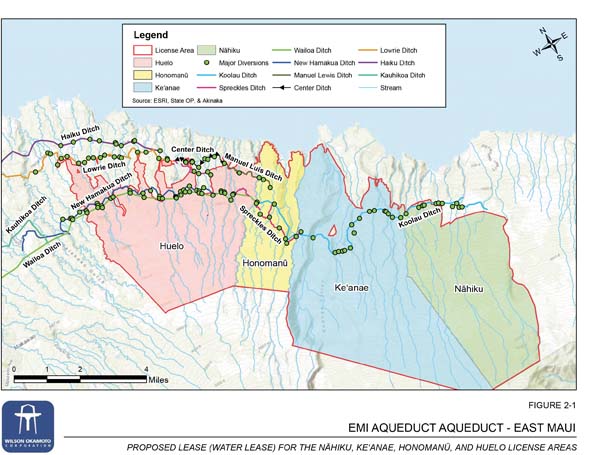 Alexander & Baldwin and its subsidiary, East Maui Irrigation Co., are seeking a long-term lease from the state Board of Land and Natural Resources to divert water through EMI’s ditch system in the Nahiku, Keanae, Honomanu and Huelo areas. A draft environmental impact statement for the request was released Monday.

In 2000, BLNR granted revocable permits to A&B and EMI, allowing them to take water from streams in Nahiku, Keanae, Honomanu and Huelo. In 2001, A&B and EMI applied for a long-term water lease, but the request was challenged by Na Moku Aupuni O Ko’olau Hui, a group of East Maui farmers, fishermen, hunters and traditional practitioners looking to restore the diverted streams.

While the contested case was ongoing, the BLNR continued to renew the permits on a “holdover” basis for more than a decade. In 2016, a 1st Circuit Court judge ruled that this practice violated state law.

However, in June, the state Intermediate Court of Appeals vacated the decision, saying that the 1st Circuit judgment contained factual problems and returning the case to the lower court for clarification. This opened the door for the state to continue issuing revocable permits as it did before.

Now, A&B is seeking a 30-year lease, which it says is needed to help Mahi Pono get financing for its farming operations.

“In order for Mahi Pono and other farmers to justify the very substantial investment in a 30,000-acre farm, a long-term water lease will be required,” the draft EIS said. “A short-term lease would derail development of the Mahi Pono farm plan because of the risk of not being able to farm for a long enough period to recover their planned investment.” 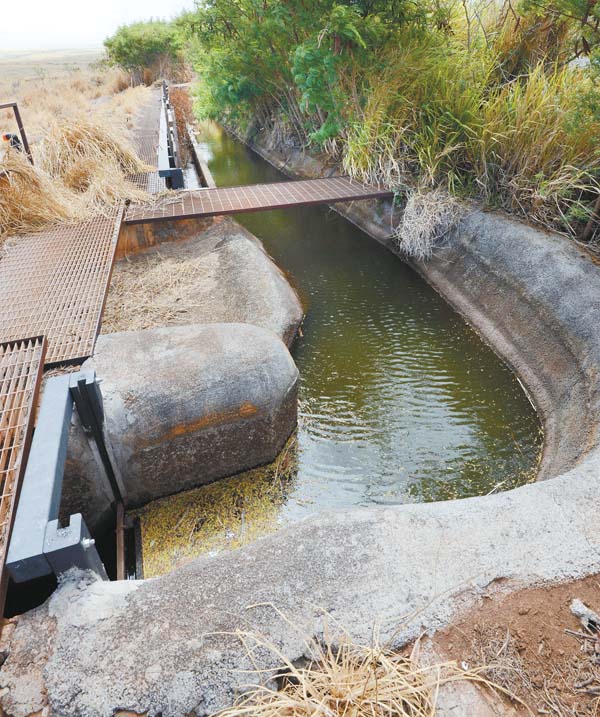 An agricultural irrigation ditch flows near Pulehu Road. This photo was taken in July. The Maui News / MATTHEW THAYER photo

Mahi Pono’s farm plan, which is included in the draft EIS, outlines the proposed crops and uses based on the water available under the state water commission’s ruling in June 2018 that restored flows to certain East Maui streams.

Under the commission’s ruling, the total water available for Central Maui agricultural use after system losses is about 82.33 million gallons per day — 65.88 mgd of surface water and 16.47 mgd of brackish groundwater. Thus, Mahi Pono’s proposed uses and water needs are as follows:

Once the BLNR issues the water lease, Mahi Pono could put its proposed farm plan into action, the draft EIS said. It would take about 10 years for Mahi Pono and lessees to remove volunteer sugar cane and weeds from the 30,000 acres, amend the soil, install field improvements, build warehouses and other structures and plant crops. The main crops would be orchard trees, which would take about five to 12 years to reach full maturity and could then provide yields for 35 to over 100 years.

Currently, with most of the fields not in active cultivation, about 20 to 25 mgd is being diverted by EMI’s system, according to the draft EIS.

The county’s Upcountry system, meanwhile, would continue to receive the same amount of water from EMI under the proposed water lease. Most of the Upcountry system relies on three surface water sources, one of which is delivered by EMI through the Wailoa Ditch. Average daily use by the county from the Wailoa Ditch is about 7.1 mgd, and that’s expected to stay the same under the proposed lease, according to the draft EIS.

The other two surface water sources for Upcountry are not part of the proposed lease. They’re fed by streams located on Mahi Pono-owned lands. Through an agreement with EMI, these sources are diverted and transported by two county aqueducts also located on Mahi Pono lands.

The draft EIS projects that total operational costs to maintain and operate the EMI system — including payments to the state for the water lease — would come out to about $2.5 million per year in private funds.

An attorney for Na Moku Aupuni O Ko’olau Hui declined comment on the draft EIS on Monday, saying she wanted to review the document first.

David Frankel, an attorney for the Sierra Club of Hawaii, thought a shorter lease would be better and said that the length of time A&B was requesting “is a huge problem.”

“There’s a lot of studies that still need to be performed, and it makes no sense to allocate water over 30 years given climate change, the lack of critical scientific information, the lack of analysis regarding the impact diversion structures have, and the degree to which the existing water commission decision sufficiently benefits streams or not,” Frankel said.

Frankel also expressed concerns about the streams that were not included in the commission’s 2018 ruling and how they could be impacted by EMI diversions. He said a lot of attention has been placed on the amount of water in the streams, but less focus has been on the impacts of the diversion structures themselves, which can stop native aquatic species from migrating upstream, cause larvae to fall through grates and into ditches rather than continue downstream and create stagnant pools where mosquitoes breed.

“In a lot of ways, the DLNR and A&B are doing everything backwards,” Frankel said. “What they’re attempting to do is make a decision first and get information later. There is some information in this draft EIS, which was not previously available, but there’s so much basic information that nobody knows.”

Comments on the draft EIS are due Nov. 7. They can be sent to the approving agency, the Board of Land and Natural Resources, at 1151 Punchbowl St., Honolulu 96813 or by contacting Ian Hirokawa by phone at (808) 587-0400 or email at ian.c.hirokawa@hawaii.gov.

A photo of members of the Maui Korean War Veterans Association, some of whom have recently passed, hangs on the wall at a Korean War exhibit in remembrance of their sacrifice. The Maui News / DAKOTA GROSSMAN photos

The Korean War exhibit, “The Forgotten War Revisited,” is coordinated by Jo Davidson, who hopes that visitors to the Nisei Veterans Memorial Center presentation will learn the history of the war and to spread “aloha.”

Alexander & Baldwin and its subsidiary, East Maui Irrigation Co., are seeking a long-term lease from the state Board of Land and Natural Resources to divert water through EMI’s ditch system in the Nahiku, Keanae, Honomanu and Huelo areas. A draft environmental impact statement for the request was released Monday.

Miles Kiffmann back-kicks into a taekwondo paddle during a drill session.

ABC Stores recently bought this 40,000-square-foot lot in the Maui Lani Village Center. The business plans to construct a 20,000-square-foot distribution center. The lot is next to Group Builders on La‘a Street. The Maui News / MELISSA TANJI photo

An agricultural irrigation ditch flows near Pulehu Road. This photo was taken in July. The Maui News / MATTHEW THAYER photo