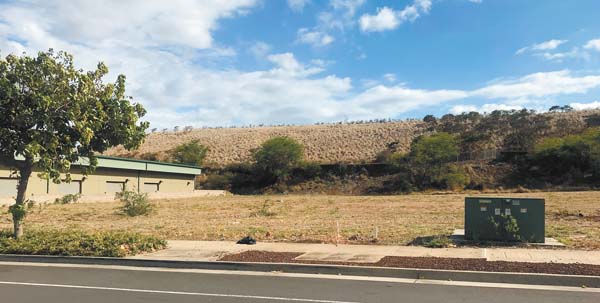 ABC Stores recently bought this 40,000-square-foot lot in the Maui Lani Village Center. The business plans to construct a 20,000-square-foot distribution center. The lot is next to Group Builders on La‘a Street. The Maui News / MELISSA TANJI photo

ABC Stores President and Chief Executive Officer Paul Kosasa said need has driven the company to build a distribution center for its stores on Maui that has been in the plans for a while.

ABC Stores recently closed on the purchase of a 40,359-square-foot lot at the Maui Lani Village Center in Kahului for around $2 million, Kosasa confirmed Friday.

The purchase does not exactly signal an expansion of stores on Maui. Kosasa said the company has been trying to find a distribution location for years.

“We just never got to it,” he said. “I guess it comes to a point where because of our changing formats where we have full-service delicatessens now, as well as our existing kind of merchandise, we needed storage on island.

“We shipped a lot of stuff from Oahu. A couple of stores would store extra for the other stores.”

With the tourist-focused ABC Stores in high-rent resort areas, Kosasa said the company does not focus too much on storage space at its stores, putting more space into sales, leaving the need for storage locations elsewhere.

The Valley Isle has 12 ABC retail stores and also owns the Lineage restaurant in Wailea, home to “Top Chef” Sheldon Simeon. Maui has the largest number of ABC Stores outside of Oahu, Kosasa said. ABC Stores has roots in Maui since the 1980s and has locations in Kihei, Wailea and Lahaina.

ABC also has locations in Las Vegas, Guam and Saipan.

The Maui stores employ around 200 residents, according to a news release.

Kosasa said new employees will be sought for the distribution center.

“We’re very excited to welcome ABC Stores to the Maui Lani Village Center,” said Grant Howe, a managing member of Commercial Properties of Maui. “They’re a well established kamaaina company . . . and a successful business history. We’re happy to have them.”

Regarding its newest project on Maui, Lineage, Kosasa said the restaurant is “doing OK.”

The restaurant was recently nominated along with 49 other restaurants by Bon Appetit magazine for America’s Best New Restaurants. Lineage has Filipino influences from Simeon, such as chicharon and pork and peas, along with a spin on local favorites, such as smoke meat and kimchi dip.

ABC Store’s other restaurant venture is Basalt in Waikiki.