Are future TMT discoveries worth the battle?

Astronomers, space industry say there’s no way of telling what findings may be 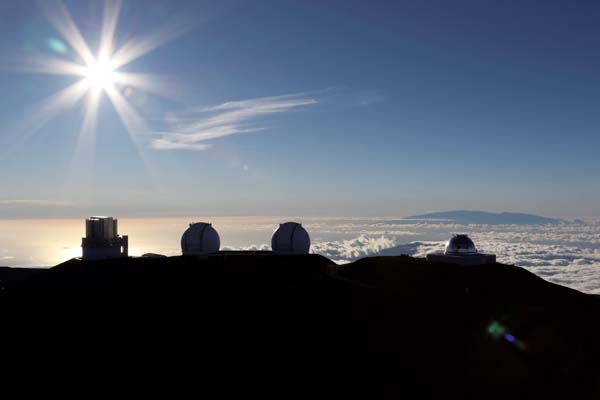 The sun sets behind telescopes at the summit of Mauna Kea in this photo taken in July. AP photo

WAILEA — As protesters continued to block the road to the summit of Mauna Kea last month, officials with the Thirty-Meter Telescope took a precautionary step — applying for a permit to build the telescope in Spain’s Canary Islands.

While TMT opponents welcomed the move, a group of environmentalists in Spain quickly spoke out, vowing to stop the facility from being built on a mountaintop that they said already was crowded with telescopes.

As telescopes grow larger and astronomers peer deeper into space, the question continues to loom — are the discoveries of the future worth the battles here and now? Experts in the astronomy community say that’s tough to answer, but point out that the discoveries of the past have proven the value in studying the skies.

“It’s really hard to determine what will come out of blue sky, fundamental research, especially in astronomy,” said Steve Gower, director of research at the Space Environment Research Centre in Australia.

“Researching astronomy and black holes,” he said, for example, “gave us Wi-Fi.” 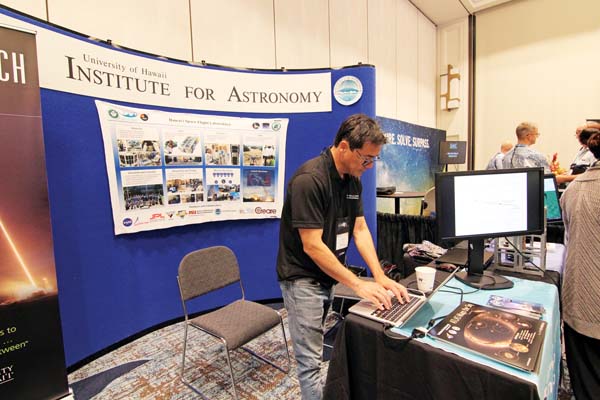 Gower was among the hundreds of attendees at the 20th annual Advanced Maui Optical and Space Surveillance Technologies Conference in Wailea this week, though AMOS organizers with the Maui Economic Development Board emphasized that TMT was not part of the conference and that MEDB does not have a stance on the telescope.

The Maui News asked AMOS conference attendees about how the scientific community can strike a balance between the pursuit of discovery and the concerns of local communities.

“It’s an amazing site from both perspectives — scientifically, but I can also see why it’s sacred ground as well,” said Todd Mosher of Tyvak Nano-Satellite Systems, who has a friend that works at Mauna Kea. “I’ve gotten to go on a tour, and I got to see the Keck Observatory. Both are amazing, both the nature and the science that are happening, so trying to figure out a way to blend the two of those seems like a worthy goal.”

For David Williamson of Terran Orbital, which owns Tyvak, no comparison could be made between the potential discoveries and the cultural concerns.

“If you could do some unknown scientific discoveries, you can’t take those and go, ‘We have X number of discoveries. That’s going to outweigh Hawaiian tradition,’ “ Williamson said. “You can’t match them up.” 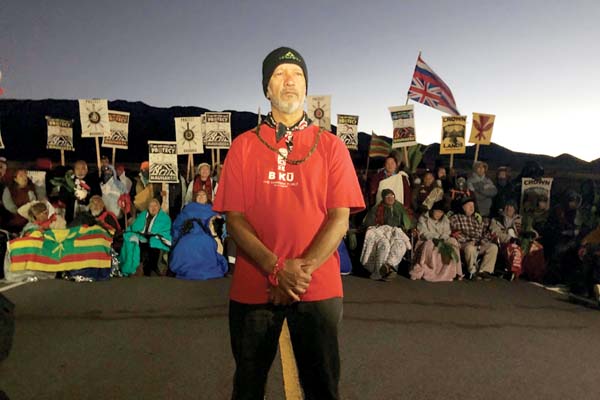 Dexter Kaiama joins demonstrators gathered to block a road at the base of Mauna Kea in this photo taken July 15. The demonstrators are attempting to block construction of the $1.4 billion Thirty Meter Telescope at the summit of Hawaii’s tallest mountain. AP photo

Larry Denneau, co-principal investigator with the University of Hawaii Institute of Astronomy, said he could not comment specifically on TMT, but provided some perspective on how different telescopes collaborate on research that can impact day-to-day life.

Denneau studies asteroids on “death-plunge trajectories” toward Earth, using the Asteroid Terrestrial-impact Last Alert System (ATLAS) telescope that is located on both Haleakala and Mauna Loa. Small enough to fit in a garage, the ATLAS telescope can spot asteroids several days to weeks away. In June, ATLAS-2 on Mauna Loa helped detect a relatively small asteroid near Puerto Rico.

But while it has a wide field of vision that can take in the whole night sky, ATLAS also relies on the complementary abilities of other telescopes, like Pan-STARRS on Haleakala, that can see farther.

“When we see an asteroid, from our initial observations, you can’t know for sure if it’s going to hit,” Denneau said. “All you know is it has an orbit that says it might hit. So you need other telescopes to follow that asteroid, which are better than us at doing that. And then usually within a couple of hours you’ll know precisely where it might hit.”

On Mauna Kea, considered one of the best vantage points for studying the stars, the telescopes aren’t focused on asteroids; rather they’re looking at things that happened billions of years ago. Because the skies above the mountain are so pristine, the telescopes there “are designed to look really, really far away. That’s their bread and butter,” Denneau said.

“It does give us answers for how the universe formed — our understanding of what’s out there and our place in it, where it’s all going, maybe,” Denneau said. “The universe, as best we can tell, is expanding. There’s this Big Bang that happened, and everything that we look at seems to be moving away from us. So that means everything is kind of expanding.

“And a big question is, will everything expand forever and never stop? Or will it kind of slow down and then kind of fall back together? That’s one of the big outstanding questions of cosmology, and the telescopes up there (at Mauna Kea) are really good at answering that kind of question.”

Gower said that researchers often stumble across discoveries that they hadn’t set out to find in the first place. For example, the technology behind today’s high-speed Wi-Fi has been credited to Australian researchers who were trying to figure out how to piece together radio waves while searching for black holes. Gower said that the benefits of astronomy research aren’t “immediate returns” and may only be realized in the long run.

But, once researchers understand a little more about the universe, “we can then start to use it to our advantage,” he said. “And the very first step down that road is actually detecting these things.”

For Gower, the controversy in Hawaii strikes a familiar chord back home. In Australia, indigenous groups have fought for years to stop people from climbing the sacred site of Uluru, also known as Ayers Rock. A ban on climbing the rock goes into effect in October.

Gower said he thinks there’s advantages to having access to sacred sites; it gives people a sense of what makes the places so important to indigenous communities.

“That doesn’t mean you have to desecrate the site in order for that to happen,” he said. “So how do you make the site accessible in such a way that it builds understanding between different cultures?”

Kia’i, or protectors, at Mauna Kea have long said that they are not opposed to science but rather against desecration of the mountain and the state’s mismanagement of lands. Supporters, meanwhile, have touted the jobs, economic benefits and potential for groundbreaking research.

Amber Imai-Hong, an avionics engineer with the Hawaii Space Flight Lab, said her family was opposed to the telescope at first. But as the TMT officials engaged with the community and answered her family’s questions, they shifted their support in favor of the telescope.

“It’s not necessarily about this telescope,” she said. “It’s about the impact of the astronomy community, good and bad. And the state needs to address a lot of the concerns that have been brought up, because it’s not up to TMT to remove telescopes. It’s not up to TMT to solely restore the mountain to what it was or try to fix the problems that are there.”

A Native Hawaiian, who was born and raised on Hawaii island, Imai-Hong said that she knows that the astronomy community hasn’t always been the best stewards of the mountain in the past. She said she hoped they could learn from the current situation and that the state would step up and work out a compromise.

Imai-Hong used to go up to Mauna Kea every year for her birthday to see the Perseid meteor shower and agreed that being on the mountain is a spiritual experience. While there’s no telling what discoveries could come out of TMT, Imai-Hong said that she believes they would enhance and “pay homage to our culture,” and that having the telescope there would strengthen Hawaii’s science community.

“To me and to my kupuna, . . . we follow the saying that ‘we back into our future by looking to our past,’ “ Imai-Hong said. “So to me, TMT is very much our way to be at the forefront of technology as we have been and as our ancestors have been.”