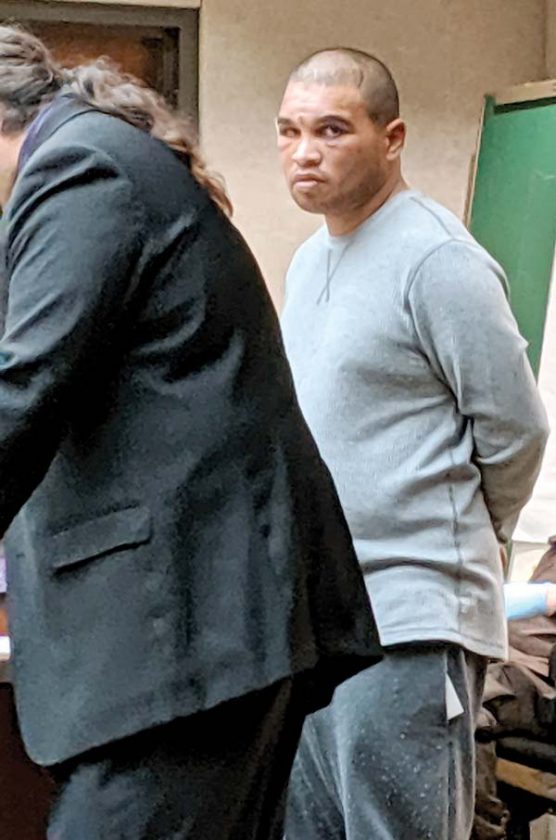 Manuel Nunes Jr. appears in Wailuku District Court on Monday afternoon. He is facing attempted murder and other charges in the shooting of another homeless man early Thursday on Hoohana Street near the parking lot of the closed Safeway store in Kahului. The Maui News / LILA FUJIMOTO photos

WAILUKU — Bail was reduced to $250,000 for a homeless man who appeared in court Monday after being arrested for attempted murder in the shooting of another homeless man last week in Kahului.

Manuel Nunes Jr., 36, was arrested after the shooting reported at 4:24 a.m. Thursday on Hoohana Street near the parking lot of the old Safeway store, where homeless people were staying.

Police said Nunes used a 12-gauge shotgun loaded with birdshot to shoot a 28-year-old man in the upper back and back of his head after the two men argued.

Both men were taken to Maui Memorial Medical Center after the shooting.

Nunes was treated for injuries he suffered while being subdued by other homeless people in the area, police said. 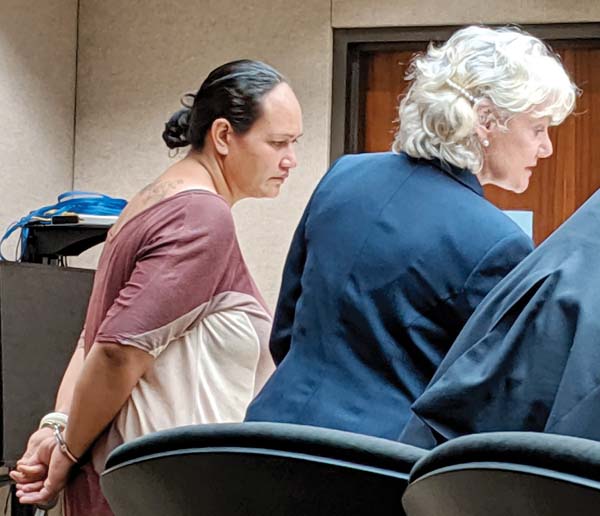 Blossom Edayan Nunes stands with Deputy Public Defender Rachel Miyoshi in Wailuku District Court on Monday afternoon. Edayan Nunes is charged with hindering prosecution in connection with the shooting of a homeless man early Thursday near the parking lot of the closed Safeway store in Kahului.

His wife, Blossom Edayan Nunes, 36, also was arrested after allegedly hiding the shotgun from police after the shooting.

Manuel Nunes is charged with attempted second-degree murder, two counts of use of a firearm in the commission of a separate felony, carrying or possessing a loaded firearm on a public highway, second-degree assault and prohibited possession of a firearm.

The victim in the assault charge is a woman who was injured in the shooting, officials said.

During Nunes’ initial appearance Monday in Wailuku District Court, Deputy Public Defender Gustavo Gonzalez asked that bail be reduced from $450,000 for Nunes. His family was “attempting to scrape together some money to post bail,” Gonzalez said.

“It is so high because the defendant does pose a danger to the community,” Smith said.

He said Nunes is on probation for a violent offense, abuse.

Nunes is a flight risk, Smith said, noting the defendant has no permanent address, no employment “and nothing stable in his life right now.”

Judge Blaine Kobayashi said he was taking into consideration the prosecution and defense positions, Nunes’ financial status and his prior criminal history in reducing bail to $250,000.

Edayan Nunes, who also made her initial appearance in Wailuku District Court on Monday afternoon, had her bail increased from $5,000 to $16,000 on charges of keeping a pistol in an improper place, keeping ammunition in an improper place and first-degree hindering prosecution.

Smith sought the bail increase, saying Edayan Nunes has no known permanent residence and no employment. He said she is accused of hiding the gun used in the shooting from police.

“Based on that conduct, she’s a flight risk and a danger,” Smith said.

“The court’s concerned about the dangerousness,” Hamman said.

Both Edayan Nunes and Nunes were ordered to return to court Wednesday.

The public defender’s office was allowed to withdraw from representing both defendants after attorneys said the office has represented the victim of the shooting.