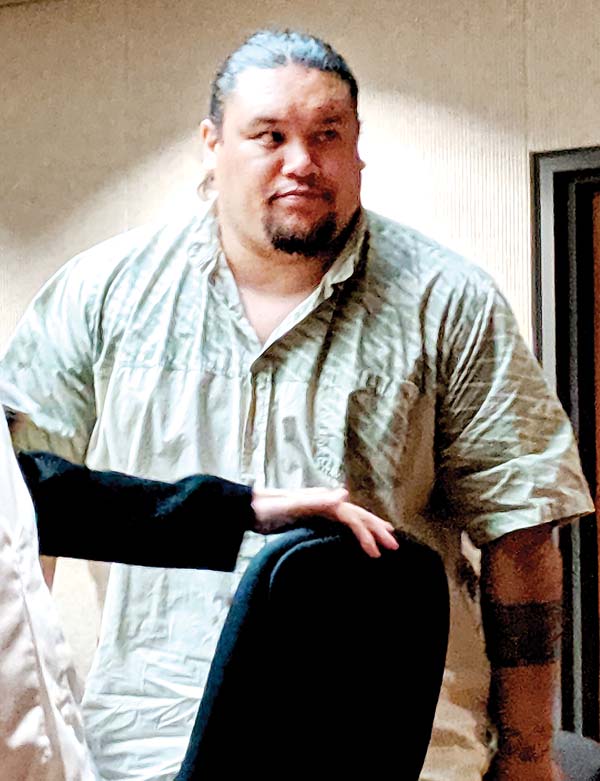 Levi “Pio” Aki Jr. appears on Thursday in 2nd Circuit Court. Aki was placed on four years’ probation and was given credit for about six months he previously spent in jail for felony threatening of a man who was renovating his house in Kahakuloa Village five years ago. The Maui News / LILA FUJIMOTO photo

WAILUKU — A man who described being beaten and terrorized in his house in Kahakuloa Village called a plea deal “insulting” when one of his attackers was placed on four years’ probation Thursday.

Levi “Pio” Aki Jr., 30, of Wailuku was given credit for more than six months he previously spent in jail, as part of his sentence.

“Every night I relive the attack in my nightmare,” Christopher Kunzelman said at the sentencing hearing.

He said he, his uncle and friends had been renovating a house he bought on Kahekili Highway, expecting it would be the “final house” for his wife, who had been diagnosed with a potentially disabling disease.

Kunzelman said he saw two men approach the property from the rocky beach.

His handicapped uncle was “cracked” over the head by the strangers, Kunzelman said, before the men rushed Kunzelman.

“For many minutes, they beat me and terrorized me,” he said.

He said Aki handed co-defendant Kaulana Alo Kaonohi a roofing shovel that was used to hit Kunzelman on the back of his head.

He said the attack was captured in a 23-minute video, along with Kunzelman’s pleas for the men to stop.

He said the defendants told him, “It’s nothing personal, you just have the wrong f—king color skin.”

Kunzelman said he was “seeing stars” when Alo Kaonohi threw him up the stairs and told him to get his belongings and get out.

“I was being violently evicted from my own house,” Kunzelman said.

He said he was legally carrying a gun, which he tossed away when his attackers saw it. Kunzelman said a gold chain necklace and cellphone were taken from him, and he was knocked unconscious. He said he awoke to find he was being kicked repeatedly, suffering two broken ribs.

He said his attackers couldn’t find his gun before Kunzelman and his uncle fled and the intruders smashed windows of the house with the shovel.

Later, he said police told him everything was stolen from the house.

Aki had pleaded no contest to first-degree terroristic threatening.

Saying the first-degree terroristic threatening charge “barely resembles the crime you see in the video,” Kunzelman asked the judge to throw out the plea agreement and have the case go to trial.

Second Circuit Judge Peter Cahill said he didn’t have the power to dismiss the proceedings as Kunzelman was asking.

A trial had been set to begin in January before the prosecution asked that Aki and Alo Kaonohi have separate trials.

Cahill said there had been a chance that the case was going to be dismissed with prejudice before the prosecution reached plea agreements with the defendants.

Defense attorney Wendy Hudson said Aki, who was 25 when the case started, had matured and now has children and works two jobs.

“I don’t think he would have gone to the house at all if it weren’t for his cousin,” she said. “For whatever reason, he followed him over. He thought Mr. Kunzelman was trespassing. They also didn’t think he had an easement. That was sort of the impetus to go over there. We’re still unclear whether there’s this valid easement or not.”

Speaking in court, Aki said “the man I was back then” probably would have told people what he did was right.

“I can look at you dead in the face and say I was wrong,” he said, addressing Kunzelman. “I apologize.”

“Would you let him go back to his house?” Judge Cahill asked.

“Of course, he’s a human being,” Aki replied.

Deputy Prosecutor Mike Kagami opposed Aki’s request for a chance to keep the conviction off his record.

Kagami said the claims recited by Kunzelman show Aki trespassed by going onto Kunzelman’s property and demanded Kunzelman leave, “assaulting him and terrorizing him for a good 20 minutes.”

“This is not a case where I could ever allow somebody to keep something like this off their record,” Cahill said. “I can’t find that the interests of justice are served.

“This was a deliberate, intentional act of violence.”

Cahill said he was glad Aki spoke directly to Kunzelman in court.

He said not only Kunzelman, but also his family members were victims in the case.

Aki was ordered to complete anger management classes as part of his probation. He also was ordered to have no contact with Kunzelman and his family, and not go to Kunzelman’s residence.

Kunzelman said he can’t go back to his Kahakuloa house.

“Both gates are locked, and they built a fence around my house,” he said.

Alo Kaonohi, 29, is set to be sentenced Oct. 17 after pleading no contest to first-degree assault in the case.

A Jan. 23 restitution hearing was set for Aki.