Committee unable to get to decision-making 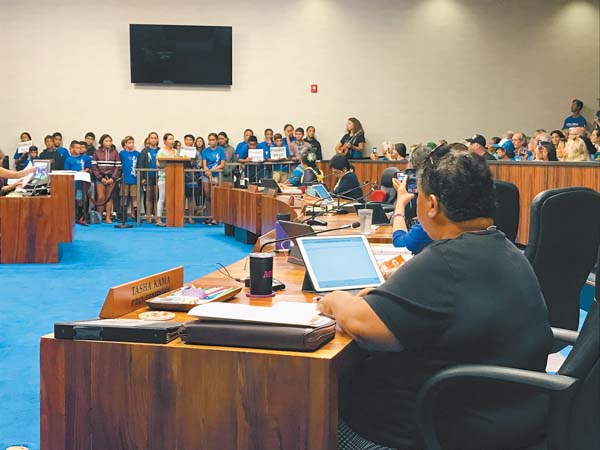 Maui County Council Member Tasha Kama (far right) and fellow council members look on as students from Lahaina Intermediate’s Hawaiian language immersion program prepare to sing during a meeting of the Governance, Ethics and Transparency Committee on Tuesday morning. Testifiers of all ages filled the Council Chambers to discuss the county pulling back a case from the U.S. Supreme Court involving injection wells at the Lahaina Wastewater Reclamation Facility. The Maui News/MELISSA TANJI photo

WAILUKU — Students, Maui state lawmakers and dozens of other community members showed up to testify on injection wells Tuesday before a Maui County Council committee in a session that went late into the night.

The majority of those testifying urged the county to withdraw its Lahaina injection wells case pending before the U.S. Supreme Court. A total of 99 people signed up to testify, though only 64 spoke, according to committee Chairman Mike Molina. Public testimony ended at around 8:30 p.m., and the meeting recessed shortly after.

It will resume at 1:30 p.m. Friday. Public testimony has been closed.

The council’s Governance, Ethics and Transparency Committee did not take action Tuesday night on measures to settle a lawsuit over the reach of the Clean Water Act. Mayor Michael Victorino continues to support the appeal that has reached the nation’s highest court and has national implications.

The plaintiffs are environmental groups Hawaii Wildlife Fund, Surfrider Foundation, West Maui Preservation Association and Sierra Club, which sued the county in 2012 over the county’s use of injection wells at the Lahaina Wastewater Reclamation Facility. Plaintiffs say the effluent is reaching the ocean and impacting coral reefs and sea life.

The county argues that the discharge of treated wastewater from injection wells does not require permits under the Clean Water Act because the pollutants do not flow directly into the ocean but rather indirectly through groundwater.

In November, the case will be heard by the high court after circuit courts around the country were split over the reach of the Clean Water Act. Maui County has lost in lower courts.

The battle lines were clear during Tuesday’s testimony before the committee.

Those wishing to settle the case before it is heard by the high court worry about the impacts of ocean pollution and say a victory in the case will allow for continued pollution. They do not want Maui to be the poster child for decimating the Clean Water Act and claim a victory would align the county with President Donald Trump’s new Environmental Protection Agency leadership, which has been seen as easing environmental restrictions.

But those wishing for the county to go forward say a decision by the Supreme Court will provide legal clarity with regard to the Clean Water Act. They say withdrawal of the case could have ramifications for cesspool owners, who may face fines and be required to obtain permits, and for the county, which would be required to figure out what to do with the water sent down injection wells and could face costly wastewater upgrades.

In Council Chambers, students from Lahaina Intermediate’s Kula Kaiapuni program dressed in blue shirts and sang in support of settling the case, and other students testified in favor of pulling back the case. Some even had signs that said “Protect Reef” and “Malama Kai.”

Anahera Tevaga, a student at Lahaina Intermediate, said that people need to protect the kai, or the ocean, “not poison it.” “We need to take care of our resource so our next generation will have it as well,” she said.

Kamehameha Schools Maui student Kalena Carpenter teared up while testifying. “I see a lot of people, I can tell majority of them also love the beach,” she said.

But three students from Kamehameha Schools Maui supported the opposite view. One was Cami Nakagawa, who said that the water from the injection wells is not the “sole cause of pollution of Kahekili” Beach Park, which is located makai of the injection wells.

“It’s not the county’s fault that the reefs are dying,” Nakagawa said, noting that overfishing, overpopulation and other issues contribute to the problem.

Also testifying Tuesday morning was Rep. Angus McKelvey, whose district includes West Maui. He discounted claims that cesspool owners would be subject to a National Pollutant Discharge Elimination System permit, as the county has alleged.

McKelvey cited the EPA website for support, and he said the state Department of Health would not require the NPDES permit for residential cesspools.

He added that, if the county wins, the nation could expect a Tweet from Trump thanking Maui County’s “visionary leadership and making America great again.”

State Rep. Tina Wildberger of South Maui also supported withdrawal of the case and noted that the county Democratic Convention voted unanimously on a resolution to urge the county to end its appeal to the Supreme Court. She said the vote included Council Chairwoman Kelly King and members Yuki Lei Sugimura and Tasha Kama.

Scott Rollins, the acting chief of the county Department of Environmental Management’s Wastewater Reclamation Division, said his employees all play in the ocean and live here.

“We are not trying to pollute the ocean,” he said.

While he believes an NPDES permit is not needed for injection wells, the Supreme Court will settle the question, he said. Regardless of the decision, the Victorino administration is committed to recycling the treated wastewater and has 50 percent reused for landscaping and at golf courses.

Isaac Moriwake, an attorney for Earthjustice, said settling the case would bring things to “status quo, as it’s been for a decade.” The county can move forward with getting its NPDES permit, which requires supplying more information to the state Department of Health.

In response to questioning, Moriwake said the plaintiffs never thought it was a good idea to take the case to the Supreme Court but allowed the county to exercise its right.

“We are urging you absolutely, that’s not the right way to go,” Moriwake said.

He believes it is better to “work it out at home.” On cesspools, Moriwake said there are ways to work around that issue so that homeowners don’t need the NPDES permits.

After public testimony, the committee recessed without discussing a resolution by Victorino to authorize a revised settlement in the case. The resolution did not offer specifics, which his administration was prepared to discuss in a closed session with committee members.

Victorino said last week that the proposal is a “way to undo the harm of the lower court’s costly and unworkable decisions.”

Moriwake said Tuesday that plaintiffs have not received any word from Victorino’s administration on the settlement offer.

Victorino said the county is committed to recycling 100 percent of wastewater and not use injection wells, but that goal cannot be reached immediately and will be costly.

Another matter on the committee’s agenda is an older resolution by King to have “all forthcoming settlement offers” in the case be transmitted to the council for approval or disapproval.

In 2014, the U.S. District Court in Hawaii ruled that the county’s use of injection wells was a violation of the federal Clean Water Act.

The county appealed to the 9th U.S. Circuit Court of Appeals and lost in February 2018. The court denied the county’s request to reconsider the ruling in March 2018. However, earlier this year, the U.S. Supreme Court agreed to hear the case. It’s expected to be heard Nov. 6.

With the school year underway, new faculty and staff, and an enrollment of about 440 students, Head of School Maureen Madden has many new ideas and plans for Seabury Hall in hopes of moving forward in a positive direction. The Maui News / DAKOTA GROSSMAN photos

Maui County Council Member Tasha Kama (far right) and fellow council members look on as students from Lahaina Intermediate’s Hawaiian language immersion program prepare to sing during a meeting of the Governance, Ethics and Transparency Committee on Tuesday morning. Testifiers of all ages filled the Council Chambers to discuss the county pulling back a case from the U.S. Supreme Court involving injection wells at the Lahaina Wastewater Reclamation Facility. The Maui News/MELISSA TANJI photo