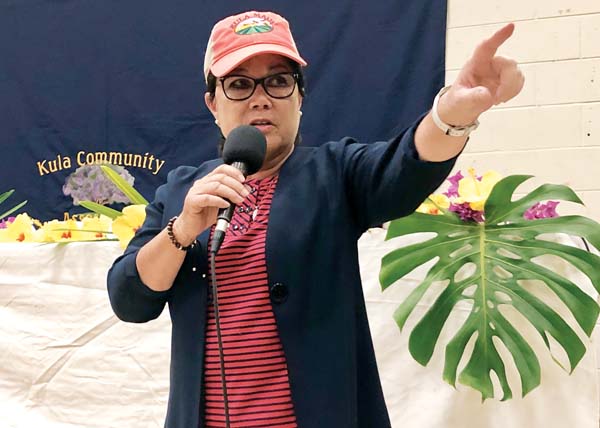 Council Member Alice Lee is proposing to increase county reimbursements and time limits for property owners who are subdividing their properties and must perform waterline improvements. She discusses the draft bill at a Kula Community Association meeting Wednesday night at the Kula Community Center. The Maui News / KEHAULANI CERIZO photo

KULA — The tension over whether the county or the homeowner should foot the bulk of the bill for waterline improvements, especially in Upcountry agricultural areas with no or outdated county infrastructure, continues as two bills are being hashed out in a council committee.

Council Member Alice Lee, chairwoman of the council Water and Infrastructure Committee, is gathering public input as she revises proposals that apply to waterline and existing street work required for homeowners to subdivide.

About 70 people attended, some of whom testified they are already drowning in the high costs of obtaining county water meters due to expensive County Code requirements.

Bill 46 would put a cap on county reimbursements to homeowners for water main extensions. The improvements are needed if water infrastructure is not available for a proposed or existing subdivision; the applicant for the subdivision pays for work to extend a water main from the nearest pipeline.

Currently, the County Code has no dollar limits for reimbursements and has no defined revenue stream to offset possible expenses.

“The need for a cap stems from a desire to control costs on our end to provide us a better avenue which we can budget what we can anticipate in terms of what those reimbursement costs would be,” Kau said at the meeting. “And so if we limit the reimbursement that provides us a better vehicle for budgeting purposes.”

The old ordinance allowed people to have “open-ended contracts” with the county, Lee added.

“We have to be responsible and accountable with our funding,” she said. “We can’t have people owing 20, 30, 40 thousand without any kind of closure or end to the contract.”

On average, people were being reimbursed under $100,000, according to Lee. A few people were caught in a situation where their costs were “well above the $100,000 mark,” she said.

Taomoto said there are only a few instances where a subdivision applicant has paid more than the $250,000 maximum. “Those instances are not very common,” she said.

Kula resident Sherman “Dudley” DePonte told The Maui News last year that he was facing at least $3 million in required improvements for his family subdivision.

He testified about the continuing water meter challenges Upcountry on Wednesday night.

“The idea is we’re all stuck to that (proposed reimbursement) limit,” he said. “Some of us will be able to work with that; some of us won’t.”

Though the rules apply to residents seeking a subdivision countywide, waterline improvement challenges are seen mostly Upcountry due to its agricultural history, Lee said. Also, families that own many acres often look to subdivide for relatives.

Taomoto said the department sees two kinds of meter applications — for an upgrade in domestic service and to subdivide. Meter upgrade requests have lesser requirements. For subdivisions, though, fire protection, along with other mandates in the subdivision section of the water code, can rack up the bill.

A second proposed bill would amend a current exemption that relates to improvements required on existing streets for those subdividing their properties.

It would require improvements to existing streets for a subdivision creating two developable lots, except for an applicant on the priority list for the Upcountry water system who qualifies for the exemption from fire protection mainline infrastructure improvements under a section of the County Code.

Lee said the amendment corrects a mistake made when the rule was passed in 2015. It was meant to exempt people on the Upcountry water meter list but instead the whole county got exempted.

“There’s no way the county can afford that — it’s impossible,” she said. “This particular ordinance was a mistake. Some people feel very upset about it because we are trying to change it back, but it’s the truth, and we are hoping all of you will understand that.”