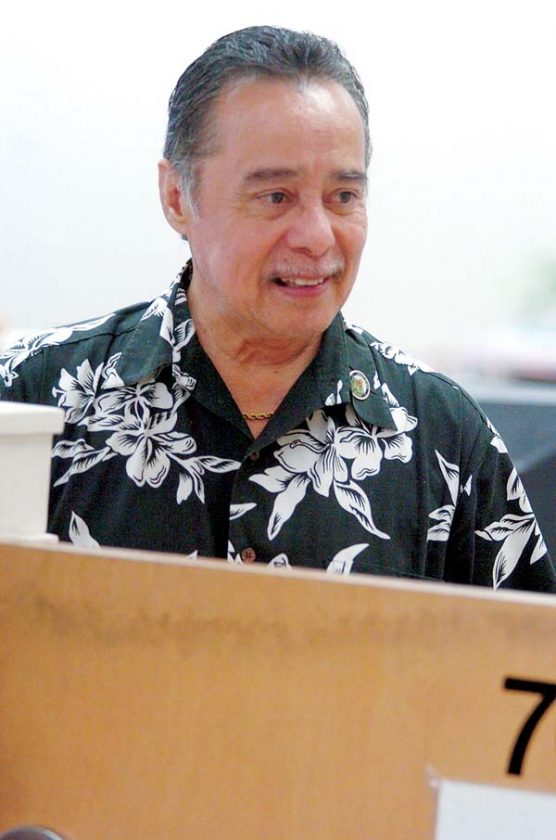 Former Maui County Clerk and longtime Maui County Council Member Danny Mateo was being remembered as a man of action, who could be very serious when working, but also of great wit and humor.

“He loved his family, he loved God, he had plenty faith. He might look like he’s grumpy, (but) once you get to know him, you know he’s hilarious,” Lourdes Ludy Garcia said reflecting on her brother Thursday. “He’ll tell you as it is, whether you want to hear it or not.”

Mateo, 68, died Tuesday, from complications related to a fall, Garcia said. The cause of death was a shock to Garcia and former colleagues because Mateo suffered from a heart condition. This spring, Mateo had a massive heart attack while in Las Vegas.

He had recovered, and Garcia said her younger brother’s heart was good, and he was watching his diet.

Garcia said Thursday that funeral arrangements still were being made.

Mateo was born and raised on Maui but later moved to Molokai. He was an assistant to longtime Council Member Pat Kawano, who held the Molokai residency seat. After Kawano’s death in 2002, Mateo was appointed to Kawano’s seat and was later elected to the job.

Mateo served on the County Council for 10 years and was its chairman for a time. He later served as an executive assistant to former Mayor Alan Arakawa and was appointed Maui County clerk in 2013. He retired from the post in December.

Even before his council appointment, Mateo already was serving the people on Molokai, as director and co-manager of Aloha Festivals on Molokai, a director of the West Molokai Association, and a member of the Molokai Citizens Advisory Committee. He was also a director for the ARC of Maui, which works with people with disabilities.

In 2009, he was named one of 20 Outstanding Filipinos Abroad by Filipino Image magazine, which recognized Filipinos for inspirational and dynamic leadership and promoting a positive Filipino-American image.

Mateo was also the first council member of Filipino descent to be elected as Maui County council chairman.

Council Member Riki Hokama, who served many years with Mateo, said he remembers Mateo even before he got to the council.

“Through the years, one thing that was consistent with Danny, Danny was a doer, he wanted to get things accomplished,” said Hokama, who holds the Lanai residency seat.

Mateo was interested in getting things done, rather than focusing on why something cannot be done, said the council member.

As county clerk, Mateo brought in new technology and was responsible for the upgrade of the Council Chambers lobby, which includes historical displays.

“He enjoyed his family,” Hokama said. “When he was with us socially, Danny was easy to be with. We enjoyed good food and good times. (But) when it came down to work, he was serious as can be.”

Mayor Michael Victorino released a statement Wednesday about the death of his former colleague on the council.

“Mr. Mateo was a consummate professional and a lifelong public servant. Joycelyn and I pray the Mateo family will find comfort even as we grieve his loss during this difficult time. Danny will be missed and remembered for his service to the people of Molokai, Lanai and Maui,” Victorino said.

Garcia offered remembrances of her brother that focused on his finicky palate, sharp mind, community-mindedness and his humor. She will remember her brother making everyone laugh, even as he faced death.

She recalled the time recently when he turned down the Filipino dish pinakbet and salmon. She remembers Mateo saying, ” ‘Nope, I not going eat that. That fish does not have any taste at all.’ ”

Mateo had a quick wit and comeback but was never mean.

“He was very community-minded. He was old school. This millennial stuff, never fly with him,” she said with a laugh.

One of Mateo’s proudest accomplishments was getting the Kaunakakai Fire Station built, she said. Kawano got the “ball rolling,” Garcia said, but Mateo was able to push it through to the finish. The station was blessed in 2011.

“That was his baby, he was so happy,” Garcia said.

Mateo is survived by his wife, Clarissa “Poni,” along with three children and 17 grandchildren, Garcia said.