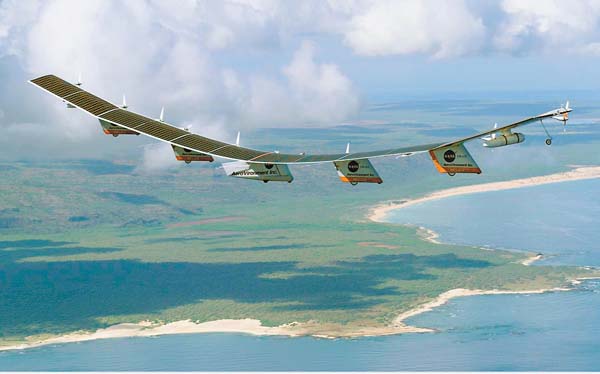 Hawk30, which is about the size of a football field and powered by both electric and solar, completed a successful test flight at Edward Air Force Base in California on Wednesday. The high-altitude drone is expected to be flying over Lanai by March. -- Photo courtesy of GEORGE PURDY

The first stratospheric test flight of the Hawk30 drone that launched Wednesday from Edward Air Force Base in California was “better than expected,” with flights over Lanai as a permanent wireless airborne service platform coming in the near future.

“It flew better than expected. We are excited to share more once the data is reviewed,” said George Purdy, who is co-owner of Drone Services Hawaii and was instrumental in bringing the Hawk30 program to Lanai.

The 256-foot-wide aircraft that basically looks like a long wing is a project run by the University of Hawaii Research Organization, which has a support agreement with program sponsor HAPSMobile Inc.

Solar panels line the wings, as well as 10 propellers, to keep the lightweight drone flying independently in the stratosphere at about 60 mph.

After achieving NASA’s requirements for ground and range safety on Monday, HAPSMobile, a subsidiary of SoftBank Corp. that operates a High Altitude Platform Station (HAPS) business, “received a limited flight release from NASA’s Airworthiness and Flight Safety Review Board to conduct a test flight of the HAWK30 aircraft in restricted airspace,” according to a news release Friday.

An altitude of 80,000 feet was approved, Purdy said, but the exact altitude and flight time was not immediately released after Wednesday’s launch.

After successful operations in California, HAPSMobile plans to transport HAWK30 to Lanai for operations by March 2020, HAPSMobile said. There will be a base camp set up on about 215 acres of old pineapple fields controlled by a subsidiary of Pulama Lanai, billionaire Larry Ellison’s company that owns most of the island.

“The main purpose is to bring telecommunications connectivity to areas that have not been served or are underserved, as is the case in many developing countries, rural areas or remote islands,” said Matthew Nicholson of SoftBank Corp. “With this solution, we hope to bridge the digital divide.”

Commercial services are slated to begin by 2023 with the goal of contributing to Lanai’s environmental conservation and agriculture, Nicholson said.

Earlier efforts to provide 5G services with Hawk30 have been abandoned.

Hawk30 can fly for months at a time, circling an area of 125 miles and providing wireless airborne services to customers and emergency responders. The unmanned aerial system can potentially fly 65,000 to 85,000 feet high in the stratosphere, where there are calmer conditions.

According to HAPSMobile, Hawk30 uses the same frequencies as on-ground services, allowing existing wireless devices to function without any upgrades. Airborne services will not affect current ground service providers.

However, the project needs a “use determination” permit from the Lanai Planning Commission to determine whether Hawk30 activities and the base station are allowed on agricultural land.

The project has not been scheduled yet for the planning commission. The application has been sent out for agency review and comment, said Planning Director Michele McLean, adding that not all the comments have been received so far.

Purdy said he hopes to meet with the Lanai Planning Commission next week after he resubmits information about the Hawk30 drone project.

“We have been holding talk-story meetings to help answer any questions,” he said. “All good response to project.”