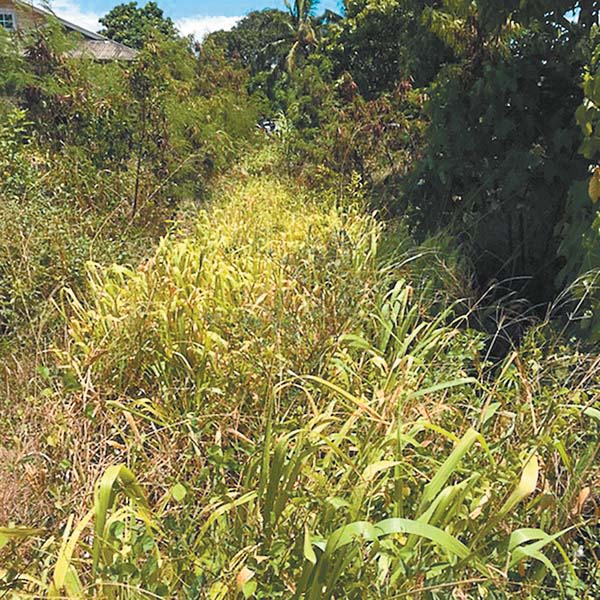 Spreckels Ditch has been overgrown with weeds since Hawaiian Commercial & Sugar Co. shut down in 2016. Mahi Pono recently began clearing out the ditch, which it plans to use for diversified agriculture in Central Maui. Mahi Pono photos

Hui o Na Wai ‘Eha has filed a formal complaint over potential stream flow violations in Waihee River, but the companies that divert from the river and a state hydrologist say that the river gauge is prone to error and that the stream flows are being met.

Hui President Hokuao Pellegrino confirmed that the group filed a complaint with the state water commission on Tuesday, based on water commission data that show Waihee River levels periodically dropping below the interim in-stream flow standard of 10 million gallons a day since Sept. 14.

“Hui o Na Wai ‘Eha does not take violations to the IIFS and breaking the law lightly, especially because we know how critically important sufficient stream flow is for the survivability of our native aquatic species, groundwater aquifer recharge, estuaries/wetlands/eco-systems and the traditional and customary practices of Native Hawaiians who farm on kuleana lands,” the group said in a Facebook post Monday.

Over the past two weeks, hui members have been expressing concerns about falling levels in the Waihee River, Pellegrino said. Part of their concerns stemmed from Mahi Pono’s recent efforts to clean out the Spreckels Ditch, which once diverted water from three Na Wai ‘Eha streams but has been closed and overgrown with weeds since 2016, when Hawaiian Commercial & Sugar Co. shut down. 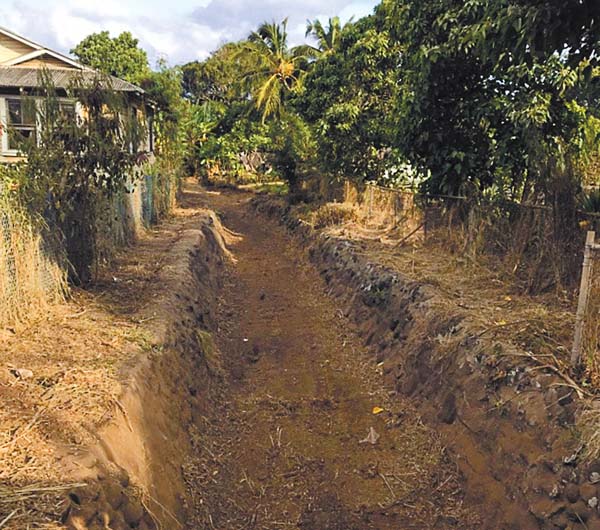 A newly cleared and cleaned Spreckels Ditch is pictured in this photo posted on Mahi Pono’s Facebook page on Sept. 16. Members of Hui o Na Wai ‘Eha were concerned that use of the ditch could be causing water levels in Waihee River to drop, but Mahi Pono said it has only been taking a small amount from Wailuku River, not Waihee River.

Mahi Pono, which purchased the old HC&S fields, recently cleaned out and reopened the ditch, which is capable of diverting water from Waihee, Waiehu and Wailuku waterways, Pellegrino said. The water flows to the Waiale Reservoir behind the Maui Community Correctional Center before being delivered to the fields in Central Maui.

Both Mahi Pono and Wailuku Water Co. draw from the Waihee River, but Pellegrino said he wasn’t yet sure what was causing the water levels to drop.

Grant Nakama, operations manager for Mahi Pono, said Monday that “we have not engaged in any activities that could have triggered lower stream flows in Waihee River.”

“The minimal amount of water that was diverted into the Spreckels Ditch during a 10-day period earlier this month was diverted from Iao Stream (Wailuku River), not the Waihee River,” Nakama said. “This amount of diverted water was small, and our understanding is that the Iao Stream’s flow remained comfortably above the IIFS during this time.”

Nakama did not provide a total amount for the water diverted, but said the water was used “to flush any remaining loose vegetation” out of the ditch and into the reservoir.

In late August and early September, Mahi Pono posted updates on its Facebook page about ongoing work to clean the Spreckels Ditch, which residents had complained was infested with rats and overrun with weeds. Nakama said Monday that Mahi Pono planned to use the ditch “as an irrigation waterway in support of our diversified food crops in Central Maui.” He added that the company “does not have any immediate plans for any other ditch reopenings.”

But, a big concern of hui members is that the Waiale Reservoir can lose 6 to 8 mgd due to seepage, which HC&S was candid about. Pellegrino recalled that HC&S had talked about potentially lining the reservoir or creating a bypass to prevent water loss. When asked what Mahi Pono might do, Nakama said that “we are committed to implementing efficient irrigation methods throughout our agricultural operations.”

“This commitment includes looking for ways to minimize the use of Waiale Reservoir,” Nakama said. “We have already started this process, and all reasonable options are being considered. We hope to implement something soon.”

Wailuku Water Co. is the other entity with diversions on the Waihee River. The company doesn’t use the water for agriculture or other operations, but rather delivers it to other users. President Avery Chumbley countered the claims of falling water levels and said that “stream flows have been well above the IIFS for a continued period of time.”

“We’ve had an extremely dry period and the stream flows are down, but our diversions that we’re taking out of the Waihee system are nowhere near what they have been in the past,” Chumbley said. “The demands and the usage have changed significantly.”

Chumbley said that the Waihee River has two side-by-side diversions — a north diversion and a south diversion. During the massive rains and flooding in September 2016, the south diversion was plugged up “almost 100 percent, and the stream bed got altered significantly.” Since then, the stream has started to flow more toward the north side.

“We’ve never gone in and unplugged (the south diversion) because we didn’t need the volume of water for the users as the demand has reduced significantly, primarily due to no sugar,” Chumbley said.

Chumbley added that the gauges in the streams are not always accurate, and that the heat, as well as big flows, can affect the readings of the gauges, forcing the need for them to be recalibrated from time to time. He said the streams fluctuate by the hour, and that it’s not practical for Wailuku Water Co. to try and control the water levels moment by moment.

“We have to view these things on some period of a rolling average,” Chumbley said of the stream flows.

Ayron Strauch, hydrologist with the state Commission on Water Resource Management, said that staff measured the Waihee River station below Spreckels Ditch at 11:15 a.m. Thursday. Online CWRM data from the same station at the same time reported 11.2 cubic feet per second, or about 7.23 mgd. However, Strauch said that staff who went to the river measured a discharge of 13.22 mgd.

“That is the most accurate reading,” he said.

Strauch explained that the sensor that the online data relies on works by converting a pressure reading to a discharge.

“Like all science, it’s subject to inaccuracies due to the complexities of converting something as complicated as stream flow to a number,” he said. “The real-world pressure measurements by the equipment in the stream are influenced by barometric pressure and atmospheric temperature. Then these readings are converted by an algorithm into a discharge measurement, which has its own level of error. However, we are pretty confident in our current rating model (subject to revision following subsequent measurements).”

Strauch said that the equipment is subject to fluctuating temperatures, and that the reported stream level tends to dip in the middle of the day when the sun heats the equipment, which has happened since the sensor was installed.

“We are working on a solution, but the bottom line is that the IIFS is being met,” Strauch said. “A replacement for the sensor will be expensive, and we are looking at all alternatives.”

Pellegrino, meanwhile, didn’t buy the explanation. If staff measured 13.22 mgd while the online gauge was reporting 7.23 mgd at the same time, the difference is nearly 6 mgd, he said.

“If this is true, the gauge is extremely inaccurate and not calibrated accordingly,” Pellegrino said.

And, he added, if the gauge was subject to heat fluctuations, why hasn’t the stream dropped below 10 mgd at any other time this year? Even during a summer of record-breaking heat on Maui, the Waihee River has stayed above 10 mgd until mid-September, according to the online data.

“If the preliminary data online is inaccurate, why is the commission staff not communicating this with all of the Na Wai ‘Eha stakeholders in a timely manner?” Pellegrino asked. “Having systems in place, such as real-time gauges as mentioned earlier, is the only means in which all off-stream users can be held accountable while fostering transparency within the community.”