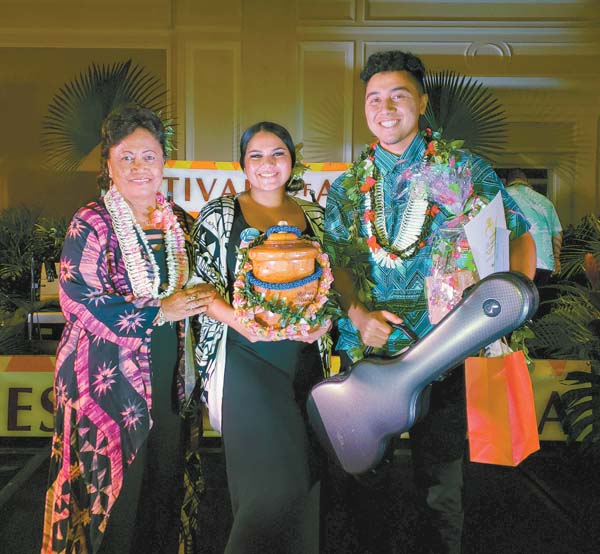 He won a $600 cash award, an opportunity to record a single with Wailau Ryder, a Kanilea Ukulele valued at $1,800, an all-expense-paid trip to perform with 2012 Champion Joshua Noeau Kalima at the eighth Na Hoa Makamaka Charity Concert in Kanagawa, Japan, as well as other prizes.

Mendez is a 2019 graduate of Kamehameha Schools Maui and currently attends the University of Hawaii at Manoa, where he is majoring in Hawaiian language, Hawaiian studies and minoring in music.

Maui’s Kanoa Severson finished second and received a $400 cash award and other prizes.

Troy Hussey of Oahu took third and was named the third Sheldon Keahiawakea Brown Music Award winner. He received a $300 cash award and other prizes.

A Festivals of Aloha, Maui Nui Style event, the Maui falsetto competition was open to amateur male singers across the state who are 18 years or older and have not already released a solo album.

Maui contestants have claimed 11 of the 18 championship titles.

This year’s theme was “E Ho’i Na Wai, E Ho’i ke Aloha i ke Ao,” which translates to “may the waters return, may the love for our world return.”

Judging the music this year was Iwalani Ho’omanawanui Apo and Joshua Noeau Kalima; olelo or Hawaiian language was judged by Kiope Raymond and Kuulei Alcomindras-Palakiko; and Cody Pueo Pata was the head judge.

Up next on the Festivals of Aloha schedule is Aloha Friday at Queen Ka’ahumanu Center from 6 to 8 p.m. Friday. Hawaiian cultural practitioners will present music and hula. Entertainment will include the Kalama Intermediate School Ukulele Band, Kamehameha Schools Maui Ensemble and Mendez.

Lanai’s Hoolaulea will be from 2 to 8 p.m. Sept. 28 at Dole Park. Festivities include exhibits, crafters, food and entertainment. A special late-night Expeditions Ferry from Lanai to Maui is scheduled for 9:15 p.m., which is free with purchase of a festival ribbon.