There were over 400 applications for 81 rental units 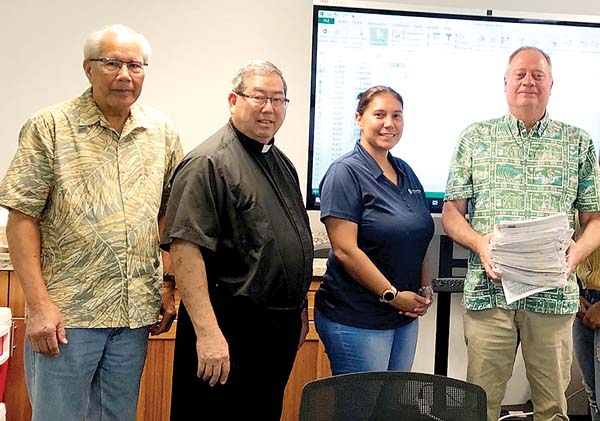 A lottery was held for applicants for the first phase of the Kahului Lani affordable senior rental project, which is set to open in February. Hale Mahaolu received more than 400 applications for the 81 units in the first phase being built by Catholic Charities Housing Development Corp. Shown in this photo are (from left) Stephen Kealoha of Catholic Charities Hawai’i, Monsignor Terrence Watanabe of St. Theresa Church and Hale Mahaolu Lease Up Team members Danie-lyn Oliveira and Mark Renschen.

More than 400 applications were received for the 81 units in the first phase of the Kahului Lani affordable senior rental project currently under construction.

A random lottery assignment of those applications recently was held for the Catholic Charities Housing Development Corp. project.

The first phase of Kahului Lani will include a six-story building with 81 one-bedroom/one-bathroom units and one manager’s unit. Kahului Lani offers low-income seniors ages 55 and older with an affordable rental unit and complementary amenities so they can “age in place,” said a Catholic Charities news release released Wednesday.

Project officials say rents will range from $470 to $875 a month, based on income, with leases renewed annually. Rent includes water and electricity. All units include an oven, garbage disposal, refrigerator, air conditioning and window coverings. Amenities also include laundry rooms and elevators.

It is located across the street from Foodland at Queen Ka’ahumanu Center and the Kahului Public Library.

The target move-in date is February.

The second phase of Kahului Lani will include a six-story building with 83 units and a two-story multipurpose building. The multipurpose facility will include offices for Catholic Charities Hawai’i to provide on-site case management services and programs for residents. Construction is expected to start next year.

About 750 applications were picked up with 400 applications received from Aug. 12 to 30, said Danie-lyn Oliveira, Hale Mahaolu compliance coordinator and Lease Up Team lead. Hale Mahaolu is partnering with Catholic Charities to manage Kahului Lani.

Oliveira said that Hale Mahaolu currently is preparing applications for an eligibility review. Applicants should receive letters with their lottery number and next steps in the process by the end of the month.

“Hale Mahaolu is very happy with the response,” said Oliveira. “Applicants were excited for the opportunity and spoke very favorably of the location.”

Corporation President Rick Stack said: “With Kahului Lani, Catholic Charities Housing Development Corp. is proud to play a role in filling the critical need for affordable senior housing, especially on Maui, where it is desperately needed.”

The corporation is a subsidiary of the nonprofit Catholic Charities Hawai’i and owns, develops and manages real estate properties with the intent to provide affordable housing for the elderly, special needs individuals and other socially or economically disadvantaged people.

Kahului Lani is the first affordable rental project for seniors on Maui built by the corporation.