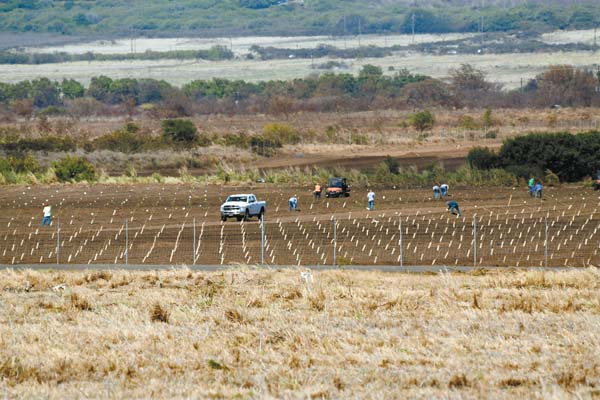 A Mahi Pono crew plants citrus trees last week in Central Maui. The company that purchased more than 40,000 acres of old sugar fields from Alexander & Baldwin in December began planting potatoes last month. At the blessing of the first planting, Mahi Pono officials said that citrus, avocado and macadamia nut trees were set to be among the initial plantings.

2000 QW7, an asteroid with an estimated diameter the length of the Empire State Building, zoomed about 14 lunar distances away from the Earth just before midnight Saturday. The image was created by J.D. Armstrong, who is the Maui technology education and outreach specialist at the University of Hawaii’s Institute for Astronomy, and by Iao Elementary School student Lento Ban. The dot is created by a stacking of images, and stars are streaked and appear as a dotted line, explained Armstrong. The image was taken by the Las Cumbres Observatory, which includes the Faulkes Telescope North atop Haleakala, and another telescope in South Africa. The 2000 QW7 image was captured in South Africa, but the Faulkes Telescope North allowed Maui County students access to live views streamed to their computers. University of Hawaii Institute of Astronomy photo

Katie Healy of FuzionFit jumps to the finish line alongside her teammates during the 48th annual Hana Relay on Saturday. The 52-mile race from Kahului to Hana included 100 teams. Valley Isle Road Runners / JIM LYNCH photo

Summer Mayo will compete in the Rocky Mountain Dressage Society Championships this weekend. The 28-year-old from Lahaina hopes to one day compete in the Olympics, a dream that is only possible after she turned her life around. Sam Loree photo

Summer Mayo poses atop her rescue horse Drizelle. “She was the horse that helped me believe it was OK to start riding again,” Mayo said. Tina Feska photo

Tom Izzo will be bringing his Michigan State Spartans back to the Maui Invitational for the first time since 2010. The Maui News file photo

Blossom Edayan Nunes stands with Deputy Public Defender Rachel Miyoshi in Wailuku District Court on Monday afternoon. Edayan Nunes is charged with hindering prosecution in connection with the shooting of a homeless man early Thursday near the parking lot of the closed Safeway store in Kahului.

Manuel Nunes Jr. appears in Wailuku District Court on Monday afternoon. He is facing attempted murder and other charges in the shooting of another homeless man early Thursday on Hoohana Street near the parking lot of the closed Safeway store in Kahului. The Maui News / LILA FUJIMOTO photos