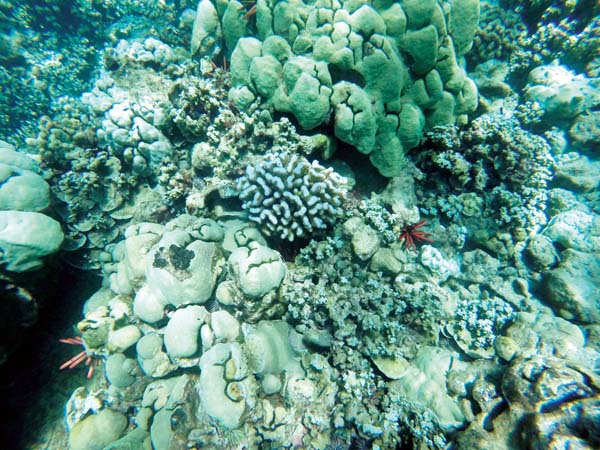 State aquatics officials found signs last week of coral bleaching, such as with this reef off South Maui. When the ocean is too warm, coral will expel algae living in their tissues, causing the coral to turn completely white and appearing bleached. State Department of Land and Natural Resources photo

Coral bleaching already is happening at reefs around Maui and Hawaii island, and scientists fear that if warmer ocean temperatures persist, a repeat of unprecedented bleaching events in 2014 and 2015 may occur.

Meanwhile, scientists and conservation managers are urging people to report coral bleaching sightings, and to help prevent bleaching by avoiding fishing for certain species, reducing contact with coral, keeping chemicals from reaching the shoreline and other measures.

Led by state Department of Natural Land and Resources Division of Aquatics Resources biologist Russell Sparks, the Maui study found about 50 percent of a coral species that makes up much of Molokini’s reef already was bleached or “paling heavily.” Coral in waters off Makena, Wailea and Kihei are showing bleaching in the 10 percent and under range. 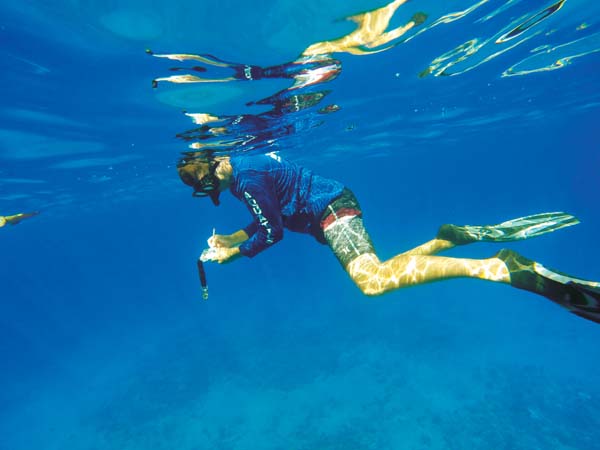 When the ocean is too warm, coral expel algae living in their tissues, causing the coral to turn completely white and appear to be bleached. Coral can survive a bleaching event, but it is left stressed and vulnerable to death.

“Corals are the backbone of the ocean, of fish,” said Adam Wong, Maui education specialist for the division. “If we don’t have the corals, we don’t have the habitats for our fish are not going to be around here. . . . We can, we have to, protect what we have.”

Satellite data from the National Oceanic and Atmospheric Administration Coral Reef Watch program show coral reefs in the Northwestern Hawaiian Islands in a “major bleaching event.” At Kure Atoll, the northernmost atoll in the archipelago, almost 100 percent of shallow-water coral less than 15 feet deep are bleached, NOAA said. Severe coral bleaching is predicted to extend across the Hawaiian archipelago, including the populated main Hawaiian Islands.

“Ocean temperatures are extremely warm right now across the main Hawaiian Islands,” NOAA scientist Jamison Gove said. “They’re up to 3.5 degrees Fahrenheit warmer than what we typically experience this time of year. If the ocean continues to warm even further as predicted, we are likely to witness a repeat of unprecedented bleaching events in 2014 and 2015.”

In addition to warmer waters, other stress factors can impact coral, causing bleaching events or even death. Some of those stressors can be controlled by human activity. Those human stressors include pesticides and other chemicals in runoff, sunscreen use and tourist activity, said Wong.

“There’s a lot of things that’s pressuring the corals,” he said.

Things that can be done to help coral include:

• Not fishing for parrotfish, surgeonfish and other herbivores that help coral reef health.

• Giving fish and coral room when on a reef.

• Standing on sand rather than on the reef.

• Using reef-safe sunscreen, such as ones without oxybenzone or octinoxate that hurt coral.

• Containing chemicals like fertilizers, oil and detergents, and disposing of them properly.

• Anchoring away from reefs and keeping anchor chains off the reef; dropping them in sandy patches or tying into diving moorings.