Number is 4 less than utility originally planned in March 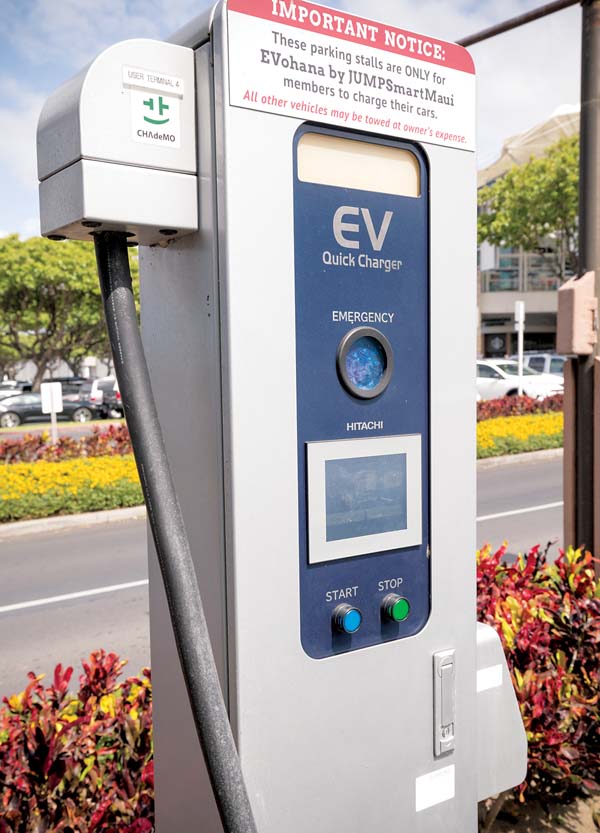 Maui Electric Co. has proposed taking ownership and operation of four electric vehicle fast-charging sites in the existing EVohana network, half the number of sites the utility initially had agreed to in late March.

The agreement, which has to be confirmed by the Public Utilities Commission, involves MECO taking over from Maui Economic Development Board the fast chargers at Queen Ka’ahumanu Center, Pukalani Terrace Center, Piilani Village Shopping Center and Lahaina Aquatic Center.

In an earlier request conditionally approved by the PUC in March, MECO also had planned to take over the chargers at the county building in Wailuku, Haiku Community Center, Maui Tropical Plantation and Kulamalu Town Center. Those stations were not included in the new proposal.

The reason for the change had a lot to do with the cost of capital improvements, and operations and maintenance. While the PUC agreed to the takeover in March, it rejected MECO’s proposed rate schedule for EV charging, which would have left ratepayers picking up all the cost of capital improvements, about $1.2 million, and operations and maintenance costs of $180,000 annually, minus revenues.

The impact on ratepayers was estimated at 19 cents a month and 14 cents with offsetting revenues, MECO said in its PUC filings.

“The companies have worked diligently to reduce the costs for EV-Maui (the four stations in the EVohana network) by, among other things, . . . carefully selecting which sites to move forward with for the EV-Maui tariff,” MECO said in its Aug. 30 filing with the PUC.

“Maui Electric appreciates the commission’s approval of the deferred accounting treatment and its expectation that Maui Electric will manage costs and maximize revenues. However, the shared savings mechanism in this particular case is actually a disincentive to pursue these projects,” MECO said in its filing.

“Maui Electric is nonetheless planning to move forward with these projects in these limited circumstances for the greater purpose of promoting electrification of transportation on Maui,” MECO said.

“The revised rate design incentivizes charging when there is extra generation on the grid, sending appropriate price signals to current and potential EV drivers and is tailored for Maui’s specific grid needs,” MECO said.

The EVohana network is currently a member-only program serving about 320 EV drivers at eight existing sites on the island. To date, there are about 1,000 total EVs registered on Maui.

The island has 10 fast-charging stations, eight with EVohana, one owned and operated by a third party and another by MECO, the utility said in the PUC filing.

The EVohana charging sites initially were established as part of the JUMPSmartMaui demonstration project, a cooperative venture between Japan, the state, the county, Hitachi and MECO. The pilot project operated from 2011 to 2017 to exhibit smart grid technologies that could enable the efficient use of renewable energy on an island grid, MECO said in a news release last week.

At the conclusion of the JUMPSmartMaui project, ownership of the charging assets was transferred to MEDB until a permanent owner and operator of the sites could be confirmed. MEDB partnered with Hitachi to create a new, temporary program called EVohana, with Hitachi ending its participation March 31.

Last fall, a consortium of community and advocacy groups agreed that having MECO sustain the EVohana charging network would be most beneficial to current and future EV users and play an important role in integrating more renewable energy on Maui, the utility said. As part of this updated plan, Maui Electric worked with MEDB, the county and Ulupono Initiative, The Omidyar Group firm that focuses on Hawaii sustainability, on a transition to expedite the transfer of ownership and operation of the selected EVohana sites.

Since March 31, MEDB has temporarily owned and operated the eight EVohana sites.

“MEDB, as a nonprofit organization, took on temporary ownership and operation of the EV charging infrastructure in an effort to keep the network in place,” said Leslie Wilkins, MEDB president and chief executive officer. “We appreciate Maui Electric for stepping up to ensure our island continues to have access to reliable public fast-charging options for EV drivers.

“Without Maui Electric taking on some of these sites, the entire EVohana charging network would have been retired earlier this year.”

In addition to PUC approval, site landowners also have to agree, the utility said.

The four sites were selected based on feedback collected from EVohana members and the community, historic and forecast usage, the cost to upgrade the aging charging infrastructure, and the annual operating and maintenance expenses.

“As we work to add more clean energy to power our islands, EVs can play an important role in further reducing our dependency on fossil fuel and protecting our environment,” said Sharon Suzuki, president of MECO. “We’re pleased to add our support by taking on the four sites with lower charging rates that encourage plugging in when we typically have a lot of solar energy on the electrical system.”