Mother carries on daughter’s passion for life, love of Hawaii 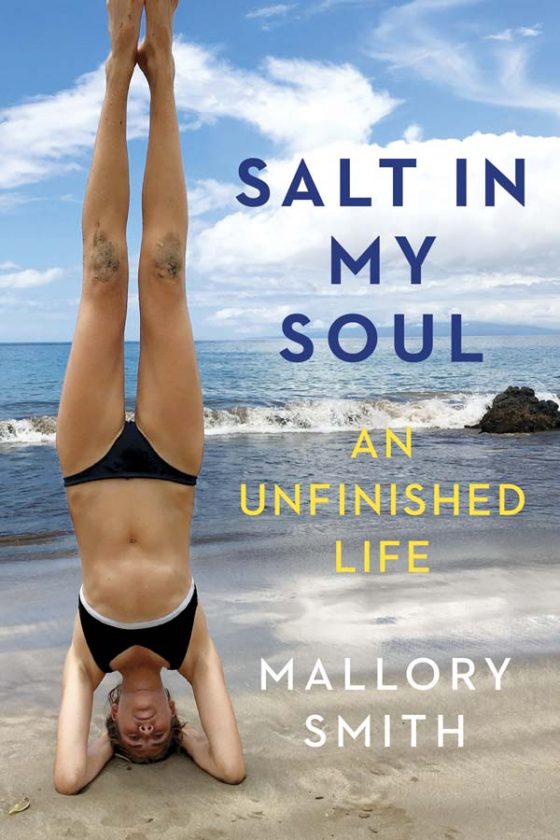 Mallory Smith is pictured on a beach in Wailea on the cover of her memoir, “Salt in My Soul: An Unfinished Life.” Photo courtesy of Diane Shader Smith

PUKALANI — Californian Mallory Smith, who loved the Hawaiian Islands, died at age 25 from an incurable disease that takes its average patient by age 37, but her words continue to speak to people around the world.

Smith’s mother, Diane Shader Smith, spoke last week at King Kekaulike High School to hundreds of students about her daughter’s greatest lessons from the illness, her love for Hawaii and her desire to help others. Shader Smith’s appearance was one of seven talks on Maui to spread the word about “Salt in My Soul: An Unfinished Life,” a memoir based on Smith’s journals from age 15 to 25 published this year by Penguin Random House.

Smith was diagnosed at age 3 with cystic fibrosis, a genetic disease that impacts the lungs and digestive system, making patients vulnerable to repeat infections, which typically become fatal in the end. At age 12, Smith caught a superbug — an antibiotic-resistant bacteria — that would riddle her body with cycles of infection and over a decade later lead to her death.

It didn’t stop her from living life to its fullest, though. 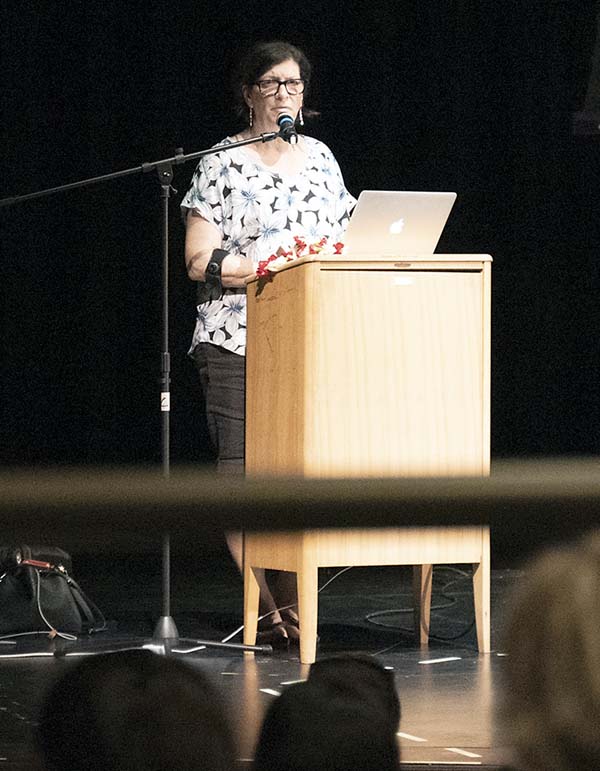 Diane Shader Smith speaks about “Salt in My Soul: An Unfinished Life,” a memoir based on daughter Mallory Smith’s journals from ages 15 to 25 published this year, as hundreds of students listen Wednesday at King Kekaulike High School in Pukalani. Mallory Smith, a Los Angeles resident who visited Hawaii and Maui often, was diagnosed with incurable cystic fibrosis at age 3; she died at age 25 on Nov. 15, 2017, two months after receiving a double-lung transplant. The book shares insights on living a meaningful life despite the challenges of a chronic illness. The Maui News / KEHAULANI CERIZO photo

“Mallory was always smiling,” said Shader Smith, who included family stories with Smith’s dad, Mark, and brother, Micah, during the talk. “She learned early on, with a chronic illness, don’t sweat the small stuff, don’t waste time being angry or upset. Try to do as much as you can. And because of her attitude, she was always surrounded by friends.”

Shader Smith said her daughter, who took 47 trips to Hawaii and who wanted to move to Oahu after her college graduation, viewed the Aloha State as her “happy place.”

In her journal-turned-book, Smith writes about the importance of honu, the Hawaiian sea turtle, in turning around her bouts of depression.

Also, for a college project, Smith wrote about the slow destruction of the Hawaiian ecosystem, and the parallels between her illness and an ailing planet. 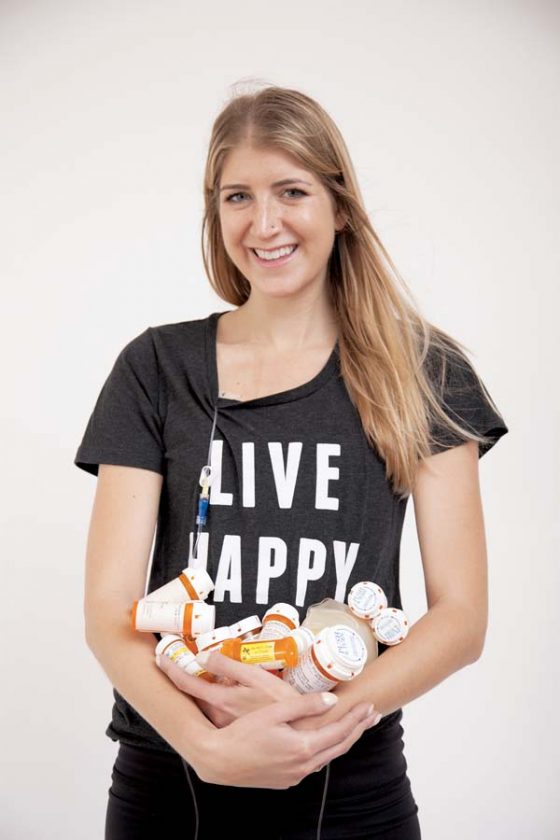 Writer Mallory Smith, whose motto was “Live Happy,” was known for her infectious smile. On the inside, though, an invisible, incurable illness called cystic fibrosis required her to take dozens of pills a day. She died at age 25, but her words are continuing to reach others with her recently published memoir. RUSSIE DENAY photo

Smith would soon become a decorated freelance writer and educator who focused on environmental issues, social justice and health care-related communications, according to Penguin Random House.

“She was an amazing, amazing writer,” Shader Smith said. “She wanted desperately to work in environmental education.”

During the talk, a slideshow of family photos show Smith, who was “tall, beautiful and had crazy long legs,” going through medical treatments, alongside typical high school and college events. On the outside, the young, up-and-coming writer appeared healthy, which was one of the hardest parts of having an “invisible illness,” Shader Smith said.

“Invisible illness is not just (cystic fibrosis),” Shader Smith said. “Whether you have GI (gastrointestinal) problems, mental illness, learning disabilities, the list of conditions that are invisible go on and on. Mallory writes a lot about that.”

“Having an invisible illness was one of the hardest parts for her about having this disease,” she added. “She worried about burdening new friends; she worried about scaring off potential employers.”

After being hospitalized nearly 70 times through the course of her life, once even at Maui Memorial Medical Center during a family trip, she died Nov. 15, 2017, after a battle with the superbug, not long after reaching her 25th birthday and receiving a double lung transplant.

Prior to her transplant, Smith gave her mom access to her password-protected journal, along with specific instructions: If she were to make it, don’t read the journal. If she doesn’t, follow the instructions.

The memoir, “Salt in My Soul: An Unfinished Life,” demonstrates Smith’s wisdom beyond her years and provides an enduring voice for those suffering with chronic or invisible illness. Published in March, the book is available in stores and online.

“Her ‘live happy’ smile hid the darker truth of what it’s like to live with a chronic illness,” Shader Smith said. “Sometimes a heartbreaking tragedy can turn into the a triumph. Mallory’s book leaves us with her wit, her wisdom and her words, the salt in her soul.”