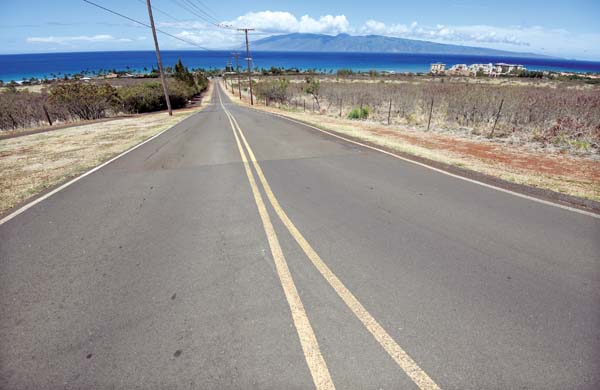 KAHULUI — In June 2006, the state Land Use Commission gave its blessing to a sprawling housing and commercial development next to the Kapalua Airport.

The Pulelehua project came with dozens of conditions, including one that 450 of the 882 units be affordable.

Thirteen years later, the land is still undeveloped, the property has been sold and the owners are coming to the table with a new proposal that would cut the number of affordable units from 450 to 280, or from 51 to 31 percent.

“Actually, I think one of the main contributors of why this project was never built is because 51 percent is not economical,” said Paul Cheng, president of Maui Oceanview LP, which bought the land from Maui Land & Pineapple Co. in 2016.

On Thursday, the state Land Use Commission deferred a decision on whether to amend the original conditions set back in 2006, asking Cheng to go back to the community and bring more evidence of why the old plans wouldn’t pencil out. 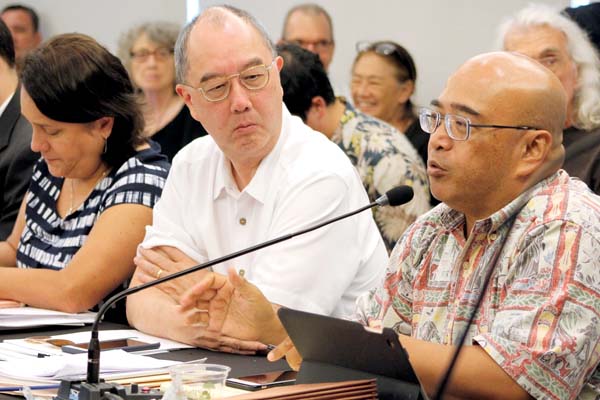 Paul Cheng (center), president of Maui Oceanview LP, listens as his attorney, Maui state Sen. Gil Keith-Agaran, addresses the state Land Use Commission on Thursday at the Maui Arts & Cultural Center. Maui Oceanview LP is seeking to make changes to the 900-unit Pulelehua housing project that came before the commission back in 2006. After a two-day meeting, the commission deferred a decision until December on whether to amend its original decision and order. The Maui News / COLLEEN UECHI photo

As part of an agreement with the county, units would remain affordable for 30 years. If the developer wants to sell the project during that time or at the end of those 30 years, the county would get first priority.

In June 2006, when Maui Land & Pine owned the property, the Land Use Commission issued a decision and order for the project that called for 450 of the units be affordable — 125 to satisfy the affordable requirement of Maui Land & Pine’s Kapalua Mauka development and 325 units for low, low-moderate and moderate income residents at Pulelehua. 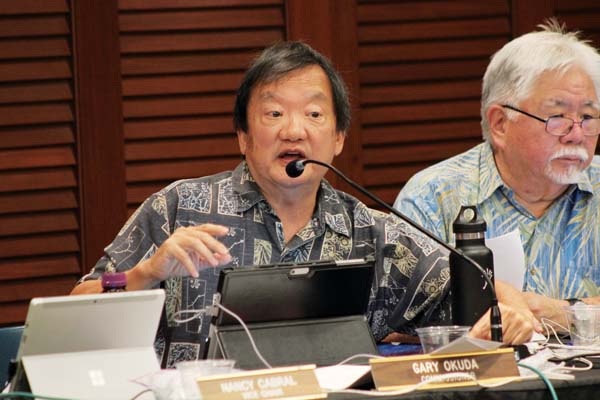 In June 2016, Maui Oceanview LP, a partnership led by Cheng’s Dallas-based USA Infrastructure Investments, purchased the property and all of its land entitlements for $15 million. Cheng, president and chief executive officer of USA Infrastructure Investments, made several changes to the plans, including reducing the number of affordable units, switching to mostly multifamily rentals over single-family homes and slashing 25,000 square feet of commercial space.

Cheng said he decided to focus on rentals after the county and community members highlighted the need for affordable rentals in West Maui. Single-family homes only benefit the first buyers, who later may sell the home at market value and thus take it out of the affordable housing stock for good, Cheng said. Affordable rentals, meanwhile, can benefit multiple residents who may cycle through the unit, and rents will eventually go down as the unit grows older.

He also justified his choice on the affordable reduction — keeping the Kapalua Mauka units at 125 but reducing Pulelehua’s units from 325 to 155 — with the county’s changing affordable housing policy.

Before 2006, the county made affordable agreements with project developers on a case-by-case basis, county Planning Director Michele McLean explained. The council passed a 50 percent affordable housing requirement in December 2006, but after learning that many projects were stalling because of it, they later lowered it to 25 percent in December 2014. (The county calculates 25 percent of the market-rate housing only in a project.)

Cheng said he was told that projects that got land entitlements before the change but hadn’t started yet could abide by the new rules.

“At the time, I thought that the county rule was the . . . predominant rule,” Cheng said. “So I followed the county.”

And, even if Cheng was trying to follow county law, he wouldn’t have to change the project details in order to do so, McLean pointed out. “If he complies with the existing Land Use Commission order, he’s still complying with the county’s affordable housing agreement,” she said.

Testifiers who spoke during the first half of the meeting Wednesday were not happy about the decrease in affordable units.

Lahaina resident Michaellyn Burke said she came from “one of the families who foolishly hung our hopes on Pulelehua being built.” Her mother worked for Maui Land & Pine, and her parents had hoped to buy into the project. Now, her father is no longer alive and her mother can’t afford a home on her own.

“The community has been screaming at the top of our lungs that we need more affordable and attainable housing in West Maui, and the developer thinks that we are going to be OK with proposing less,” Burke said. “Not today.”

Kai Nishiki, chairwoman of the West Maui Community Plan Advisory Committee, asked the commission to wait until the community had updated its plan and the state water commission had decided on West Maui stream flows.

“In the original proposal there was more affordable than market rate homes and a huge park which our community, and especially our keiki, desperately need,” Nishiki said. “This proposal is significantly different from previous proposals, and I would argue that it should undergo further environmental review, as well as reducing the number of market-rate homes.”

Nishiki also brought up concerns with state Sen. Gil Keith-Agaran representing the developer due to concerns about his potential influence over the process.

Keith-Agaran said it wasn’t a problem.

“We’re a part-time Legislature, and so we’re expected to still, for the most part, unless we’re retired, to have other work,” he said after the meeting. “And usually if the work doesn’t interfere with our duties, then it’s not an issue.”

Commissioners decided to take up the project again at a tentative Dec. 4 meeting on Maui. In the meantime, they asked the developer, county and state to:

• Work on the proposed decision and order.

• Explore the need for a supplemental environmental impact statement.

• Show good cause to amend the decision and order.

• Engage with the West Maui community.

Paul Cheng (center), president of Maui Oceanview LP, listens as his attorney, Maui state Sen. Gil Keith-Agaran, addresses the state Land Use Commission on Thursday at the Maui Arts & Cultural Center. Maui Oceanview LP is seeking to make changes to the 900-unit Pulelehua housing project that came before the commission back in 2006. After a two-day meeting, the commission deferred a decision until December on whether to amend its original decision and order. The Maui News / COLLEEN UECHI photo

Jordan Molina was named the new deputy director of the Department of Public Works. County of Maui / ALAN FUKUYAMA photo

Shark bite marks appear on a surfboard of a woman surfing off Kihei on Thursday morning. She was not injured. Maui Fire Department photo