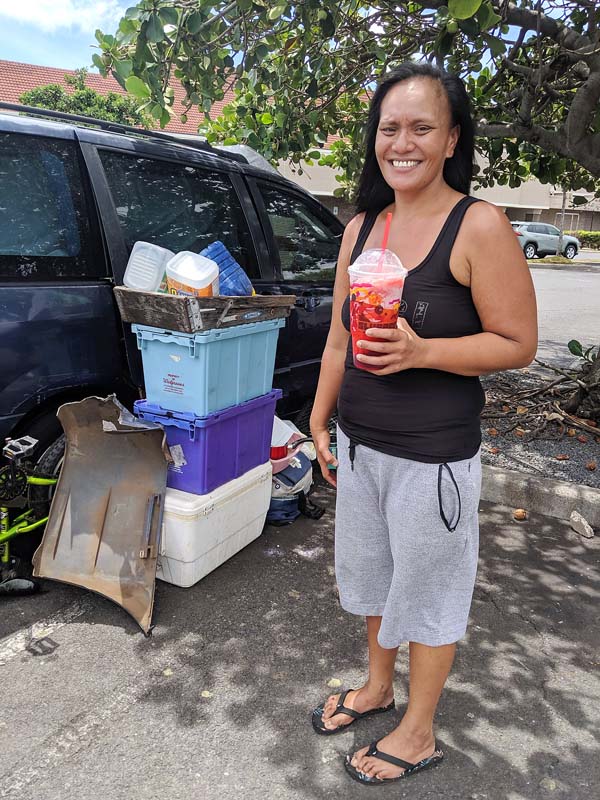 Lacey Novela Pua has been living in the old Safeway parking lot with her girlfriend for about two years. This photo was taken Thursday. -- The Maui News / LILA FUJIMOTO photo

KAHULUI — A piece of leftover crime scene tape hugged the curb in the parking lot of the old Kahului Safeway store Thursday morning, near where a homeless man allegedly shot another homeless man earlier that day and a Kahului man died in a fatal car crash the evening before.

She said that homeless people in the area along Kamehameha Avenue rightfully were concerned after what unfolded in a 12-hour period.

At 5:09 p.m. Wednesday, a white 1996 Acura sedan was traveling north in the side of the parking lot closer to Hoohana Street, police said. The vehicle climbed a raised parking island, passing between two trees before making an abrupt hard turn to the southeast toward the store and hitting the back left side of a parked 2003 blue Mazda passenger van.

The Acura continued southeast, hit a 2006 red Ford Escape and jumped a curb to strike a 2019 white Nissan sedan, police said. The Acura driver, who died in the crash, was identified as Jeremy Tackett, 41, of Kahului. 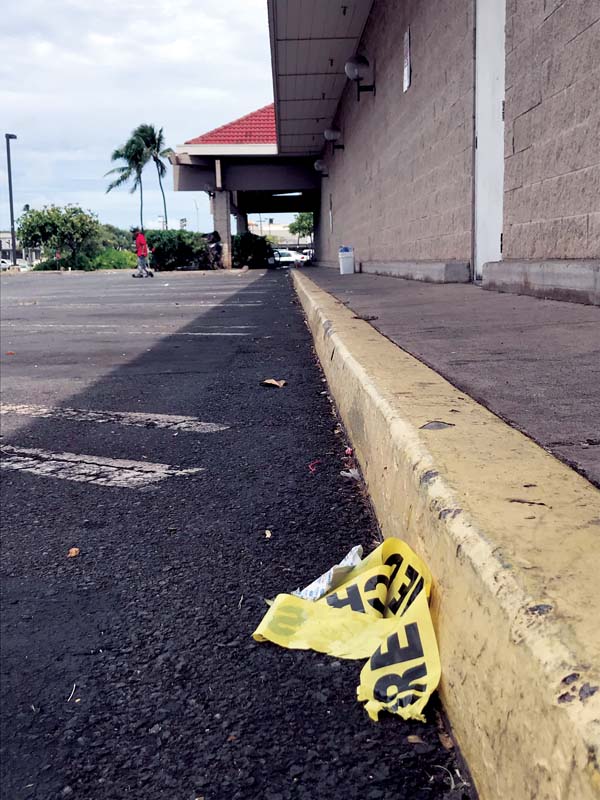 At 4:24 a.m. Thursday, Wailuku patrol officers responded to a call of a shooting in the area of Hoohana Street. The shooting occurred after an altercation on the street in the area between the old Safeway store and Kahului Office Center, police said. The suspect used a 12-gauge shotgun loaded with birdshot to shoot the victim in the upper back and back of his head.

The victim survived the shooting but was hospitalized. A man and woman have been arrested in an attempted murder investigation and remained jailed Friday.

Christy Hughes, who sat in a chair near the shooting scene Thursday with her dogs, said she was “a little” afraid after what happened. She said she was not there at the time of the shooting but returned to the area she often frequents later Thursday morning.

Another woman, who only identified herself as Savannah, said it is the actions of individual people that are scary and not the area itself. She was helping friends move their things out of the area Thursday.

The incidents this week raised questions and concerns on social media and in the community about the commercial site across from Maui Mall, where Safeway closed in July and Ross Dress for Less remains.

It has also drawn the attention of county officials.

“The area where these incidents took place has been plagued with homeless-related issues, and the situation appears to have gotten worse after the closing of Safeway,” said Tasha Kama, chairwoman of the council Affordable Housing Committee and Kahului residency council member. “As a community we should come together to find a way to compassionately and effectively assist our homeless community to find the shelter and help they need.

“I am committed as a County Council member to be part of the solution.”

Kama said Friday that she has reached out to the property owner, The Harry and Jeanette Weinberg Foundation, and learned that lessee Safeway “plans to increase security in the area.”

The property owner and tenants are aware of the issues at the site and say they are working on security.

An official with The Harry and Jeanette Weinberg Foundation said the foundation leases the property to Safeway under a long-term lease and is in contact with them “to ensure that they are fulfilling their legal obligations,” which include “maintaining security and safety onsite.”

“The foundation is committed to working with Safeway in quickly resolving these issues,” said Giorgio Caldarone, managing director of Hawaii real estate for The Harry and Jeanette Weinberg Foundation.

Safeway spokeswoman Wendy Gutshall confirmed that her company continues to lease the location and has security guards stationed at the site to patrol the parking lot 24 hours a day, seven days a week.

“We continue to work with the landlord and partner with the Maui Police Department to help preserve the peace and public safety of our community,” Gutshall said.

A spokeswoman for Ross could not immediately be reached for comment on Friday.

County spokesman Chris Sugidono said that outreach providers have been “actively engaging homeless individuals in the area and know all of them by name.” Since the problem involves private property, it limits the efforts of county providers, he said.

In general, the county administration continues to assist Maui Police Department with its Law Enforcement Assisted Diversion or “LEAD” program that began in May, Sugidono said. The program attempts to divert adult homeless individuals, who may be involved in low-level misdemeanor crimes, from the criminal justice system to services, including substance abuse treatment, mental health counseling, shelter and housing.

Kama said she is in the process of organizing a meeting with officials from the county administration and nonprofit organizations, whose primary mission is addressing homelessness.

“While there are numerous programs in place to help individuals needing assistance with housing, there remain some who continue to slip through the cracks,” she said. “I am very concerned that these two recent incidents represent a substantial escalation of the issue.

“This requires a multiprong approach among government, nonprofit agencies and local businesses who all want to help vulnerable individuals and families while protecting everyone in our community.”

Monique Yamashita, executive director of Ka Hale A Ke Ola Homeless Resource Centers, asked that those who need shelter or rental assistance contact her organization. Her agency does not conduct outreach at the old Safeway area but has a county contract to reach out to homeless people in the Kihei area.

Ka Hale A Ke Ola Homeless Resource Centers, which have shelters in Wailuku and Lahaina, can be reached at 242-HOME.

Obtaining housing may seem difficult to some homeless people, but Ka Hale A Ke Ola can help, Yamashita said.

People are accepted even if they are not clean or sober.

“There is no shame,” she added.

But for Lacey Novela Pua, her girlfriend and others, the paperwork and other issues turn them away from seeking help. They cannot afford market rents and can only hope for a place to open up for $900 a month, which also qualifies for government assistance.

Pua and her girlfriend have been in the old Safeway parking lot for about two years. They try to keep things neat and pick up trash.

There are others, including relatives, who have been at the parking lot from before the store closed on July 19. This included a man who had a job and later found housing.

There are parts of the parking lot, such where the shooting occurred, with bad vibes, she said. They stay in their vehicles closer to the Kamehameha Avenue side of the lot.

* Staff Writer Lila Fujimoto contributed to this report. Melissa Tanji can be reached at mtanji@mauinews.com.