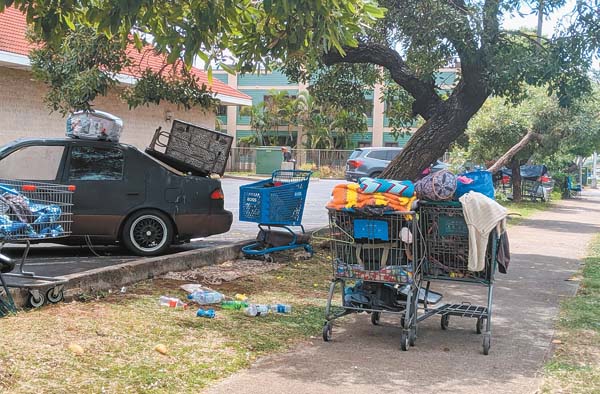 Homeless people’s belongings are loaded into a car and shopping carts near the scene of a shooting early Thursday on Hoohana Street in Kahului. People who had been staying in the parking lot of the closed Safeway store nearby said they were told to leave the property after a homeless man was shot by another homeless man in the street, police said. The Maui News / LILA FUJIMOTO photo

KAHULUI — Police opened an attempted murder investigation into the shooting of a homeless man by another homeless man early Thursday in Kahului. They made two arrests.

Wailuku patrol officers were dispatched to investigate reports of the shooting in the area of Hoohana Street at 4:24 a.m.

The shooting occurred after an altercation on the street in the area between the old Safeway store and Kahului Office Center, police said. The suspect used a 12-gauge shotgun loaded with birdshot to shoot the victim in the upper back and back of his head, police said Thursday night.

After the shooting, the suspect was injured while he was being subdued by other homeless people in the area, police said.

Both the victim and suspect were transported to Maui Memorial Medical Center for treatment of their injuries. Police said the victim remained hospitalized on Thursday night.

The suspect was arrested for attempted murder in the second degree, reckless endangering in the first degree, loaded firearm on highway, place to keep a pistol, place to keep ammunition and ownership/possession of a firearm prohibited.

A woman with the same last name as the suspect was arrested for place to keep ammunition, hindering prosecution in the first degree and tampering with physical evidence.

The man and woman, who were not charged, remained in custody Thursday night.

“Nothing should be that important that you got to use weapons,” said a woman who was moving her belongings from the area around the closed Safeway store Thursday morning after the shooting.

She said she hadn’t been there at the time of the shooting but was told the man was bleeding in the back after being shot.

The woman said she heard that the victim was doing OK. “But he’s limping,” she said. “His body is still aching.”

“To take it to that level, especially if someone was walking away, and in a public area like this,” she said. “Everything about it . . . just horrible.”

“We all associate, maybe not the best of friends but friends enough to help each other,” she said. “It’s awkward where it got to that level where they got mad.”

A man who was in the area said he heard the shot.

He said what happened “was one misunderstanding.”

Some people who were sleeping in their vehicles in another part of the parking lot fronting the old Safeway said they were awakened by what sounded like a shot. One woman said she heard people “yelling and running and attacking each other” both before and after the shot.

She said a crowd of younger people, mainly in their 20s, had been staying in the part of the parking lot on the Hoohana Street side of the Safeway store near where the shooting occurred. Some had moved to the location from Keopuolani Park after the county closed the park for a cleanup in July, the woman said.

On Thursday morning, homeless people were clearing their belongings from the area near the closed Safeway store. A police officer drove through the parking lot telling people they had to leave.

* Lee Imada contributed to this report. Lila Fujimoto can be reached at lfujimoto@mauinews.com.

Council Member Alice Lee is proposing to increase county reimbursements and time limits for property owners who are subdividing their properties and must perform waterline improvements. She discusses the draft bill at a Kula Community Association meeting Wednesday night at the Kula Community Center. The Maui News / KEHAULANI CERIZO photo

Auwahi Wind Energy, which owns the 21-megawatt Auwahi wind farm on Ulupalakua Ranch land, has been allowed to increase the number of bats deaths to 140 by 2037. This photo was taken in 2016. The Maui News / MATTHEW THAYER photo

With more than two decades of experience as a stage manager, drama teacher, director and actress, Tina Kailiponi knows her way around a theater.

The play’s the thing for Tina Kailiponi, who is directing the ProArts production of “Strangers on a Train,” which opens tonight at the ProArts Playhouse in Kihei. Jack Grace Photography photo

Homeless people’s belongings are loaded into a car and shopping carts near the scene of a shooting early Thursday on Hoohana Street in Kahului. People who had been staying in the parking lot of the closed Safeway store nearby said they were told to leave the property after a homeless man was shot by another homeless man in the street, police said. The Maui News / LILA FUJIMOTO photo