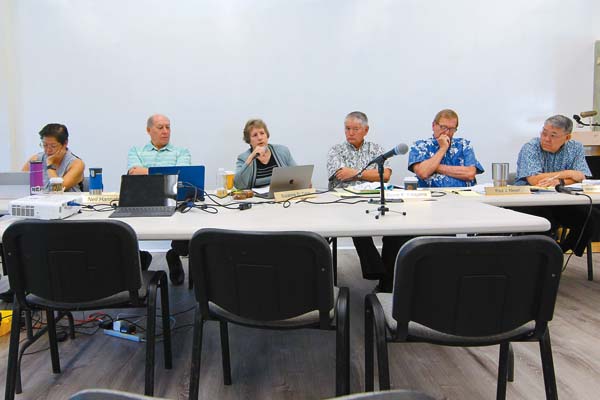 Suzanne Case, chairwoman of the state Department of Land and Natural Resources, leads out a meeting of the state Commission on Water Resource Management on Thursday at the J. Walter Cameron Center in Wailuku. The commission approved a permit on Thursday for East Maui Irrigation Co.’s request to remove the next series of diversions on East Maui streams. The Maui News / COLLEEN UECHI photo

WAILUKU — The state water commission has given East Maui Irrigation Co. the go-ahead to to take down the next series of stream diversions that it once used to transport water to the central valley to feed sugar cane crops.

On Thursday, the state Commission on Water Resource Management approved a permit for EMI to remove and abandon 11 diversions on the Honopou, Hanehoi (Puolua) and Pi’ina’au (Palauhulu) streams.

“I think we all should understand that this is a work in progress,” commissioner Paul Meyer said. “It’s very difficult if not impossible to try to put four corners on an extensive and very involved project like this. And I think we need to count on the staff and commission to continue to follow the situation as it evolves and as the work is completed.”

The approval is the latest step in a long process to remove the many diversions that EMI’s parent company, Alexander & Baldwin, relied on for more than a century to draw water from East Maui streams for Hawaiian Commercial & Sugar Co. operations in Central Maui.

In June 2018, the commission ordered full restoration to 10 of those streams and limited or no diversions for another seven streams. A&B divided the restoration work into four categories, each requiring extensively more work in order to restore stream flow, commission staff explained earlier this year.

EMI Operations Manager Mark Vaught said Thursday that Category 1 is almost done and will likely be finished by the end of September. Category 2 will start after and is projected to be finished by March 31. (It has a permit but needs a final check with the state Department of Health, Clean Water Branch before field work can start.) Work on Category 3 will take place from March 31 to September 2020. A&B officials cautioned that this was an “optimistic” timeline.

The permit that the commission approved Thursday was for Category 3, which includes the following:

• Seven of the diversions will require building an overpass over a ditch to allow the stream to flow freely. Plans call for installing a pipe (concrete or plastic depending on the diversion) no more than 24 inches in diameter through which the stream can pass over the ditch. The pipe will extend under an existing access road located below (makai of) the ditch, and will discharge into the streambed downstream of the road. The work may require a small excavator, which would operate from the streambed.

• Diversion No. 3 will require filling in the grate opening at the top of a diversion with concrete/grout. An existing plate bolted on the diversion that was installed to provide a low-flow channel over the diversion also will be removed. Openings below the grate on the downstream side will be filled with stream rocks and concrete. Finally, to prevent water from overflowing into the ditch during high flows, an existing wingwall on the west end of the diversion will be extended to just beyond the downstream edge of the ditch using concrete and stream rocks.

• Diversion No. 8 includes an unlined channel that intercepts the stream. Thus, a pipe and headwalls will be laid in the ditch where it intercepts the stream and a concrete overpass. The existing access road below (makai of) the ditch would need to be partially excavated to allow the stream to flow over the road after it passes over the ditch. Concrete riprap will be added to the road to armor it and prevent it from washing out. This work may require a small excavator. An existing 8-inch PVC pipe currently installed as a temporary bypass will be removed and disposed off site.

• At Diversion No. 10, a concrete and stone dam/ditch will be removed from the stream and deposited in an upland area.

• At Diversion No. 11, a concrete open-channel overpass will be built over the ditch.

Meredith Ching, executive vice president of external affairs for A&B, said that after the commission’s orders to restore stream flow, the company initially opened and closed gates to redirect water back into streams instead of the ditches. She estimated that achieved “90 to 95 percent water return,” but that “the last 5 to 10 percent was a lot more difficult,” at times involving almost construction-type work that required reviews.

Vaught didn’t have preliminary cost estimates but said that “just by the size of some of the projects” that the company would have to contract out the work. (One particular diversion could cost up to $200,000.)

“Much of the other work we can undertake ourselves,” he said. “So it would just be limited to operating costs . . . and materials.”

With the permit approved, EMI must now consult with several state and county agencies before it can actually begin work, explained Sean O’Keefe, director of environmental affairs for A&B. Officials must submit detailed construction plans to the water commission staff and consult with the U.S. Army Corp of Engineers, the state Office of Conservation and Coastal Lands, the Clean Water Branch, the county Planning Department and the U.S. Fish and Wildlife Service.

“This is like step 1 of getting these diversions fixed,” O’Keefe said. “All of that has to (be done) before we can do anything in the field.”

8 Colleen Uechi can be reached at cuechi@mauinews.com.