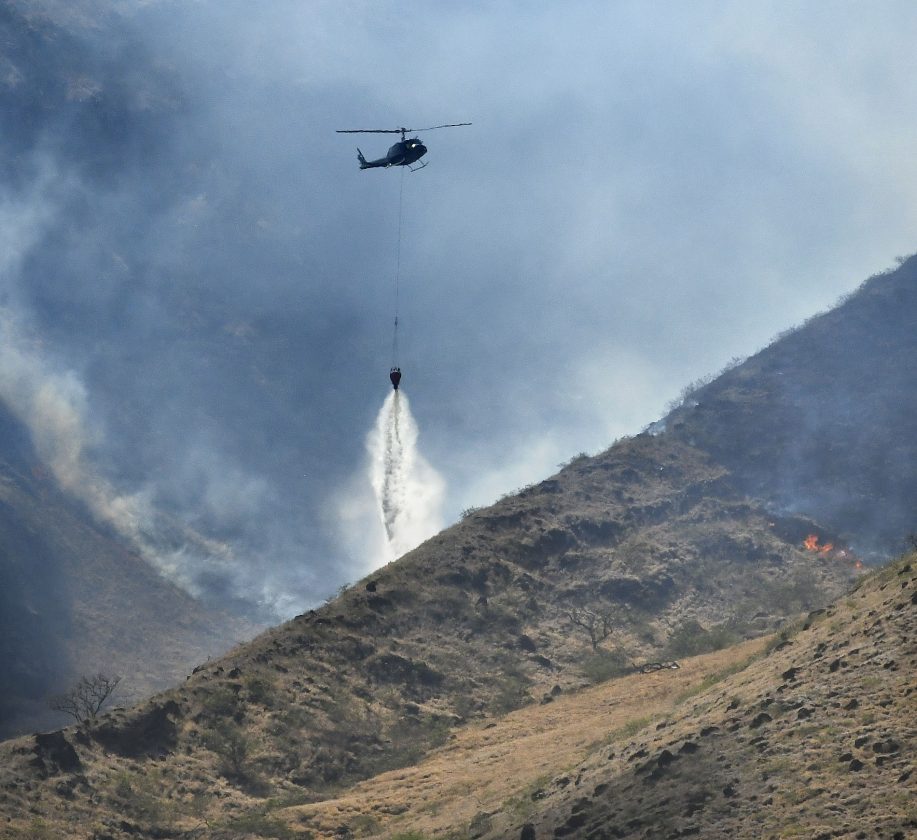 A helicopter pilot drops a load of water on Wednesday’s brush fire high in the West Maui Mountains above Maalaea. Parched conditions and whipping winds fueled the fast-moving blaze, which started high on the mountain and closed Honoapiilani Highway on the pali. The fire had burned 4,000 acres by nightfall. The Maui News / MATTHEW THAYER photo

12:14 A.M. UPDATE: Honoapiilani and Kahekili highways have been reopened in both directions by Maui Police Department.

The fire is still burning however it is not threatening Honoapiilani at this time, according to MPD.

10 P.M. UPDATE: Fueled by strong winds on “extremely steep” mountain slopes above Maalaea, a morning brush fire grew from 5 acres to 4,100 acres by 9 p.m. Wednesday, forcing a handful of evacuations, closing off major arteries in and out of Lahaina and impacting West Maui businesses and travel plans.

Homes on Maalaea Bay Place, a small neighborhood makai of Honoapiilani Highway near Maalaea Small Boat Harbor, were evacuated around 4:45 p.m. Kaheawa Wind Power employees and Na Pali Trail hikers were evacuated earlier in the day, according to the Maui Fire Department. 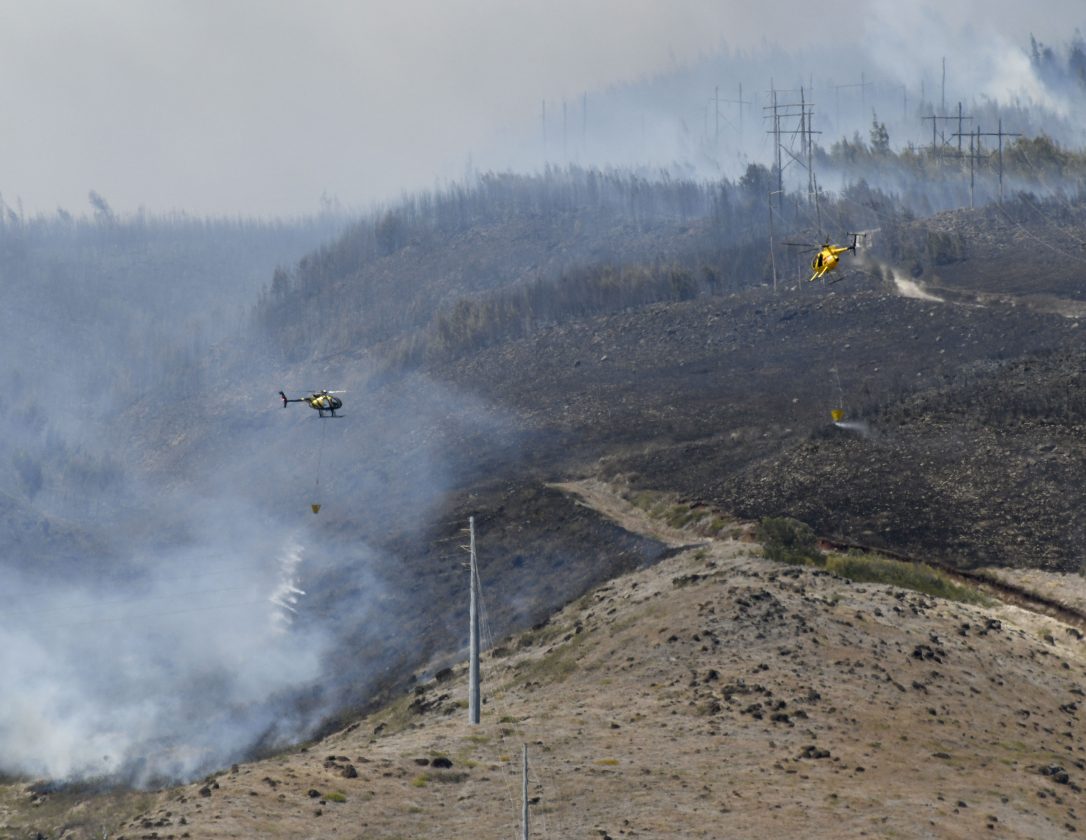 Two overnight shelters and one temporary shelter were opened by 7 p.m., the county said.

First reported at 9:10 a.m. on the upper slopes of the West Maui Mountains in the vicinity of North Kihei Road and Honoapiilani Highway, the “Maalaea Mauka” fire initially covered about 5 acres.

The blaze fed on 15 to 20 mph gusts, fire officials said. By nightfall, the fire had burned more than 4,100 acres, traveled across the pali and reached Papalaua Wayside Park on the Ukumehame side of the mountain.

As the blaze made its way along the pali, the narrow coastal strip of Honoapiilani Highway that connects Central and West Maui, unsafe conditions forced the Maui Police Department to close the road. 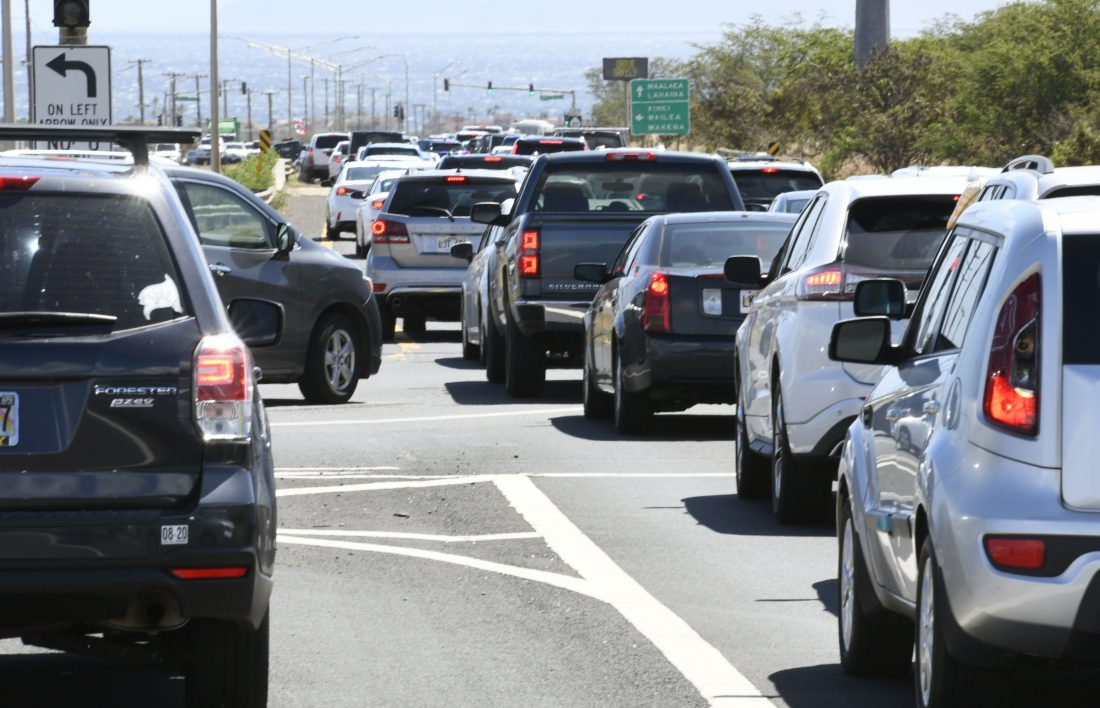 With Honoapiilani Highway blocked off due to a massive brush fire Wednesday, traffic was backed up on both sides of the pali, including at the North Kihei Road intersection. The road was opened to contra-flow at about 9 p.m. The Maui News / MATTHEW THAYER photo

Traffic toward Central Maui was intermittently allowed through, the county said, but thick smoke and low visibility would again completely close the pali section of highway. Honoapiilani Highway at North Kihei Road near Maalaea and at Luawai Street in Olowalu were closed.

At about 9 p.m., police announced the opening of the makai lane of Honoapiilani Highway between Maalaea and Ukumehame.

“Motorists are asked to exercise patience as we try to move traffic through the area. The public is asked to please follow the instructions of police officers,” the 9 p.m. county news release said.

Police also noted that the contra-flow of traffic will be maintained as long as fire conditions permit.

On the back side of Lahaina, Kahekili Highway at Mile Post 7 in Kahakuloa and Nakalele Point was partially closed, with traffic alternating every half-hour, according to the county. The road was eventually closed. 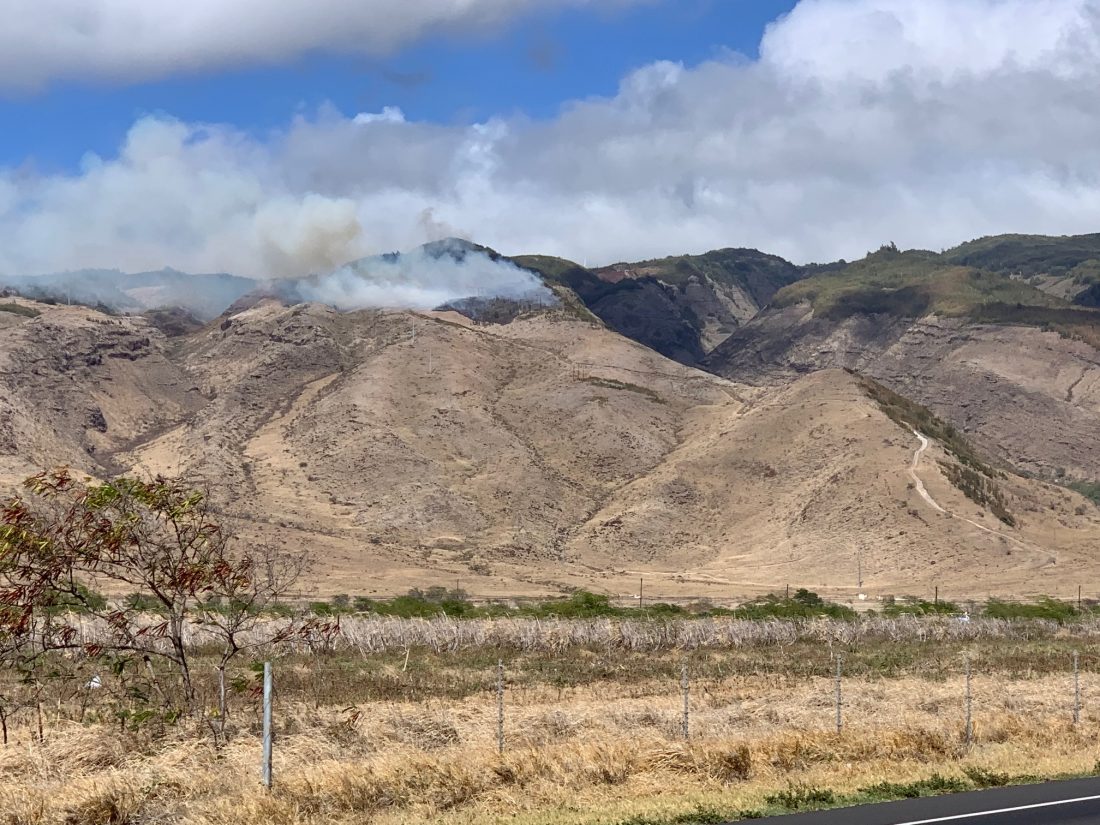 It was bumper to bumper at the North Kihei Road intersection of Honoapiilani Highway. Some drivers eventually chose to turn back rather than wait in the line of cars, leading some motorists to falsely believe the road was open and traffic was moving.

With Lahaina mostly cut off, area businesses, residents and visitors felt the repercussions by late afternoon.

Old Lahaina Luau sales manager Chase Rogers said that business was “definitely impacted” by the fire, but that the company has dealt with similar situations from fires to weather events in the past.

Fifteen to 20 staff members who live outside Lahaina were not able to get to work, and 100 to 150 reservations had to be canceled, refunded or rescheduled because of the fire and road closures, Rogers said.

“Some (guests) are going to wait it out to see if they can get in to Lahaina,” he said Wednesday afternoon.

Lahaina Grill office manager Sheri Munoz also said the fire was affecting the restaurant near Front Street. Two staffers could not make it to work and close to 20 guests had to cancel reservations.

“We have tried to reschedule most of them, but for some, it’s their last night,” Munoz said.

Kimo’s spokesman Jack Starr echoed that its Front Street restaurant had guest cancellations and employees who couldn’t make it to work due to the fire.

The county advised visitors needing to catch a flight to call their airlines “in the case that the brush fire closes the highway for an extended period of time, and they are unable to reach the airport.”

“I want to ask all of our visitors and residents to stay away from the pali area and not to drive to the west side,” Mayor Michael Victorino said. “Heavy smoke and strong winds are making visibility very difficult and the speed of the fire poses a serious safety hazard to the public.

“I will be doing everything I can to provide the support our first responders need, and I’m very grateful for their efforts.”

The mayor noted that 200 passengers from a cruise ship docked off Lahaina took a day trip to Central Maui “and are now stuck.”

The county announced that three shelters, one temporary, were scheduled to open, including Lahaina’s Princess Nahienaena Elementary School and Maui High School in Kahului at 7 p.m., along with Wailuku’s Velma McWayne Santos Community Center from 6:30 to 9 p.m.

County spokesman Chris Sugidono reported more than 220 people were at the Maui High and Princess Nahienaena shelters at about 9 p.m. About 200 were at the Maui High shelter, mostly visitors, he said. They were either recent arrivals who would eventually make their way to their west side hotels or passengers flying out waiting for their flight crews to arrive at Kahului Airport from the west side.

Kings Cathedral at the crossroads of Maui Veterans Highway, Puunene Avenue, Kuihelani Highway and Airport Access Road opened for food only, not as a shelter, Wednesday, the county said.

The fire also led to the cancellation of a Maui Interscholastic League girls volleyball game Wednesday afternoon. Maui Preparatory Academy could not make its match with St. Anthony at Wailuku Gym. It had not been determined Wednesday when the game would be rescheduled.

Meanwhile, 18,300 Maui Electric Co. customers around the island lost power at 11:15 a.m. due to a loss in wind generation provided by Kaheawa Wind Power, an independent energy partner, MECO said. The event triggered an interruption of service to multiple circuits to protect the “island’s electrical system from further damage,” the utility said.

The cause for the drop in wind generation was still being assessed, according to MECO spokeswoman Shayna Decker, though firefighters had said that the Kaheawa Wind facility had been evacuated due to the fire.

Power was restored to all customers by 11:40 a.m, Decker said.

Fire personnel were monitoring the fire throughout the night and into Thursday morning, the county said.

A helicopter pilot drops a load of water on Wednesday’s brush fire high in the West Maui Mountains above Maalaea. Parched conditions and whipping winds fueled the fast-moving blaze, which started high on the mountain and closed Honoapiilani Highway on the pali. The fire had burned 4,000 acres by nightfall. The Maui News / MATTHEW THAYER photo

With Honoapiilani Highway blocked off due to a massive brush fire Wednesday, traffic was backed up on both sides of the pali, including at the North Kihei Road intersection. The road was opened to contra-flow at about 9 p.m. The Maui News / MATTHEW THAYER photo