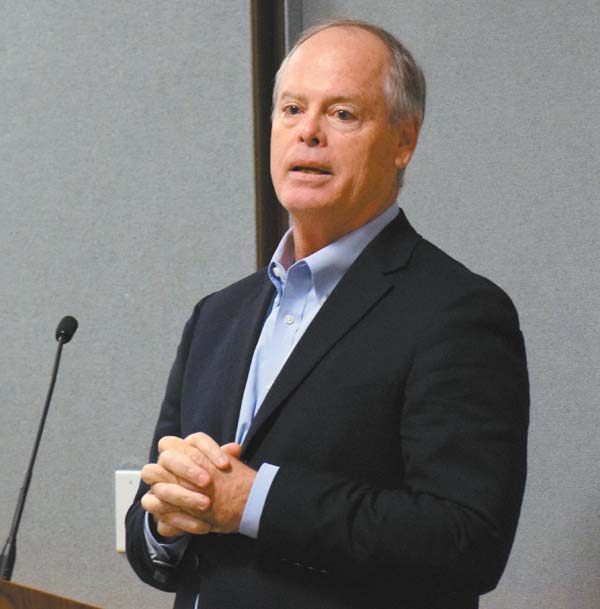 Tim O’Laughlin, water rights lawyer, appears at a California meeting in 2018. He has been named the new chief operating officer for Mahi Pono. Mountain Democrat photo

Tsutsui, who has been the face of Mahi Pono and has served as community liaison, will continue overseeing government relations, business strategy, management operations, communications and sales and distribution.

“I look forward to joining the Mahi Pono management team, and I’m relying heavily on our local team, especially Shan,” O’Laughlin said in a response to questions from The Maui News. “This is the natural evolution of Mahi Pono as we have grown from 23 employees in March with no planted acreage to projected plantings of more than 4,000 acres of food crops and 200 employees in 2020.”

O’Laughlin is the founder of the California-based legal firm, O’Laughlin & Paris LLP, and has 15 years of experience in water law and public agency representation, the law firm’s website says. He has represented clients with cases before federal and state judicial, administrative and regulatory bodies, including the California State Water Resources Control Board.

O’Laughlin is in the process of moving to Maui full-time, but he will “continue to be affiliated with his firm,” Mahi Pono said.

With his firm, O’Laughlin has advised clients on water, land use, planning and environmental matters and has “extensive experience” as general counsel to public agencies. Also, he regularly attended meetings of clients’ governing boards to advise them on the requirements of open meeting laws and election requirements, as well as on their general powers, rights and obligations, the law firm website said.

The website also pointed out that O’Laughlin has been lead counsel for the San Joaquin River Group Authority in the Bay-Delta Water Rights hearing, which sets objectives to protect uses of water in the watershed, including drinking water and irrigation supply, and fish and wildlife habitat.

O’Laughlin received his bachelor’s degree in political science from University of California, Berkeley, and his law degree from Santa Clara University.

He has been married to wife, Paula, a high school counselor, for 33 years; together they have two sons, Danny and Brad, Mahi Pono said.

The state Board of Land and Natural Resources granted another one-year lease through 2020 to allow EMI to divert water from state land in East Maui to Mahi Pono farming operations in Upcountry and Central Maui. A&B also recently released a draft environmental impact statement as part of a request for a 30-year East Maui water lease.

Mahi Pono also is in proceedings with the state for water rights in four streams in the West Maui Mountains.