Testifiers are concerned about water, number of workforce units 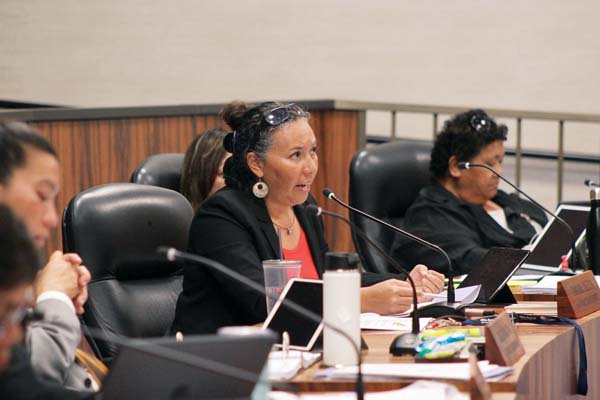 Maui County Council Member Tamara Paltin, who holds the West Maui residency seat, speaks against the Makila Farms project, a proposed mix of market-rate and affordable homes in Lahaina, during the council’s meeting on Friday. The council voted 5-4 on Friday to approve the project. The Maui News / COLLEEN UECHI photos

WAILUKU — The Maui County Council approved a 34-unit project in Launiupoko on Friday, in an area that’s long been contentious for housing projects due to issues of water, fire and traffic.

Developer Greg Brown’s Makila Farms project calls for 19 residential workforce housing units on single-family lots of 2 acres and 15 market-rate agricultural lots also on 2 acres. The 76-acre project would be located in Launiupoko, mauka of Honoapiilani Highway and the Lahaina bypass.

“I feel very satisfied that we have tried our best to add conditions and safeguards to make this a better project,” Lee said. “After weighing both sides, I will vote in favor of this project. And I know a lot of people still have some questions, and I hope those questions will be answered satisfactorily. More than anything, I wish all of the lucky families who will live in Makila Farms great success in their new homes.”

Paltin, who holds the West Maui residency seat, was brought to tears after the vote on Friday. 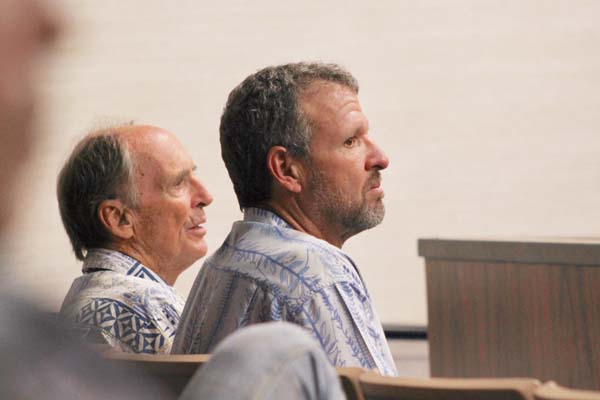 Brown’s development sits on land that was once part of a 271-acre development known as Makila Rural Community that proposed 150 rural residential lots. Makila Land Co. pulled the plug on the project in 2016 and sold the lots, including some to Brown.

Portions of the original project have returned to the council in different forms. In July, the council voted 6-3 to disapprove developer Peter Martin’s Polanui Gardens and Makila Rural-East projects, which proposed a combined 96 workforce units and 61 market-rate units in Launiupoko.

On Friday, many testifiers brought up the same issues that sank Martin’s projects. Kuleana families in Kauaula Valley cited drying streambeds and lack of water for their crops. Launiupoko residents pointed to restrictions that limit half the community to water on Mondays, Wednesdays and Fridays, while the other half gets water on alternating days. But nobody has water, they said.

“I am sorry to the developers, but they got shammed,” said Kauaula Valley resident Daniel Palakiko. “They bought into a system and property in a place that couldn’t support what they intended to do with the properties that they purchased. Cause never have the water. Never have ’em then and not going have ’em now.”

Others expressed concerns with the high winds and fire hazards in the area. They asked the council to hold off a decision until the West Maui Community Plan could be updated.

Testifiers in support said that given the housing crisis, West Maui couldn’t afford to wait. They said Brown had made several changes to the project since it last came before the council.

“Yes, absolutely, we need more housing than what is being offered, but this is a start,” Sasha Taylor said. “If we’re in a housing crisis mode, then we need housing now.”

Makila Farms is a scaled-down version of Makila Kai, a proposed development of 25 workforce units and 24 market-rate agricultural lots that came to a halt in a council committee in 2017. This time around, Brown is proposing 100 percent agricultural and lowering the affordability bracket from 80 to 140 percent of area median income to 50 to 100 percent.

However, making the project completely agricultural required increasing the lot sizes and decreasing the number of homes. Council members opposed to the project didn’t think 19 homes warranted the exemptions that come with the fast-track process.

“We’re going to make all these exemptions for 19,” Rawlins-Fernandez said. “Waikapu Country Town — 1,400 (homes). Kaiaulu o Kupuohi — 89. And then we’re going to make the community, make the generational families feel dismissed, ignored and stepped on for 19 houses.”

But Molina liked that the project was less dense than others proposed in the same area. He said that he had “yet to see a perfect housing project, one without criticism.”

“Unfortunately, it’s just the timing of everything coming down right now,” Molina said. “It’s all landing on us, and you’re sort of damned if you do, damned if you don’t. We’re in these positions of having to make some tough calls, and sometimes our calls are not perfect, just like housing projects. There is no perfect housing project.”

Makila Farms comes with 24 conditions, including that the project must:

• Start construction of the workforce units within five years and finish them within 10 years.

• Develop a well for nonpotable irrigation and avoid using Kauaula Stream for potable or nonpotable purposes.

• Use aerobic treatment units (ATUs) in its individual wastewater systems.

• Keep the workforce units owner-occupied for 30 years and require any resales to stay in the same affordability bracket with short-term rentals prohibited.

The market-rate lots are expected to be sold out in about 18 months, but full buildout of the lots is expected to take about 10 years.

Infrastructure costs are estimated at $5 million, while total residential construction cost is projected at $35 million.