Money goes to processing plant on the Big Island 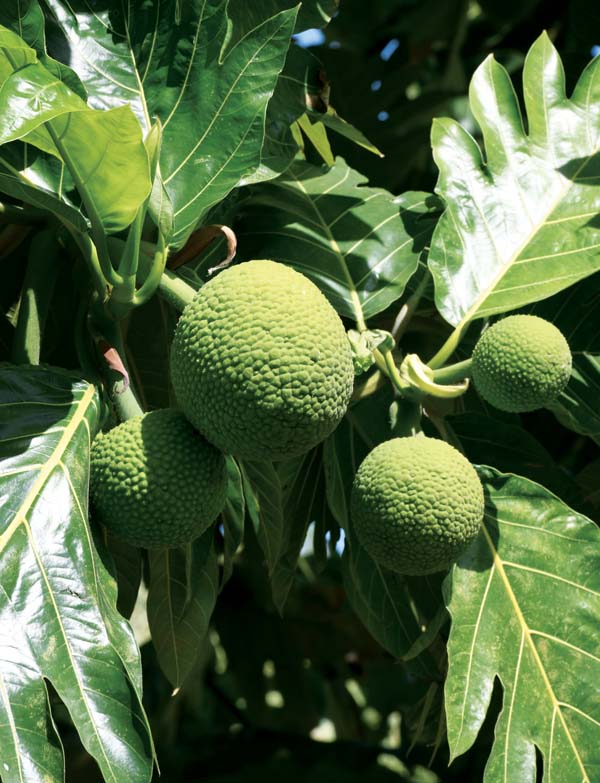 Breadfruit, hailed for its versatility, has hundreds of varieties and packs more nutrients than white rice and white potatoes. This photo was taken at the Maui Nui Botanical Gardens in September. The Maui News / MATTHEW THAYER photo

A statewide breadfruit cooperative received more than $1.3 million in state and federal grant money to help bolster the organization, which includes grower and member Hana Ranch.

Hawaii ‘Ulu Cooperative was approved this summer for three grants that will support its Big Island-based infrastructure, which helps process ulu for Hana Ranch and other members, and grow the organization that welcomes ulu farmers from around the state.

Hailed as a buzzworthy superfood, breadfruit has been a traditional staple in Hawaii. The fast-growing, productive trees yield fruit that has a potatolike consistency, but packs higher quality protein and more vitamins and minerals than other starches, fruits and veggies.

“It’s a crop that’s growing in significance for a lot of reasons,” Hana Ranch Manager Duane Lammers said Thursday. “It’s got a lot of versatility . . . and a good flavor.”

Hana Ranch in East Maui started growing its first ulu on about 5.5 acres two years ago, he said.

Last year, the ranch became a Hawaii ‘Ulu Cooperative member when the orchards produced 6,000 pounds of fruit during the September to November season, more than its handful of local vendors could use. Lammers said it was helpful to be able to ship about 2,000 pounds of breadfruit to the co-op for processing.

“I think (HUC) is great,” he said, adding that he recently toured the Big Island facility. “One of the things missing in Hawaiian agriculture is processing. Any time you can get processing done in the islands, it’s important.”

This year, Lammers anticipates 10,000 pounds of production among its three ulu varieties. He said the ranch plans to expand its orchards to include more old Hawaiian trees.

Started in 2016, the co-op has helped cultivate a local commercial industry for ulu. Its roughly 2-acre, state-owned South Kona property serves as a site for ulu aggregation, processing and distribution around the Hawaiian Islands.

The co-op has nearly 100 members and works with community organizations, such as schools, hospitals and chefs, to revitalize ulu as a viable crop and dietary staple for the state, the organization said.

Shapiro said the grants will help ulu farmers on Maui and throughout the state.

“This sets an important precedent for other farmers on Maui and statewide that they can join the co-op if they have excess fruit they are not able to sell locally,” she said. “Our commitment to our members and to the community is that we provide a guaranteed market and price for ulu — in other words, we don’t turn our farmers away.”

She said that the co-op has seen an annual doubling of volume, making it pivotal to educate the public about ulu’s benefits and to develop new products and markets for the increasing production.

This holiday season, the co-op is launching a retail pack of frozen ulu for grocery stores statewide.

With state Capital Improvement Project and Grant in Aid money, as well as a U.S. Department of Agriculture Small Business Innovation Research grant, the co-op aims to produce 1 million pounds of ulu by 2025.

The $1.1 million CIP grant will provide funds for infrastructure improvements and maintenance of the co-op property. With the Grant In Aid (Big Island Resource Conservation & Development Council is the fiscal sponsor of the $150,000 grant), the co-op will purchase new equipment such as walk-in freezers for its minimally processed local produce to support continued rapid growth of the co-op.

The small business research funds of nearly $100,000 will support research and innovation into how the co-op can scale a farmer-owned co-op model for manufacturing ulu products to support Hawaii’s food security, as well as other local crops that could fit the model.

For information on Hawaii ‘Ulu Cooperative, go to eatbreadfruit.com.