Hundreds rally for water rights as case draws to close 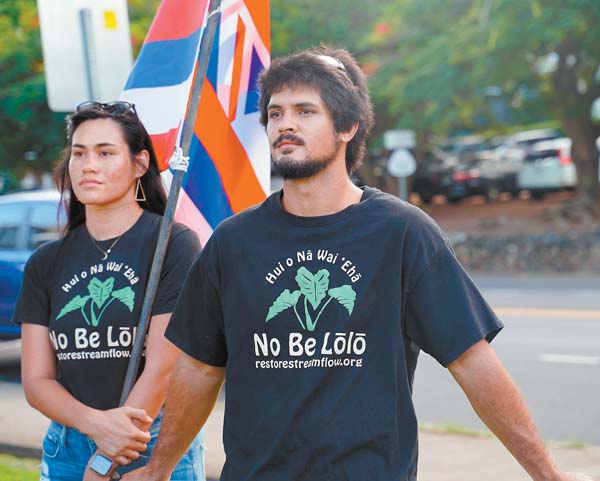 Victoria and Nick Harders of Waikapu participated in the Hui o Na Wai `Eha rally on Tuesday evening. The couple said they were not swayed by Mahi Pono’s alleged threats of potential development, and warnings of an increase in fire fuel if the land it purchased in December does not get more water. The Maui News / KEHAULANI CERIZO photos

WAILUKU — With chants of “aloha aina,” hundreds of people rallied Tuesday evening at the State Building to protest a possible Mahi Pono move that rally organizers say could derail one of Hawaii’s significant water rights cases.

Several speakers tied water rights to Native Hawaiian efforts atop Mauna Kea, where a demonstration against a proposed telescope and management of the sacred summit has been going on for months.

“What the Mauna has taught me is that we can . . . We can make a difference,” said speaker Kahele Dukelow.

“Mauna Awakea is shining the light on all the hewa (wrongs) going on,” said speaker Ke`eaumoku Kapu. 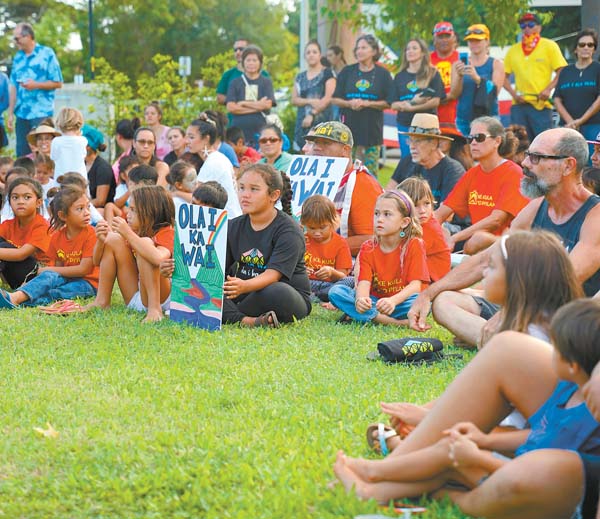 “Ola I Ka Wai,” water is life, signs are held at Hui o Na Wai ‘Eha’s rally Tuesday evening at the State Building. Hundreds participated in the rally that expressed opposition to Mahi Pono’s possible request to reopen the evidentiary portion of the Hui’s nearly two-decades-old case that is nearing a close.

Other speakers emphasized that water rights affect every member of the community in Hawaii.

“This is not just a Hawaiian issue; this is a community issue,” said Koa Hewahewa, Hui vice president.

“Ola i ka wai, no one is exempt from that,” said Lani Eckart-Dodd, Hui treasurer. “It doesn’t matter your ethnicity, your nationality. If you live on Maui, if you live in Na Wai `Eha, ola i ka wai affects you. ‘The water is life.’ We need our waterways restored.”

Hui officials said they planned the rally ahead of a state Commission on Water Resource Management meeting Nov. 19, when closing arguments are scheduled for the Hui’s nearly two decadeslong case to restore stream and river flows.

The “Four Great Waters” of Waihee River, Waiehu Stream, Wailuku River and Waikapu Stream had been long diverted for sugar cane operations that have ceased. But in 2003, the Hui asked the panel to amend in-stream flow standards to restore mauka-to-makai flows, which is key for river and ocean ecosystems, along with Native Hawaiian farming and cultural practices.

Mahi Pono, which was allowed in September to take the place of predecessor Hawaiian Commercial & Sugar Co. on a water-use permit application, said in August that it may request to reopen the evidentiary portion of the case. It’s a move that plaintiffs say would “derail” the long process that is nearing completion and be detrimental to both the community and streams.

“It would be chaos,” said Hokuao Pellegrino, Hui president. “First and foremost, it’s disrespectful to the process. I mean, people have died waiting for the water, our kupuna and other individuals in Na Wai `Eha.

“To derail all the hard work the community has done, there’s no justification for that.”

Eckart-Dodd said the case could go on and on and never get resolved.

Shan Tsutsui, Mahi Pono vice president of operations, issued a statement about an hour prior to Tuesday’s rally, explaining the company’s current stance on the case.

“There has been some misunderstanding in our community regarding the contested case hearing, and Mahi Pono would like to clarify our position,” he said. “It is not our intent at this time to reopen the contested case, our goal is to reach an agreement.

“As we work to transition former sugar cane land into diversified agriculture that will increase local food production and help to achieve food security, we are also fully committed to improving efficiency and implementing technology to better manage our irrigation systems.”

During a state Commission on Water Resource Management meeting in August, though, Mahi Pono attorney Benjamin Kudo told the panel that the company’s plan is different than HC&S’, and that the commission may want to hear Mahi Pono’s needs.

“That may necessitate reopening of the contested case evidentiary portion before you render a decision,” Kudo said.

Also, the Hui said it recently received communication from Mahi Pono that the company will be requesting that the water commission reopen the case.

“We are trying to negotiate in good faith, but they are being very aggressive,” said Albert Perez, executive director of Maui Tomorrow.

The contested case, which includes the Hui, Maui Tomorrow, Earthjustice and the Office of Hawaiian Affairs as plaintiffs, addresses stream and appurtenant rights of Native Hawaiian kuleana landowners and kalo farmers. This runs counter to the financial interests of private companies, such as Wailuku Water Co., Alexander & Baldwin and Mahi Pono, which aim to dominate use of water, a public trust resource, the Hui said.

The current battle to restore stream flows stretches back to 2003, when the Hui petitioned the commission to amend in-stream flow standards for Na Wai `Eha.

Since then, some stream flows have been restored through the contested case process, but the closure of HC&S in 2016 prompted the commission to revisit the in-stream flow standards. The latest phase of the contested case was coming to an end when Mahi Pono submitted its request to take HC&S’ place on the application.

Mahi Pono is seeking an undetermined amount of Na Wai ‘Eha surface water to irrigate 4,400 acres in the Waihee-Hopoi area.

After Mahi Pono purchased 41,000 acres of former HC&S cane fields in December, both companies filed a motion in May to remove HC&S’ name from the permit and replace it with Mahi Pono’s.

Of the 4,400 acres covered by the water-use application, Mahi Pono plans to cultivate 3,700 acres, including 800 acres of diversified agriculture and 2,900 acres of “tree orchard-type crops,” such as macadamia nut and lime, Kudo told the water commission during the August hearing.

However, despite the panel’s probing, specific water needs were not provided.

“For us, I think we’re somewhere in the middle of those two numbers, in the middle of 15 (million gallons a day) and 30-something,” Mahi Pono Operations Manager Grant Nakama told the commission.