‘I was arrested because I murked a demon’

Video interview of suspect played for jurors in murder trial 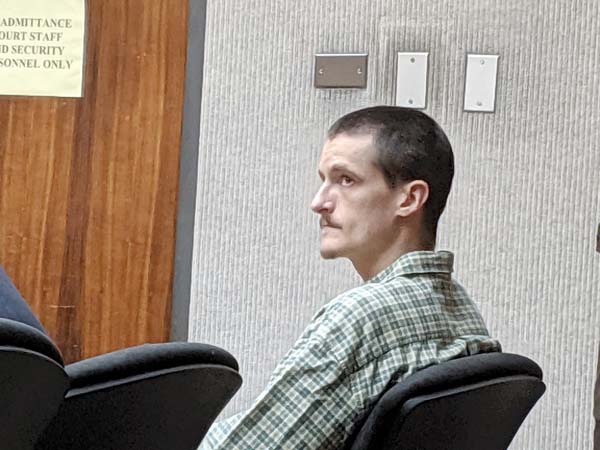 "And when you’re guided by the Holy Spirit, God, to do any actions now regardless of if it seems like, you know, a bad thing, when there’s a creature of darkness that wants to harm you and you have to stop that from happening, death . . ." — Murder suspect Kumulipo Sylva

WAILUKU — The day after he was arrested for killing a man in a shopping center bathroom, Kumulipo Sylva told police detectives he had “murked a demon” with a machete.

“I was arrested because I murked a demon,” Sylva said when he was questioned by detectives the day after the killing.

When Detective Oran Satterfield asked Sylva how he did it, he replied, “I cut his throat all the way down to the bone to make sure he wouldn’t live.

“It’s not life anyway,” Sylva said. “It’s force of evil which emanates in bodies, they do not have the light of God in them.”

The videotaped interview, conducted at the Wailuku Police Station, was played for jurors Wednesday in Sylva’s 2nd Circuit Court trial. 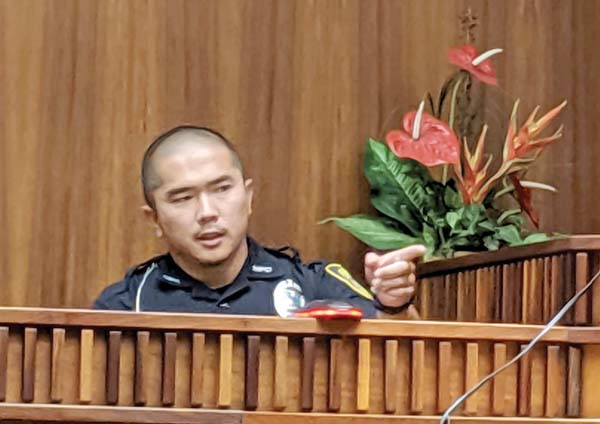 Police officer Chase Bell points out murder suspect Kumulipo Sylva while testifying in Sylva’s 2nd Circuit Court murder trial Wednesday. After Sylva was arrested, he made statements, including “thanks for not shooting me, demon,” Bell said. The Maui News / LILA FUJIMOTO photo

Sylva, 24, has pleaded not guilty to second-degree murder of Eduardo Alejandro Cerezo.

The 35-year-old Makawao resident died in the second-floor bathroom near the Macy’s men’s store at Queen Ka’ahumanu Center in Kahului on the afternoon of March 18, 2018.

Kyle Keoho, who was with Cerezo in the bathroom, testified Tuesday that they had been drinking shots of alcohol and talking when Sylva walked in with the machete and swung at Cerezo’s neck.

Earlier that afternoon, Sylva had been on the Maui Bus when Keoho and Cerezo got on at Pukalani Community Center, Keoho said. He said Sylva wanted to fight Cerezo once they got off the bus at the mall, but Cerezo said no.

In the interview with detectives, Sylva mentioned the Galactic Federation of Light, which he described as “light beings who are highly advanced, big brothers of humanity.”

He said federation members “have taken care of most of the demons.”

“Most of the demons got teleported to the moon recently,” Sylva said. “If you look at the moon with a telescope right now, you will see a pile of naked bodies all shriveled up.”

Sylva said Jesus Christ was “going to be showing up on Earth before too long.”

“All of the demons have to be removed before that can happen,” he said.

“Why would there be a need to remove every single one of those beings of evil? To protect human lives,” Sylva said. “So who am I? I’m just another one of those ones who are doing God’s will.”

“Were you doing God’s will at any time yesterday?” Satterfield asked.

“I do my best to listen to what God wants me to do,” Sylva said. “It’s taken me a long time to figure out . . . which things is actually the right thing and listening to God’s voice. Once you’ve actually heard it, you can’t ever mistake it again.

“And when you’re guided by the Holy Spirit, God, to do any actions now regardless of if it seems like, you know, a bad thing, when there’s a creature of darkness that wants to harm you and you have to stop that from happening, death . . .

Satterfield asked if Cerezo was a demon.

“That was one of them,” Sylva replied. “I can’t have any sympathy.”

“Did this demon do anything to you?” Satterfield asked.

“That one time,” Sylva said.

“What did he do?” Satterfield asked.

Later in the interview, Sylva said, “I felt that he ended my life in a past life or something. I have been trying to figure out what it was. But if there was any one of them that deserved to die, it was that one.”

Police said Sylva left the bathroom and the mall after killing Cerezo and ran up Wakea Avenue to Kahului Community Center Park.

Sylva told detectives he threw his camouflage jacket under a trash bin because it was heavy, then discarded the machete near the park tennis courts and threw leaves on it.

“I bought it thinking I was going to be using it for cutting cane grass and everything else,” Sylva said in the interview. “But I have been antagonized by demons that all want me dead, and I ended up staying on the streets in public where it was safe.”

Asked if there were other demons out there, Sylva mentioned “the first cop that run up on me.”

“He won’t be around for long,” Sylva said. “I asked the Galactic Federation of Light if they would please teleport him while he’s sleeping.”

Sylva also mentioned the man who was with Cerezo in the bathroom and another man that Cerezo had been talking with.

Sylva told the detectives he was taking two prescription pills to reduce the level of dopamine “to make my brain work right.”

Officer Chase Bell, who responded to the 3:13 p.m. call reporting the attack in the bathroom, testified he was canvassing the area for the suspect when another officer relayed that the suspect was running through the back part of Kahului Community Center Park.

Bell said he went to the park and began running toward the back when he was waved down by a man who pointed and said, “He’s over here.”

The officer followed the man to the southeast corner of the park near its fence line that borders Hale Mahaolu. Seeing people pointing at Sylva, Bell drew his police firearm and ordered Sylva to place his hands in the air and get down on his knees.

“He was sweating quite profusely,” Bell said. “He had noticeable sweat on his head, and his shirt was pretty much drenched.”

As the officer was putting handcuffs on Sylva, he said, “That was a demon, brah, chill,” Bell said.

He said he verbally advised Sylva of his constitutional rights before the defendant made two other statements.

Sylva said, “Hi, demon, I’m going to have to strip your powers from you,” Bell said.

“He also said something to the effect of ‘Thanks for not shooting me, demon,’ “ Bell said.

Testifying as a defense witness Wednesday afternoon, Sylva’s half-brother Siddhartha Walton said that Sylva “seemed to have temporary episodes of delusions” in June or July 2017.

“Things would trigger him and he would become very upset,” Walton said.

He said “the way people would look at him” was one trigger.

“There was a few times where I realized he was having conversations or I should say arguments with himself,” Walton said.

He said he cleared out his storage shed at his residence in Haiku so Sylva could live there in August and September 2017.

One day, Sylva destroyed a radio and chair in the shed, Walton said.

“He said the demons were crawling up out of the earth and it was his job to put them back,” Walton said. “Apparently smashing all my stuff was making them go back.”

In September and October 2017, Sylva didn’t appear to be getting much sleep, Walton said.

“He was afraid to go to sleep,” fearing that “demons would attack him while he was sleeping,” Walton said.

“He was trying to sleep in the daytime instead,” Walton said. “I think he would come out of his sleep already being attacked and was freaking out.”

Walton said he had to ask Sylva to leave. “He was causing fear in my wife and my children and my close neighbor,” Walton said.

About a week later, his wife invited Sylva to return after seeing him wandering around the mall with a trash bag of clothes, Walton said.

He said that lasted two days before Sylva didn’t show up for a job that Walton had gotten for his brother as part of a requirement of staying.

Judge Richard Bissen is presiding over the trial, which is scheduled to resume Monday.