County officials in talks with shopping center about 1-year extension 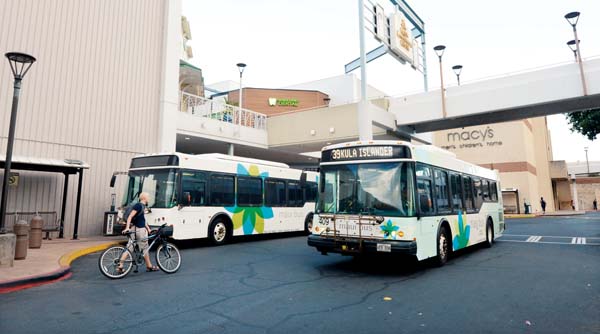 The Maui Bus Kahului Loop and Kula Islander make stops at Queen Ka‘ahumanu Center on Wednesday afternoon. The shopping center’s $1-a-year lease with the county for the bus hub ends in January and the replacement facility won’t be finished by then. The Maui News / MATTHEW THAYER photo

The new Maui Bus transit hub, which will replace the facility at the Queen Ka’ahumanu Center, will not be completed by the time its mall lease is up in January, and county lawyers and officials are working with the shopping center to extend the lease, a county spokesman said Tuesday.

The final environmental assessment and finding of no significant impact for the new transit hub were issued Tuesday, according to a notice in the state Office of Environmental Quality Control’s “The Environmental Notice.”

Brian Perry, county communications director, said Tuesday that the county is aiming to begin construction in late December to early January with construction expected to take at least a year. The environmental assessment said that the terminal still requires a special management area use permit from the Maui Planning Commission.

The county departments of Transportation and Corporation Counsel currently are working with the shopping center “to extend our lease until the completion of the transit hub,” Perry said. The extension required appears to be for about a year.

The mall notified the county in October 2017 that it would not be renewing the lease — for $1 a year — for the island’s busiest transit hub, located next to Longs Drugs. The lease expires Jan. 31.

The hub was opened on July 1, 2005, and shopping center officials have said that the Queen Ka’ahumanu Center wasn’t built to handle the growth in the numbers of passengers. There also have been violent crimes, including a machete murder last year, related to bus passengers.

Kumulipo Sylva is charged with murder for the death of Eduardo “Alex” Cerezo in the shopping center’s second-floor bathroom, which occurred after they both got off a bus. Sylva is scheduled to go on trial next week.

Ed Krampitz, general manager of the Queen Ka’ahumanu Center, said Wednesday there was no update from corporate officials on the bus hub. The shopping center is owned by The Seligman Group, which has offices in San Francisco and Southfield, Mich.

“Corporate is internally reviewing options and as of now has no comment to make,” he said. “Once an agreement is made between QKC and the county, we will have an update for you.”

The county identified a site near the mall terminal for the new bus hub to be able to maintain current routes. The 0.85 acre site, across Kane Street from the shopping center, was obtained in a swap with the state for the old Wailuku Post Office site, across the street from the county building.

The new terminal will include a ticket booth, restroom and storage building, roof structures to cover passenger-waiting and bus-loading areas and a parking lot. The project also includes the removal of bus infrastructure at the mall, including 11 existing bus shelters.

At the corner of Vevau and School streets, the new terminal is near the Kahului Public Library, the Waterfront Apartments and the 165-unit Kahului Lani senior rental project, set to open its 82-unit first phase early next year.

The cost is estimated at $3.5 million, the environmental report said. The state has put in $2.5 million for construction with the county adding $650,000 for design, according to previous reports.

The 2016 Maui Short Range Transit Plan called the Queen Ka’ahumanu Center hub “the heart of the current system.” Eight of the Maui Bus system’s 13 routes originate at the mall hub.

As far as construction on the site, the environmental assessment said that “it is unlikely that significant archaeological and cultural remains will be uncovered” based on the history and development around the site.

A traffic study for the environmental assessment says that the nearby intersections will operate at the same level of service with or without the project and that no traffic signals or left turn lanes are required. The report points out that the Kahului Lani project will be bringing Vevau, School and Kane streets up to county standards with Vevau Street dedicated to the county.