Only half of state driver’s licenses Real ID compliant 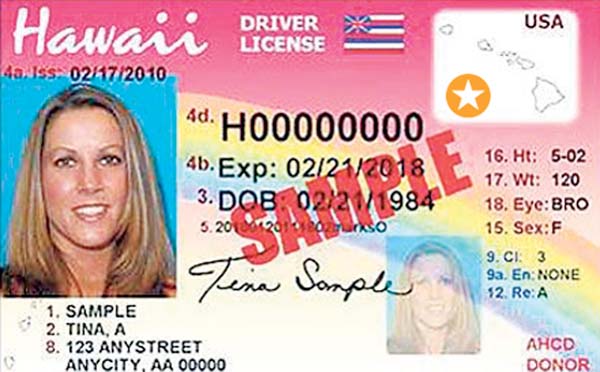 Only about half of the driver’s licenses and a quarter of state identification cards issued in Maui County have the “star in the gold circle,” indicating they are Real ID compliant and can be used as identification for air travel, a county spokesman said Wednesday.

While all Hawaii driver’s licenses and state IDs currently are acceptable as air travel identification, they will have to be Real ID compliant by Oct. 1, 2020, the state Department of Transportation said in a news release late last month. Every person traveling domestically on a commercial airline will need to present a Real ID compliant credential or another acceptable form of identification per the Real ID Act passed by Congress in 2005.

Only 61,442 of 126,976 active driver licenses are Real ID compliant in Maui County, said county spokesman Brian Perry. Only 7,571 state ID cards of 29,820 active cards in the county have the star in the gold circle.

Driver’s licenses generally may be renewed within six months prior to the expiration date. Licenses with an expiration of March 31, 2021, or later may be renewed before Sept. 30, 2020, to obtain the Real ID star, Perry said.

The cost to replace an active driver’s license is $12, renewals range from $10 to $80, depending on age and years of the license.

According to the Maui County website, the following are required for driver’s license renewals:

• Proof of date of birth.

• Application for renewal, available at any driver licensing office.

• Clearance letter from the Traffic Violations Bureau if the applicant has any outstanding citations.

The renewal process at the county Division of Motor Vehicles and Licensing averages between 20 to 30 minutes in addition to the waiting time. The number of customers waiting and the current wait times at the Kahului, Kihei and the Lahaina DMVL offices can be checked online at mauicounty.gov/2125/DMV-Wait-Times.

“We want people to know there is about a year remaining until the federal deadline to update your identification. While there is time, we don’t want people to wait until the last minute,” said state Transportation Director Jade Butay. “People should also be aware the driver’s license is not their only option. There are various other acceptable identifications that will work to allow you on a plane.”