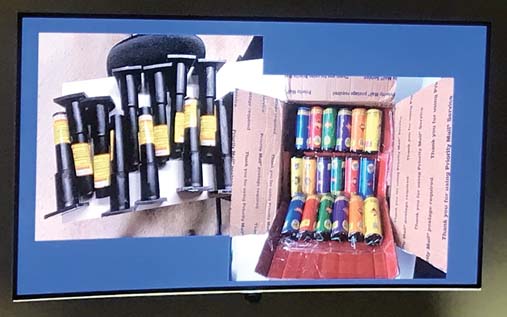 Maui police recently seized 107 pounds of aerial fireworks, 95 mortar shells and 40,610 firecrackers that were being shipped from the Mainland to Maui through the U.S. Postal Service. In the boxes shown in this Maui Police Department photo are black mortars used to shoot off aerial fireworks. Fireworks were also being mailed in boxes. The pictures were part of a slide presentation during a Maui Police Commission meeting Wednesday at the Wailuku Police Station. The Maui News / MELISSA TANJI photo

“We haven’t had a seizure like this in many years,” Assistant Police Chief John Jakubczak told the Maui Police Commission.

Wailuku Patrol Lt. Ken Doyle told commissioners that a man and woman, who are co-workers, were arrested in the case. According to police records, a 70-year-old Kahului woman was arrested on seven counts and a 43-year-old Kahului man on five counts of not having a license or permit for fireworks on Sept. 13. Both were released pending further investigation.

If the parcels had not been intercepted by police, the shipments likely would have continued, Doyle indicated. He said shipments of illegal fireworks likely will increase in November and December.

The Maui community has complained about a rise in illegal fireworks, including aerials and loud bomb-like devices. They are traditionally set off around the New Year’s and the Fourth of July holidays but have recently expanded beyond those days.

At a community meeting April 30, Maui Police Chief Tivoli Faaumu said he did not want to make any excuses about enforcement of fireworks violations but noted that police officers are busy on domestic cases arising from over-celebrating and highway safety during those holidays.

During the meeting in the Chief’s Conference Room at the Wailuku Police Station, Doyle detailed another fireworks case. Police executed search warrants at the Kahului Post Office on packages, which contained 118 mortar shells to be used to set off fireworks.

Post Office officials notified police Sept. 7 that there was a partially torn box with black plastic tubes visible. The shipping label indicated that the sender was a fireworks company in Wisconsin, Doyle said.

When questioned by police, the receiver of the package said he bought the items for flower- and/or candleholders for his wedding. Eventually, the man admitted that the mortars were for aerial fireworks for his wedding, he said.

Mortars are not illegal, so the man was not arrested, Doyle said. However, the items were confiscated.

In the other case, Doyle noted a history of packages being sent from Texas to a Kahului address dating back to December.

Several packages were suspected of containing fireworks in December at the Kahului Post Office, which sent them to its Honolulu office for handling. Post Office officials contacted those involved with the mailing and issued warnings, Doyle said.

Eventually, the investigation led to the 70-year-old woman, who was arrested at her workplace. Her initial comment to police was that she didn’t know why her niece sent the boxes.

Doyle showed commissioners photos of the boxes and their contents, which included Trader Joe items and clothes, as well as fireworks and mortars.

Later after reviewing the search warrants and items recovered, the woman said: “All I want is my Trader Joe cookies that I got while visiting Texas.”

Her alleged accomplice was arrested at his home, Doyle said. He told police that the woman asked if she could have boxes shipped to his address. The woman never told him what was in the boxes.

The man thought it was odd but said he has been working with the woman for almost 20 years. He didn’t think she would be sending illegal “stuff,” Doyle’s presentation to commissioners noted.

Fireworks generally are priority mailed for quicker delivery, and postal carriers are directed to leave boxes at the residence if no one is home, Doyle said.

Jakubczak said police are working with other post offices on similar cases. “We are addressing this the best that we can,” he said.

Jakubczak commended officer Kawika Ornellas, who has led the investigation of the fireworks case along with Doyle. Commissioner Bobbie Patnode recommended that letters of commendation be sent to those involved in the investigation.