Wailuku defendant agreed, ‘I made some mistakes’ 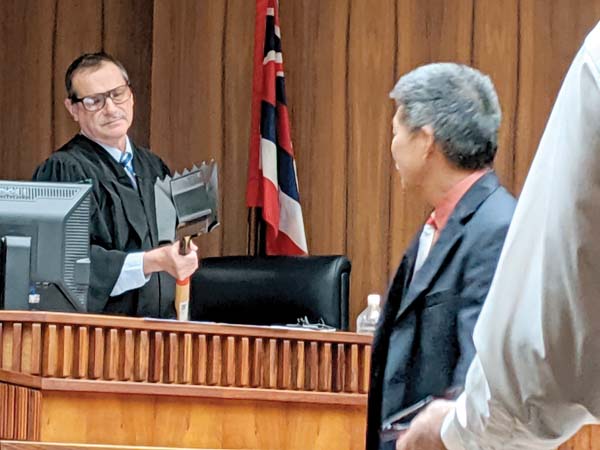 Second Circuit Judge Peter Cahill holds a shovel similar to one that victim Christopher Kunzelman said was used to hit him on the back of his head during an attack at his house in Kahakuloa Village in 2014. The Maui News / LILA FUJIMOTO photos

WAILUKU — A second defendant was placed on four years’ probation Thursday after being convicted of assaulting a man who reported being beaten with a shovel and terrorized in his house in Kahakuloa Village.

Kaulana Alo Kaonohi, 29, of Wailuku apologized to homeowner Christopher Kunzelman. He said he had been planning to spend his first night in the house he was renovating when he was attacked Feb. 13, 2014.

Back then, “I had a different mentality about things,” Alo Kaonohi said in court. “I made some mistakes.”

“Would you agree they were more than mistakes?” 2nd Circuit Judge Peter Cahill asked.

“Yes,” Alo Kaonohi said. “I have grown over these past five years.” 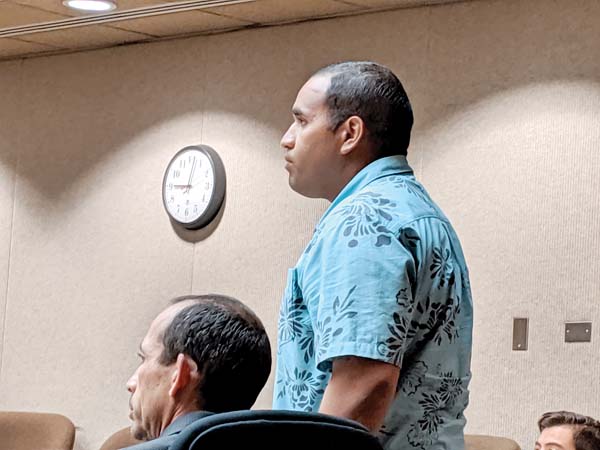 “That was a huge life-changing event for him,” Nardi said. “That’s his focus in life right now. I’m confident that nothing like this, no attack, no physical altercation, is ever going to happen with him again because his priorities are set in stone.”

“He wants to be a good father, a hard worker and a valuable member of our society,” Nardi said.

“My main concern is justice,” said Kunzelman, who traveled from the Mainland for the sentencing hearing. “Justice in this case is not probation.”

Kunzelman said he wanted the judge to hold a roofing shovel like the one that Kunzelman said had been used to hit him on the back of his head that night.

“I was physically attacked using what I consider a deadly weapon,” Kunzelman said.

He said Alo Kaonohi and co-defendant Levi “Pio” Aki Jr. had approached the property from the rocky beach. Kunzelman reported that they said, “It’s nothing personal, you just have the wrong f—ing color skin.”

Kunzelman reported being knocked unconscious and kicked repeatedly before he and his uncle fled.

In court Thursday, Kunzelman referred to another stranger who was attacked by Alo Kaonohi in a bar on July 20, 2014.

Judge Cahill said he wasn’t considering that case in sentencing Alo Kaonohi, although he was familiar with the facts from a civil proceeding in his court.

For the bar assault, Alo Kaonohi was sentenced last year to a one-year jail term as part of four years’ probation after he had pleaded no contest to second-degree assault. He was later granted a recessed sentence allowing him to leave the jail to go to work, according to court records.

“I paid the price for my actions in my other cases,” Alo Kaonohi said. “I’m just trying to get past all this and move on with my life.”

Judge Cahill said the plea agreement in the Kahakuloa case was reached as “this case was on the verge of being dismissed.”

Alo Kaonohi was ordered to complete anger management classes as part of his probation.

“I appreciate the respect you’ve shown to me,” Kunzelman said to the judge at the end of the sentencing hearing. “I’m absolutely not happy with the result. I feel like the only person in the United States of America who cannot go back to his own home because of the color of his skin. And that’s disappointing.”

A restitution hearing for Alo Kaonohi and Aki is set for Jan. 23.

Last month, Aki was sentenced to four years’ probation and was given credit for more than six months he had spent in jail. He had pleaded no contest to first-degree terroristic threatening.