Reservation system in works for access to Haleakala Trail

It would allow for quarterly guided hikes 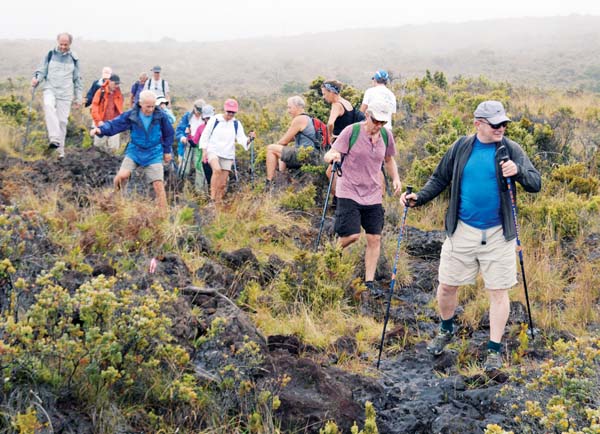 Braving rain and rugged terrain in October 2015, a group of 15 hikers led by the Sierra Club Maui hiked a section of the old Haleakala Trail that had been closed to the public for decades. The Maui News / EILEEN CHAO photo

The state is working with the Sierra Club Maui Group and Haleakala Ranch to create an online reservation system for guided hikes of Haleakala Trail, to which a Maui nonprofit fought for years to gain public access.

The system would allow for scheduled hikes of up to 20 people on the first Saturday of each quarter, led by trained, certified guides from the Sierra Club and the ranch.

On Friday, the state Board of Land and Natural Resources will consider the proposal during a meeting in Honolulu.

Haleakala Trail runs from the top of Olinda Road to the boundary of Haleakala National Park and was the main access to the summit before Haleakala Highway, or Crater Road, was completed in 1935. A 3.3-mile section of the trail crosses through lands owned by Haleakala Ranch.

Haleakala Ranch had long laid claim to the trail and said that public use of the trail would create safety concerns. But others believed the trail belonged to the state and should be open to unregulated public access. So, the state and the ranch drew up an agreement that provided for guided hikes using a reservation system.

In January 2011, Public Access Trails Hawaii and three individuals filed a class-action lawsuit challenging Haleakala Ranch’s claims of ownership. They argued that the historic trail existed before the Great Mahele land division of 1848 and is therefore a public highway under the Highways Act of 1892.

A jury trial was held, and in April 2014, the jury sided with the plaintiffs and the state. The parties reached a settlement, and Haleakala Ranch agreed not to appeal. Second Circuit Judge Joe Cardoza signed an order in July 2016 that officially brought the legal battle to an end.

With the trail now in state hands, Haleakala Ranch asked to toss out the old reservation system agreement, and the Board of Land and Natural Resources agreed.

Now, the Division of Forestry and Wildlife is looking to put together another agreement that will continue to allow for public access but also address concerns over safety and ranch operations.

Many of Haleakala Ranch’s concerns remain the same — that unguided public use of the trail could impact ranching operations, create public safety risks and expose the ranch to liability. The trail is not marked or maintained, making it difficult for most people to follow without a guide, and because the route identified in court documents is not necessarily the most practical, it opens up the possibility that hikers may stray onto ranch property.

Parking also is limited at the top and bottom of the trail, and both locations present safety issues and capacity concerns.

The proposed agreement for a reservation system follows an existing platform that the Sierra Club uses for its own guided hikes. It would limit hikes to pedestrians only — no bikes, skateboards, motorcycles, other vehicles, horses, pets or other animals allowed, except for service animals.

Under the agreement, Sierra Club would maintain the online reservation system and schedule a hike on the first Saturday of each quarter, “or as soon after as practicable in the case that a hike must be canceled for safety or other unanticipated reasons.” The club also could schedule hikes on additional days if requested and agreed to by the other parties.

The ranch would provide information, guidance, routing and direction to ensure public safety and allow participants to enter ranch land adjacent to the trail if warranted.

Both the ranch and Sierra Club must designate a representative to serve as a certified guide to lead two of the annual quarterly hikes.

Meanwhile, the state Department of Land and Natural Resources would be tasked with limiting public use of the trail to the visiting provided by the guided hikes. It also would offer technical assistance, interpretive materials, signage and any other information or guidance required.

The ranch had previously asked the Division of Forestry and Wildlife to close the trail during times when guided hikes are not scheduled. However, the division believes the creation of a reservation system and guided hikes would help “alleviate the impacts from inappropriate public use of the trail.”

“We would prefer to enforce closure of the trail only if a need to do so is demonstrated to exist after implementation of the guided hike program,” the division said in its request to the board.

The board will look into the guided hike reservation system during its meeting at 9:15 a.m. Friday in the Land Board Conference Room of the Kalanimoku Building at 1151 Punchbowl St. in Honolulu.

Public testimony can be emailed to blnr.testimony@hawaii.gov and must be received no later than 24 hours before the board meeting.

Individuals who plan to attend the meeting and need special assistance or auxiliary aids or services — such as a sign language interpreter or wheelchair accessibility — should contact staff at least 72 hours before the meeting at (808) 587-0404.

To review the meeting agendas and documents, visit dlnr.hawaii.gov/meetings/. Materials are also available in person at 1151 Punchbowl St., Room 131.