Study: Maui, Molokai coastal roads among those most vulnerable 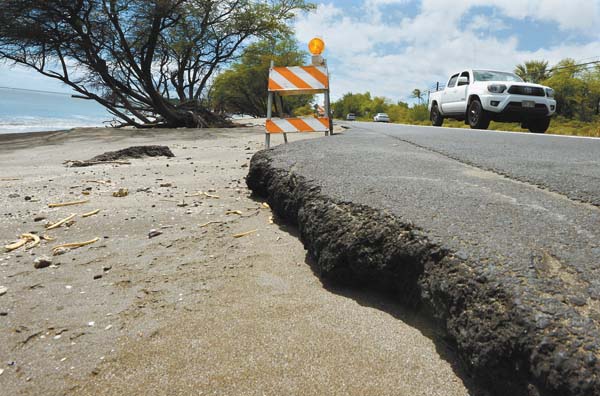 Traffic barricades warn motorists of a steep drop-off on an Olowalu stretch of Honoapiilani Highway in this photo taken Sept. 4. A recent study prepared for the state Department of Transportation by University of Hawaii-Manoa researchers has ranked the roadway in this area as among the most susceptible to coastal erosion and road degradation in Hawaii. The Maui News / MATTHEW THAYER photos

Of the top 20 state coastal highways susceptible to erosion and structural degradation, Maui County has 10 — five each on Maui and Molokai — according to a recent report by researchers at the University of Hawaii at Manoa.

The report prepared for the state Department of Transportation assesses and ranks the susceptibility of state coastal roads to ocean hazards, such as waves, currents, tides and sea-level rise, according to the report’s executive summary.

State Transportation Department Deputy Director for Highways Ed Sniffen said the primary purpose of the study was to establish criteria for the prioritization of sections of highways needing protection from coastal erosion.

The modeling and analysis assist the department with a strategy to maintain connectivity of current roadways, he added.

The report recommended actions, such as relocating, elevating or hardening, which will be analyzed then presented to the community, said Transportation Department spokeswoman Shelly Kunishige. The anticipated timeline for the department analysis will be approximately two years, she added. 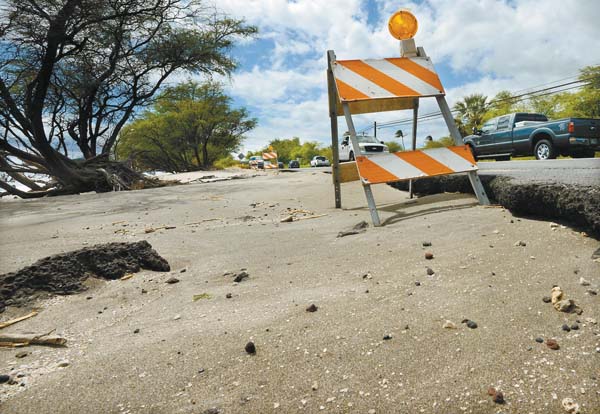 State Sen. Roz Baker said that she drives Honoapiilani Highway between her home in West Maui and Central Maui and often encounters the ocean washing onto the road. She is concerned that the foundation of the highway is being damaged.

Kunishige said the Transportation Department currently is looking into temporary armoring at the Mopua site, a small realignment in the existing highway right-of-way or use of precast concrete blocks to mitigate the ocean splash onto the highway.

The Mopua site, near Milepost 14, had the highest Coastal Road Erosion Susceptibility Index rating (44) among all of the 20 ranked highways statewide.

Kunishige said the scale values are from 0 to 100, with 100 having the highest risk. A higher erosion value means the segment is more likely to be affected by sea-level rise and/or coastal erosion. The rating considers shoreline erosion rate, average tidal change, wave heights and surrounding land uses, including beach and coastal development.

Sea levels in Hawaii have risen 0.6 inch per decade over the past century, according to the UH School of Ocean and Earth Science and Technology website.

It may not seem like much, but sea-level rise exacerbates hazards such chronic coastal erosion, seasonal high waves, coastal inundation due to storm surges and tsunamis and drainage problems from the convergence of high tide and rainfall runoff, the website said.

Sea levels are expected to rise by more than 3 feet by the next century.

Two portions of highway on Molokai, one in Kalua’aha and the other in Puko’o, are the next Maui County sites on the list, ranked sixth and seventh, respectively. Remediation recommended for both roadways are relocation or elevation increase.

Sniffen said it could cost $15 billion to protect the state areas on the list. This figure includes not abandoning the road and potential property acquisition; it does not take into account county roads or bridges.

The Maui County sites on the report:

• No. 15, near Kealia Pond boardwalk along North Kihei Road.

• No. 19, Lahaina, past Launiupoko near the entrance to Lahaina town.

Maui County state Rep. Troy Hashimoto, who is vice chairman of the House Transportation Committee, acknowledged the need to understand the impacts of coastal erosion on roadways and for planning.

The biggest constraint to acting on the problem areas is finding the money, he added.

The primary source of funding for highway projects is the fuel tax, but as vehicles become more fuel efficient and new technologies, such as electric vehicles that do not use gasoline, are becoming more prevalent, there is less money generated, he said.

Finding a new source to make up for the lost tax money is a difficult task for the Legislature, he said. One solution, though, was to pass a $5 daily surcharge on rental cars to assist with roadway capacity projects that took effect July 1.

Maui County state Sen. Roz Baker, who lives in Lahaina, said she will be seeking more funding, possibly by increasing the rental car surcharge, for these types of road projects.

“We know Maui has all of these needs,” she said. “We also know that funding is not going to be infinite, it’s finite.”

Baker sees the need to improve stretches of Honoapiilani Highway, the main thoroughfare between West and Central Maui.

“There are so many stretches of Honoapiilani Highway that need to be moved back, that’s supposed to be high on DOT’s list,” she said. “So many of those areas are vulnerable.

“This is the only way we have to get to the other side.”

Driving regularly between Central and West Maui Maui, Baker said she sees the ocean going over the road and figures the foundation of the roadway is wearing away.

“I keep trying to impress upon DOT, I want the bypass going north (toward Kaanapali), but we got to take care of what is going south, too,” she said. “That to me is the most vulnerable area.”

A past citizens group looking at the southern portion of the Lahaina bypass that would connect with the pali urged pushing a portion of Honoapiilani Highway inland, she said.

Kunishige said a mauka realignment of Honoapiilani Highway from the pali to Puamana has been identified as a potential project, and the Transportation Department currently is procuring a consultant for preparation of environmental documents on the potential realignment.

The current plan for use of the rental car surcharge funds is to move forward with the phase of the bypass from its current end at Keawe Street in Lahaina to beyond Puukolii Road in Kaanapali, Kunishige said.