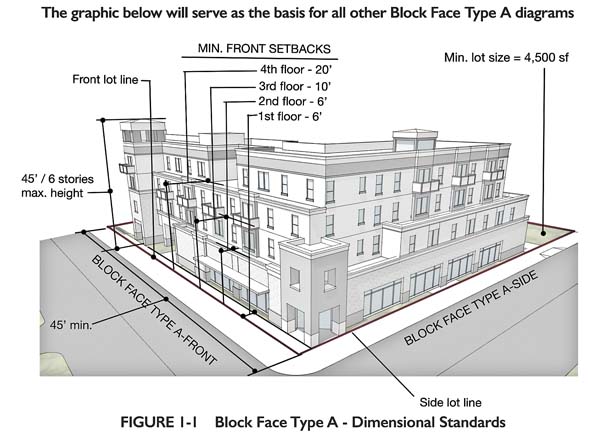 The Maui Redevelopment Agency, which has the power to alter zoning and development rules for downtown Wailuku, will continue to mull whether to hike height limits from four to six stories along certain streets during its Friday meeting, though decision-making likely won’t come until next year, an official said.

History of the Wailuku Redevelopment Area zoning, development code and design guidelines, along with the current status of amendments and options for updates, are slated for presentation Friday at 1 p.m. in the county Planning Department conference room in Wailuku, according to the agenda.

Maui Redevelopment Agency documents show three types of block faces in the commercial mixed-use district. The “Type A Block Face” would have the most drastic changes, with limits increasing from four to six stories along parts of Main and Church streets.

The changes, though, wouldn’t apply to the entire redevelopment area, Wade said Wednesday, adding that it would pertain to parts where six-story buildings already exist.

The agency’s 22-page draft for area zoning and development rules also shows a “height bonus” — not to exceed eight stories or 106 feet, whichever is less — for zoning lots larger than 8,500 square feet that provide “landscaped courtyards or open space that is open to the sky.”

“The goal is to provide ground-level open space for landscaping or courtyards that is connected to public space,” Wade said.

However, the panel on Friday may just have “housekeeping updates to the ordinance and save the consideration of additional height limit discussions until a later time,” Wade said.

The five-person panel, led by Chairman Frank De Rego Jr., holds authority to make changes to code for the Wailuku Redevelopment Area, which covers about 68 acres in the town’s core. It includes blocks from Central Avenue to High Street and Wells to Vineyard streets, along with the length of Market, from Wells through Happy Valley to the start of Kahekili Highway, according to the county website.

For the agency to take action, 30 days’ notice must be published in the newspaper, Wade said. For additional height discussions, she added, the agency intends to also send out direct mailers informing people of possible action.

From there, voting, along with the mayor’s signature, is all that’s required for approval.

Wade said height changes have been mulled by the agency for nearly two years, and action is unlikely this year.

“I think we’re a long ways a way from having a final draft from this ordinance,” she said. “Even if we wanted to rush it, the soonest we could do it is January.”

A six-story, 156-room Hilton Garden Inn, billed as a “kamaaina business hotel” for locals visiting Central Maui, is in the early stages of proposal for about 58,648 square feet near the corner of Market and Main streets.

The current area zoning allows four stories. When the land was purchased about 20 years ago, the limit was 12 stories, according to landowners Jonathan Starr and Helen Nielsen, who are proposing the hotel.

They said last week that six stories is necessary for the hotel, and the town, to be successful.

“For this to economically work we need to go six stories,” Starr told The Maui News. “We also believe strongly that that kind of density is what’s needed in the core of the town. It will put more people on the street, there will be enough activity for restaurants, cafe, theaters, which is what the town needs to survive.”

Starr added that the project is not reliant on Maui Redevelopment Agency rezoning, as he may apply for a variance. He also pointed to area buildings, such as Maui Realty Suites, that are “already that tall or taller.”

The agency is under the county’s panels and commissions. For more information on its draft rules and meeting, visit www.mauicounty.gov/192/Maui-Redevelopment-Agency.

Two of the products that have been recalled by Mann Packing Co. are pictured. The state Department of Health is warning residents of a voluntary recall of Mann Packing Co. vegetable products that may have been contaminated by bacteria. Some of the products shipped to Hawaii are listed under the Mann brand; others are packaged under Signature Farms. Photos courtesy state Department of Health

MANN’S POWER BLEND – One of the recalled products

Nawai Kaupe batted 3-for-8 with four runs and one RBI, on a towering home run, during the Rainbow Wahine’s Fall Preseason Classic last weekend.

An art piece by Paul Rockwood depicting the demigod Maui snaring the sun will be among the works displayed at Haleakala National Park’s Headquarters Visitor Center during a special exhibit. National Park Service photo

Kealiiwahamana Neula sits with Deputy Public Defender Tyler Stevenson at a preliminary hearing Wednesday afternoon in Wailuku District Court. Neula was ordered released after a judge found there wasn’t enough evidence to support probable cause for two counts of first-degree arson in connection with a fire last week at a Wailuku house. The Maui News / LILA FUJIMOTO photo