Coral bleached on Maui, but not as much as previous years 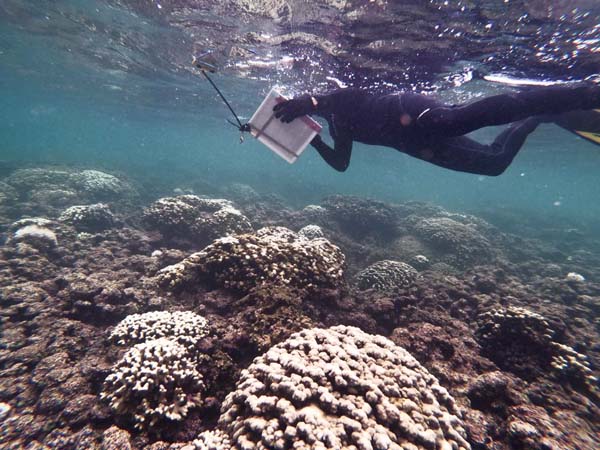 Researchers conduct a coral bleaching survey in Kaneohe Bay on Oct. 23. The state Department of Land and Natural Resources reported Tuesday that bleaching of corals in Hawaii’s waters was not as severe as predicted but still widespread. On Maui, bleaching surveys showed that the amount of coral impacted was less than in 2014 and 2015, when major bleaching events occurred. DEPARTMENT OF LAND AND NATURAL RESOURCES photo

With ocean temperatures decreasing after a warm summer and fall, coral bleaching surveys of Maui reefs showed a lesser impact this year than in 2014 and 2015, the state Department of Land and Natural Resources said Tuesday.

However, areas with low coral from previous events were more severely impacted this year. For example, the nearshore reef at Paia, where live coral cover is only 5 percent, more than three-quarters of the live coral left there bleached, the DLNR Division of Aquatic Resources said.

There was severe coral bleaching in Hana, Kapalua, Kaanapali, Olowalu and spots in north and south Kihei and on Kahoolawe, according to the “Hawai’i Coral Bleaching Tracker.” The tracker is presented by the Arizona State University Center for Global Discovery and Conservation Science. Most of the readings were taken last month.

“Conditions for corals are now improving with sea surface temperatures beginning to drop,” according to Gerry Davis with National Oceanic and Atmospheric Administration Marine Fisheries. “While bleaching this year was not as devastating as the events seen across the Hawaiian Islands in 2014 and 2015, the DAR surveys, along with NOAA observations and reports from ocean users to the Hawai’i Coral Bleaching Tracker, show there still was substantial bleaching found on all islands.”

As much as half of live coral bleached in the most heavily affected areas, Davis said.

For the past two months, teams from the Division of Aquatic Resources, NOAA, The Nature Conservancy, the Hawai’i Institute of Marine Biology and the Arizona State University Center for Global Discovery and Conservation Science conducted rapid assessments of coral health along coral reef tracts throughout the state.

“We hope that greater awareness of the constant stresses we all put on our coral reefs and the steps we can take to reduce those impacts helped the corals persist during this event,” said DLNR Chairwoman Suzanne Case.

She made a pitch for the DLNR’s The Coral Pledge, encouraging commercial tour operators to sign the pledge.

“The steps outlined in the pledge are the best way for everyone to do their part — simple steps, to save corals,” she said.

The Coral Pledge highlights six actions: Let fish protect reefs, corals like their space, stand on the sand, use reef-safe sunscreen, contain any chemical and anchor away from reefs.

Many companies and their customers spend a lot of time in the ocean and many are not aware of the simple things that can be done to save coral, DLNR said.

Brian Neilson, Division of Aquatic Resources administrator, said the vision is for pledge signees to share this information with their guests before they head into the water to swim, snorkel, surf and kayak. Twelve prominent tour and hospitality companies and other organizations are founding signatories of the pledge.

He said it’s easy to sign up. The Division of Aquatic Resources will provide 3-by-5-inch pledge cards that operators can read to customers.

While the pledge is focused on the visitor industry, it’s hoped that local residents also will become familiar with the six points, DLNR said.