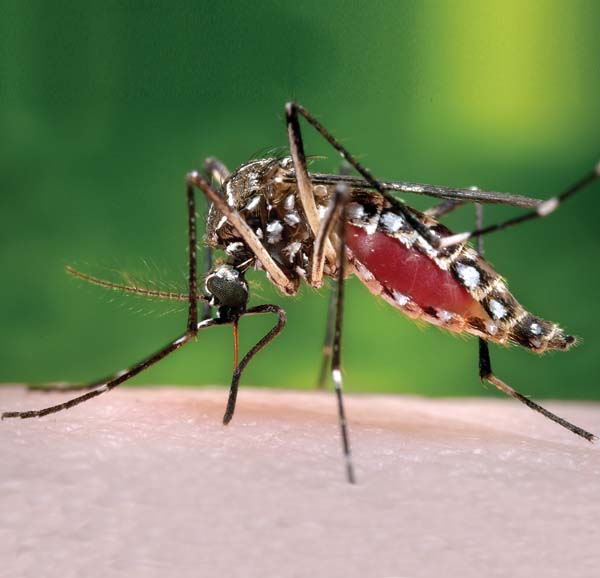 A female Aedes aegypti mosquito draws blood from an arm. The state Department of Health suspects a mosquito-borne illness in a Kahului resident who recently traveled abroad, though tests are pending. Centers for Disease Control and Prevention / JAMES GATBANY photo via AP

The state Department of Health recently gave out around 80 letters to residents in a Kahului neighborhood after the department was notified late last week of a suspected case of a mosquito-borne illness some 200 yards from those residences.

DOH spokeswoman Janice Okubo said via email Wednesday that the case involves a resident who recently traveled internationally, and that testing is pending at DOH’s Laboratory Division.

She expected results in the “next couple of days.”

Okubo said the letters are part of Maui Department of Health Office protocol and preventative action, and that the measures occur sporadically throughout the year. Residents in a Maui Lani neighborhood reported receiving notices, but Okubo said the department would not provide the exact streets, as she believed it is to protect the identity of the patient.

The notice, dated Nov. 8, says that the suspected mosquito-borne illness could involve dengue, Chikungunya or Zika. The suspected illness was acquired outside of Maui.

The notice asks residents to eliminate standing water around their homes and avoid getting bit by mosquitoes.

Okubo could not provide specific details until the department knows which virus may have infected a resident.

In 2018, Maui had two imported cases of dengue fever related to travel.

Okubo said it has always been a health department protocol to conduct mosquito inspection and control as needed in at least a 200-yard radius whenever the department identifies someone who has compatible symptoms and has traveled to areas where mosquito-borne diseases are endemic.

This type of protocol has remained in place because Hawaii is always at risk for introduction of a mosquito-borne disease, since the islands have mosquitoes, namely Aedes albopictus on Maui, which can transmit various viruses, Okubo said.

In addition to the protocol, the department always advises persons who are ill to remain indoors and away from mosquitoes until they have recovered; in nearly all cases, they comply because they generally don’t feel well, she added.

The notice also came along with information about mosquitoes and how to control them around the home, as well as virus information.

Zika symptoms are often mild, and death from Zika infection is very rare. If symptoms show, they will usually last for several days to a week and may include rash, joint pain and red eyes (conjunctivitis), along with muscle pain and headaches.

Pregnant women, however, should be aware that a Zika virus infection during pregnancy can cause microcephaly, a serious birth defect that causes a baby’s head to be smaller than normal.

Dengue fever symptoms may include sudden fever, severe headaches and rash, along with eye, joint and muscle pain. Symptoms can appear two to 15 days after being bitten by an infected mosquito.

Chikungunya symptoms may include fever and joint pain; other symptoms that are less common but could occur are headaches, muscle pain, joint swelling and rash. The majority of cases recover in seven to 10 days, but some may have ongoing joint pain for months.

Symptoms can be severe, but death from chikungunya is uncommon.

The letter given to residents says that if anyone has questions or symptoms from one of the diseases, they should call the Maui district office at 984-8213 or to visit their primary care physician.

A female Aedes aegypti mosquito draws blood from an arm. The state Department of Health suspects a mosquito-borne illness in a Kahului resident who recently traveled abroad, though tests are pending. Centers for Disease Control and Prevention / JAMES GATBANY photo via AP