Judge does not find probable cause for attempted murder charge 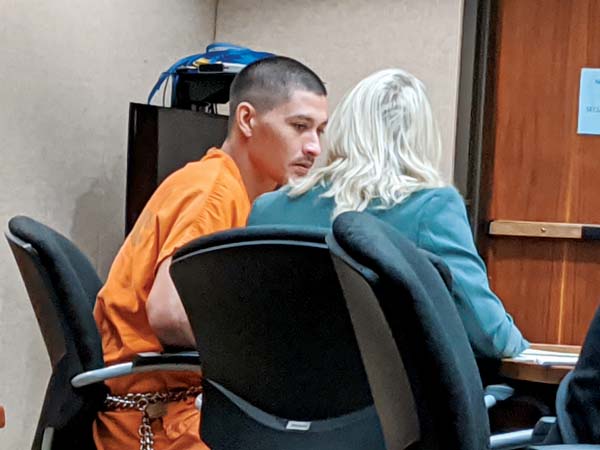 Troy Borge Jr. talks with Deputy Public Defender Danielle Sears on Thursday afternoon in Wailuku District Court. Borge was being held in lieu of $100,000 bail on a charge of first-degree assault in the beating of a man last week at Paia Bay. The Maui News/LILA FUJIMOTO photo

WAILUKU — A man arrested for allegedly hitting another man in the head with a stick or club near Paia Bay last week was charged with first-degree assault Thursday, after a judge ruled there wasn’t enough evidence to support the original charge of attempted murder.

“The court just doesn’t feel it has enough evidence to establish probable cause for the crime of attempted murder, just based on the testimony of the witness that we have had so far,” Wailuku District Judge Kirstin Hamman said after evidence was presented at a preliminary hearing Thursday.

She did find probable cause to support the assault charge.

Wailuku patrol officers were assigned at about 10:30 p.m. Nov. 5 to investigate the assault near the Paia Youth & Cultural Center. Police said the victim suffered life-threatening injuries after being struck several times in the head with a blunt object. He was transported to Maui Memorial Medical Center in critical condition, police said.

Testifying at Thursday’s preliminary hearing was Chanelle Kapuni, the girlfriend of the 25-year-old victim, Briar Lee Brossart, who is also known as Rabbit.

Kapuni said she and Brossart were sleeping on a blanket on the grass in front of the youth center the night of Nov. 5 when she was awakened by “the sound of Rabbit getting struck” at least two or three times.

“It was a thumping sound,” she said.

Brossart was 5 or 6 feet from the blanket in the direction closer to Paia town, Kapuni said.

“I saw Rabbit face down and Troy whacking him from behind,” she said.

She said Borge was holding a wooden stick or club and was standing above Brossart. The weapon was about 2 feet long with a “softball-size” width, Kapuni said.

She said she saw Borge hit Brossart two more times on the back of his head.

“I immediately got up and ran over there and I started yelling and shoved him off of Rabbit,” Kapuni said. “Troy just looked surprised. I think he lost his balance or something. He looked around and he took off.”

When she checked on Brossart, “there was blood everywhere,” Kapuni said.

She said medics and an ambulance arrived and took him to Maui Memorial Medical Center, where he underwent surgery upon arrival and was unconscious in the intensive-care unit.

Under cross-examination by Deputy Public Defender Danielle Sears, Kapuni said she didn’t see the beginning of what happened that night.

When Sears asked if the stick was driftwood, Kapuni said, “I’m not 100 percent sure, but it could have been.”

Sears argued there wasn’t enough evidence to show “there was an intent to commit murder” by Borge.

“He did run away,” Sears said. “There was no indication of why this happened, what caused this incident.”

Deputy Prosecutor Mike Kagami said that based on Kapuni’s testimony, “We have at least four hits, at least two to the head of the victim who’s lying prone.”

Kagami argued that provided probable cause for the attempted murder charge.

Borge is scheduled to be arraigned Nov. 27 in 2nd Circuit Court.