Airline to cover route without any subsidy

Under the two-year contract, Makani Kai will provide twice-daily service between Kahului and Hana.

“Just as we have on Molokai, on Maui and the Big Island, we intend to serve the residents first,” Makani Kai President Richard Schuman said in a news release. “We will fly when the locals want us to fly and offer them the same flat-rate airfare that has made us a success elsewhere.”

Schuman said the airfare is $55.50 one way “for every seat, on every flight, every day.”

The federal Essential Air Service program is aimed at providing service to rural or hard-to-reach communities around the U.S. The Department of Transportation awards contracts — and sometimes subsidies if needed — to airlines to service these areas.

Mokulele Airlines previously held the contract for Hana. In August 2017, the company decided it could no longer provide unsubsidized service to the town and sought funding from the federal government under the EAS program. Mokulele later landed a contract to provide 14 nonstop round trips per week from Hana to Kahului with an annual subsidy of $114,099. The contract was good from Nov. 21, 2017, to Nov. 30, 2019.

Earlier this year, both Mokulele and Makani Kai applied for the new Hana contract.

The twice-daily flights would depart Kahului at 7:35 a.m. and 5:15 p.m., and Hana at 8:25 a.m. and 6 p.m. The airline also offered one-stop connections from Hana at Kahului to all the other airports Mokulele serves around Hawaii.

Makani Kai, meanwhile, proposed to offer service without a subsidy. The company proposed 12 weekly round trips (twice a day, six days a week) between Kahului and Hana, with flights departing Kahului at 7:20 a.m. and 2 p.m., and Hana at 8 a.m. and 2:40 p.m.

Makani Kai had also originally proposed one daily nonstop flight between Honolulu and Hana but nixed those plans because of the cost and because the department didn’t need it, said P.J. O’Reilley, director of sales and marketing for Makani Kai.

Eventually, Makani Kai’s proposal won out. Scott Faulk of the U.S. Department of Transportation explained in a July 10 letter that when a company offers to provide Essential Air Service without a subsidy, the department “typically will not proceed with the airline-selection case” and “will simply rely on that airline’s subsidy-free service as proposed.”

Mokulele benefited from that practice last year when it proposed unsubsidized EAS service to Kalaupapa and was chosen over Makani Kai, which had asked for a subsidy.

As it starts service to Hana, Makani Kai will also be partnering with Hana Air & Ground Tours, a new company founded by Hana native Kai Funes Smith, to offer 15-minute scenic flights in and out of Hana as part of the company’s tour package. O’Reilley said that he thought Makani Kai could generate more traffic than Mokulele and that partnering with the tour company would help Makani Kai operate without federal funding.

“We feel that that (partnership) and just the normal traffic to and from Kahului should be enough for us to make a profit on that route without a subsidy,” he said. 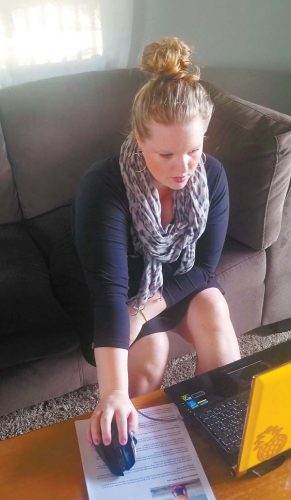