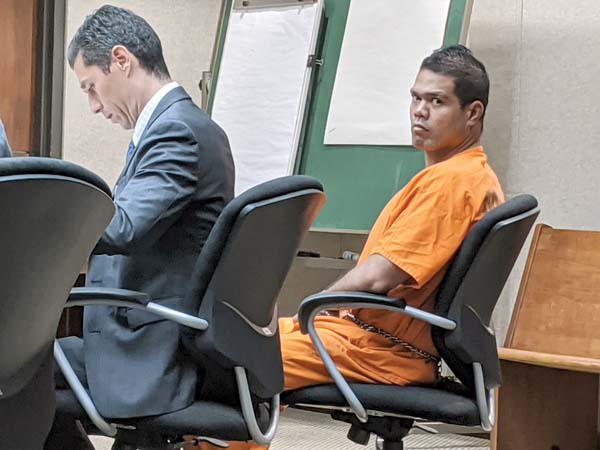 Kealiiwahamana Neula sits with Deputy Public Defender Tyler Stevenson at a preliminary hearing Wednesday afternoon in Wailuku District Court. Neula was ordered released after a judge found there wasn’t enough evidence to support probable cause for two counts of first-degree arson in connection with a fire last week at a Wailuku house. The Maui News / LILA FUJIMOTO photo

WAILUKU — A man who was arrested on arson charges in a fire that damaged a Wailuku home was ordered to be released Wednesday, after testimony failed to clarify the total damages and a judge ruled there wasn’t sufficient evidence to support the charges.

Kealiiwahamana Neula, 33, who was staying with a relative in a rental unit at 2175 Holowai Place, had been charged with two counts of first-degree arson in connection with the fire reported at 3:42 p.m. Nov. 6.

Residents living in both units of the single-story wooden house were displaced by the fire.

After testimony concluded in a preliminary hearing Wednesday in Wailuku District Court, Deputy Public Defender Tyler Stevenson argued that evidence hadn’t been presented to prove the fire caused damage greater than $20,000, which is required for the first-degree arson charge.

Stevenson said a fire investigator testified the damage estimate was “124, which would be far less than the necessary amount of $20,000 to sustain this charge.”

“I have no idea what that means,” Kobayashi said. “There was no clarification provided. The state has failed to set forth sufficient evidence to support a finding of probable cause.”

Before making the ruling, Kobayashi commented on the filing of two arson charges – one for each rental unit that was damaged by the fire.

“It does give the court pause to consider the number of charges the state has set forth,” Kobayashi said. “We have one structure, one house that the owner has elected to separate into two separate units. Whether the state can charge one count versus two counts is, I think, somewhat questionable.”

During the preliminary hearing, Neula’s sister testified that Neula was home when she left the residence at about 3 p.m. that day. She said she returned home 45 minutes to an hour later to find firefighters in the driveway and her home on fire.

No one was home when firefighters responded, said Maui police Detective Gregg Katayama.

He questioned Neula the next day, after he was arrested on unrelated matters.

On the day of the fire, Neula said he was under the influence of a narcotic, Katayama testified. He said Neula reported that “he was frustrated with the current situation and certain family issues and he couldn’t handle it anymore, so he set his sister’s unit on fire.”

Neula said he first lit a towel on fire and left it in the kitchen, then lit another towel and put it in a bedroom, Katayama testified.

He said Neula reported leaving and walking to his cousin’s house on Piihana Road in Wailuku.

“He said he was thinking about setting his cousin’s house on fire also, but he decided not to,” Katayama said.

He said there was extensive damage to the rear unit, where Neula’s sister was living, at the Holowai Place residence.

After the hearing, Littlepage said, “The state does plan to proceed with further charges. We feel he’s a danger to the community.”