Work on new Kahului terminal expected to begin in mid-2020 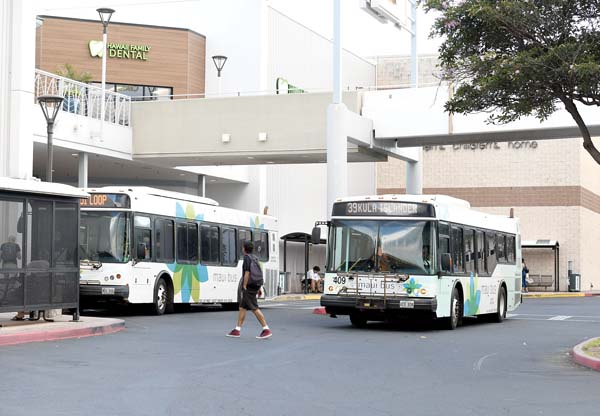 Buses arrive at the island’s busiest Maui Bus terminal at the Queen Ka‘ahumanu Center in this photo taken in October. The shopping center agreed to extend its lease, which was set to end Jan. 31, to July 2021 to allow time for the county to complete its new hub. -- The Maui News / MATTHEW THAYER photo

With construction on the new Maui Bus hub in Kahului slated to begin in mid- to late 2020, the Queen Ka’ahumanu Center and the county have agreed to extend the lease for the current terminal to July 2021, a county spokesman said Wednesday.

The shopping center in Kahului had notified the county in October 2017 that it would not be renewing the lease for the hub, which runs through Jan. 31. The mall terminal, which opened in July 2005, is the Maui Bus system’s busiest hub.

The Queen Ka’ahumanu Center and the county agreed to maintain the $1 a year lease terms, said spokesman Chris Sugidono.

He explained that the July 2021 extension is not necessarily a move-in date for the new Maui Bus hub to be built on state land across the street from the Queen Ka’ahumanu Center and the Maui Beach Hotel.

The project received its special management area permit from the Maui Planning Commission on Tuesday, and the county now will be working to obtain construction permits and a contractor. Construction is expected to begin “more toward mid- to late 2020,” Sugidono said.

Site work and building construction are expected to take about nine months, which would put completion in spring 2021 at the earliest.

The project also involves removing the Maui Bus infrastructure at the shopping center, which should take a few weeks, said Sugidono. The infrastructure includes 11 existing bus shelters, according to the environmental assessment for the project.

After the Queen Ka’ahumanu Center informed the county of its intention to end the lease, county officials began work on securing a site in proximity to the current hub and building the new facility. But it was becoming apparent that the county would not meet the Jan. 31 deadline, forcing the extension of the lease.

The county identified a site near the mall terminal to be able to maintain current routes. The 0.85-acre site was obtained in a swap with the state for the old Wailuku Post Office site, across the street from the county building.

The new terminal will include a ticket booth, restroom and storage building, roof structures to cover passenger-waiting and bus-loading areas and a parking lot, the environmental assessment said.

At the corner of Vevau and School streets, the new terminal is near the Kahului Public Library, the Waterfront Apartments and the 165-unit Kahului Lani senior rental project, set to open its 82-unit first phase early next year.

The cost is estimated at $3.5 million, the environmental report said. The state has put in $2.5 million for construction with the county adding $650,000 for design, according to previous reports.