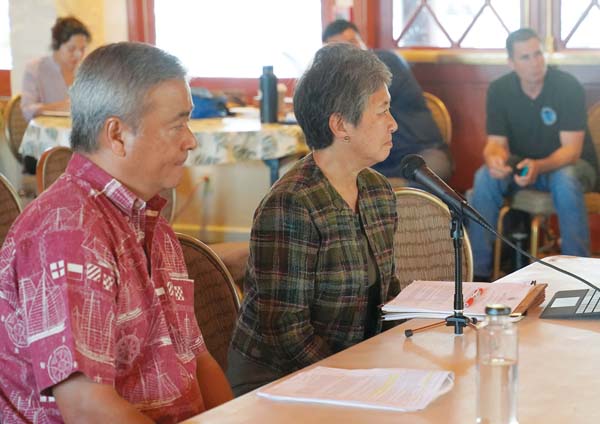 LAHAINA — Katie Wilson said she grew up in Texas but had never experienced Third World conditions until moving eight years ago to Honokohau Valley on Maui’s west side.

Wilson, who testified Wednesday with other residents before the state water commission in Lahaina, talked about area water shortages that residents say are linked to large companies wasting the vital resource.

“This is a serious issue,” Wilson said. “It’s because we go to town to fill up” large containers of water to bring back to the house.

“I don’t come from a Third World country,” she added. “I’m not used to this.”

“Do your part to move quickly,” commissioner Kamana Beamer said to ML&P officials. “That’s the interesting thing about this commission, we see it all across Hawaii — very different faces but similar issues. The sense of urgency is really important.”

“Let me just add and repeat that ML&P has already engaged engineers,” Izu said. “It is a priority.”

Commissioner Neil Hannahs said that more proactive work can be done by the company.

“The other thing I think you can do in this period is not just some engineering and some construction but some thinking about how does this new community work,” he said. “Maui Land & Pine does not have the benefits of the system that it once had; you don’t have that scope on the landscape. But you are a player, and you’re a big player, you’re a leading player.

“How are you going to start working with this community to figure out how to address this in a balanced way? You don’t have to respond to that now. I think just getting the idea — this is the new era of agriculture.”

The companies failed to properly maintain infrastructure and surrounding land that diverts water from the stream, the complaint says. Because of this, water that could be used by valley residents is being mismanaged and dumped.

In a water commission staff report Wednesday, a timeline noted flooding conditions in fall 2018 that damaged diversions and that ML&P lost its Honokohau Ditch manager around the same time.

During testimony, though, Bianca Isaki, another attorney for complainants, showed Honokohau water-wasting documents that date back to the early and mid-1990s.

Nonstream uses of Honokohau Stream goes to Kapalua golf courses (about 0.9 million gallons per day); Kapalua resorts (about 1 mgd); other uses such as agriculture, cemetery and Napili gardens irrigation (about 0.2 mgd); and county Department of Water Supply (about 2.5 mgd). The total current demand is approximately 4.6 mgd.

When asked by commissioner Michael Buck how much water will be back in the stream after the intake is fixed and ML&P is getting only what it needs, state Department of Land and Natural Resources hydrologist Ayron Strauch replied that it fluctuates.

“The amount that they’re taking varies over time based on flows available,” Strauch said. “Their end use, even with system losses and inefficiencies, are probably no more than 5 or 6 mgd. . . . Last night, they were taking 40 mgd. There is a lot more water that should be in the stream.”

The commission staff report outlined other measures to improve the stream flow and to find solutions, including installing a real-time gauge at the 340-foot elevation of Honokohau Stream in December; another one to Honokohau Ditch at Mahinahina in July; and a third gauge at Honokohau Ditch at Adit 6 in November.

Also, the commission had discussions with ML&P and the community from May to September to seek a resolution and went on a site visit with ML&P and contractors this month to discuss intake upgrades.

After the meeting, Collins and Isaki said complainants support the commission’s recommendations that ML&P be required to install a new intake and help restore Honokohau Stream flow.

ML&P will submit engineering plans and a work permit to upgrade Diversion 770 on Honokohau Stream to allow remote operation of diverted flow. Within 120 days of permit approval, the company will start diversion construction. Typically, a stream diversion works permit is valid for two years, so work would need to be completed within that timeline unless an extension is granted, according to the commission.

** This story includes a correction from the original published on Friday, Nov. 22, 2019.

There is a limited recall of Cheese Nips 11-ounce boxes shipped to Hawaii.

Debbie Cabebe is the chief executive officer of Maui Economic Opportunity, a nonprofit Community Action Agency that works to strengthen the community while helping people enrich their lives and achieve stability and economic security.

The No. 5 hole of the Kapalua Plantation Course is shown earlier this month. Among the changes done to this hole during the course’s $10 million renovation include the addition of a fairway bunker and an approach bunker, the removal of a greenside bunker, the elevation of the right greenside bunker and a slightly smaller green.