Unit to provide showers, laundry service and supplies to homeless 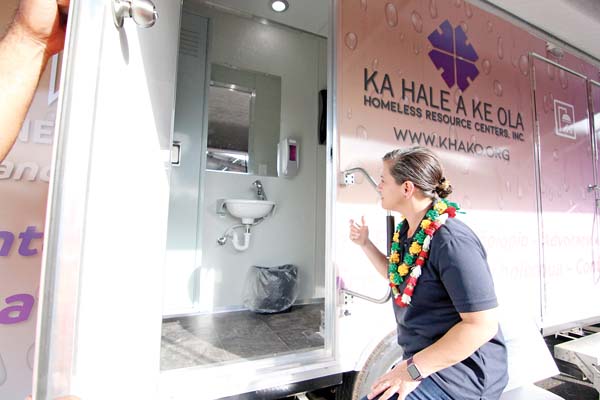 A mobile hygiene unit that will give South Maui’s homeless population a place to shower up, charge their phones and search for jobs will launch on Monday at Kalama Park, said Monique Yamashita, executive director of Ka Hale A Ke Ola Homeless Resource Centers.

On Wednesday afternoon, the nonprofit celebrated its new Ka La Hiki Ola Mobile Hygiene Unit, a facility on wheels that’s equipped with two toilets, three showers, a washer, dryer and two small workstations for private consultations. The unit also will offer donations of toiletries, clothing, food and other supplies, as well as Wi-Fi to allow people to apply for jobs and search for housing.

Ka Hale A Ke Ola estimates that it will assist at least 100 homeless people every year.

“One of the first things that a mobile hygiene unit does is psychological first aid,” Yamashita said prior to the event Wednesday. “When you look at the needs of an individual who’s homeless, often times they may not go and seek services or help because they haven’t bathed, they have dirty clothes, they haven’t eaten. They may not want to go into shelter as they are. . . . A mobile hygiene unit means we can go and meet the homeless where they’re at, help them with their dignity, give them a shower, wash their clothes and start building relationships with them.”

The unit was funded by a $100,000 county grant that covered the trailer – which was shipped from the Midwest – as well as a truck and four staffers. It was officially blessed on Sept. 24 but hasn’t hit the road yet. Once it’s operational, it will be stationed at Kalama Skate Park on Mondays and Wednesdays. Staff will make twice weekly visits without the unit to St. Theresa Church, which offers free daily meals through its Hale Kau Kau program. 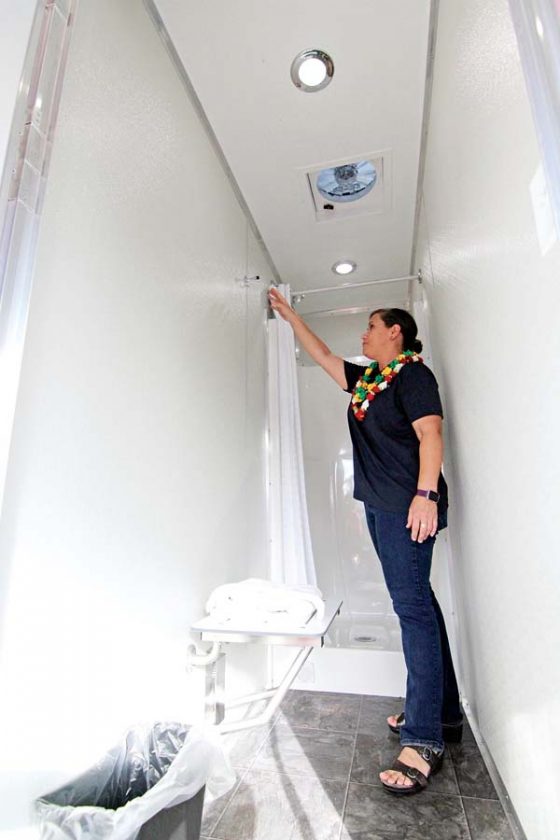 Monique Yamashita, executive director of Ka Hale A Ke Ola, offers a glimpse into one of the three showers in the mobile unit.

Yamashita said the unit came about because Ka Hale A Ke Ola had funding to provide services in Kihei but couldn’t find a good location. Initially, they’d hoped to set up a drop-in center in a physical building, but they were struggling to find a place and were trying to be “mindful of having homeless individuals congregate in areas,” she explained.

Early last year, Yamashita, some community members and County Council Chairwoman Kelly King, who holds the South Maui residency seat, decided to take a field trip to Oahu to check out a mobile hygiene unit there.

“The idea was, OK, if we can’t have a static building, why don’t we go ahead and have a mobile hygiene unit, which is working on Oahu and nationally,” Yamashita said. “It seems to be a service that is complementary to the homeless because we can go to where they’re at as opposed to them coming to where our static building is at. It would mean that we could help a broader range of individuals.”

Homelessness overall in Maui County went down by 1 percent since last year (872 to 862), according to the count. While some live in emergency or transitional housing, more than half are unsheltered. 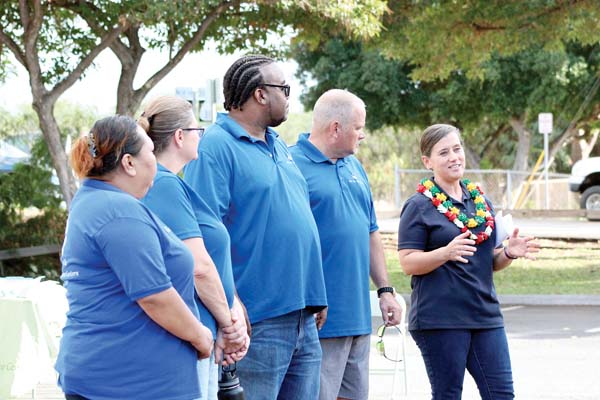 Jennifer Magaoay (from left), Samantha Ceretto, Barron Burton and Ron Reed, the staff that will operate the mobile unit, stand alongside Monique Yamashita, executive director of Ka Hale A Ke Ola, during a celebration for the unit Wednesday.

King said that when she first became a council member in 2016, “this was a huge growing issue in our community, but there were pockets of people doing things.” The mobile unit helps bring all of those resources together.

When the community first began holding meetings to discuss solutions to homelessness in South Maui, King said she was mainly interested to see whether residents truly cared – and didn’t just feel it was somebody else’s problem. The support was evident when even more people, about 80-plus, showed up to the second meeting. From there, they began prioritizing goals and formed a volunteer working group that would help bring about the mobile unit.

“This is the kind of stuff where you can actually see the efforts of the community come to fruition,” King said.

Ka Hale A Ke Ola’s program – Ka La Hiki Ola, or “A Dawning of a New Day” – has two phases, Yamashita explained. The first phase was to get into the community and start building relationships, primarily at St. Theresa where people gather daily for free meals. Since April 1, the agency has had 422 encounters (face-to-face, in-person meetings) and has enrolled 48 of them into the program. They’ve gotten 16 into emergency shelter, one into transitional shelter and two into permanent housing.

The second phase involves actually getting the mobile unit on the road. Yamashita said the goal is to build relationships and get people into housing. The mobile unit will bring along case managers and other professionals, such as a medical team to do wound care, and volunteers to help with legal services.

Across the country, mobile units are an emerging trend as communities seek creative ways to help homeless individuals get back on their feet.

The nonprofit Maui Rescue Mission recently launched a mobile trailer that provides a shower, toilet and two laundry units. The trailer is open from 10 a.m. to 3 p.m. at Kanaha Beach Park on Thursdays and at Hope Chapel in Kihei on Saturdays.

Jennifer Magaoay, who will staff Ka Hale A Ke Ola’s unit as the disability case manager, has already seen proof that the outreach is working. She met a homeless veteran at Hale Kau Kau who didn’t think he was “worth” having housing.

Magaoay continued to meet with him, encouraging him, building a rapport. Two weeks later the man was open to entering Ka Hale A Ke Ola’s emergency shelter in Wailuku. He got connected to veterans services and was eventually referred to transitional housing. Within 30 days, he landed a permanent place.

“I’m a South Maui resident all my life, and I see the homeless people,” Magaoay said. “My goal is to continue to give, provide resources, be there. There will be resistance. They’ve been homeless for a very long time. With this mobile hygiene unit, I know Ka Hale A Ke Ola will continue to provide success stories.”

Yamashita said Ka Hale A Ke Ola currently has no plans for another unit on Maui. She explained that they “really want to concentrate on this first unit” because the next phase for the nonprofit in South Maui is to build affordable housing.

She also said the nonprofit doesn’t want to have to depend on county funding and is looking for other options to keep the mobile unit operating. The anticipated annual cost of $108,000 would cover gas, staffing, maintenance and insurance.

Anybody interested in volunteering with the mobile unit or making donations of money or supplies should contact Ka Hale A Ke Ola at 242-7600 or go to khako.org.