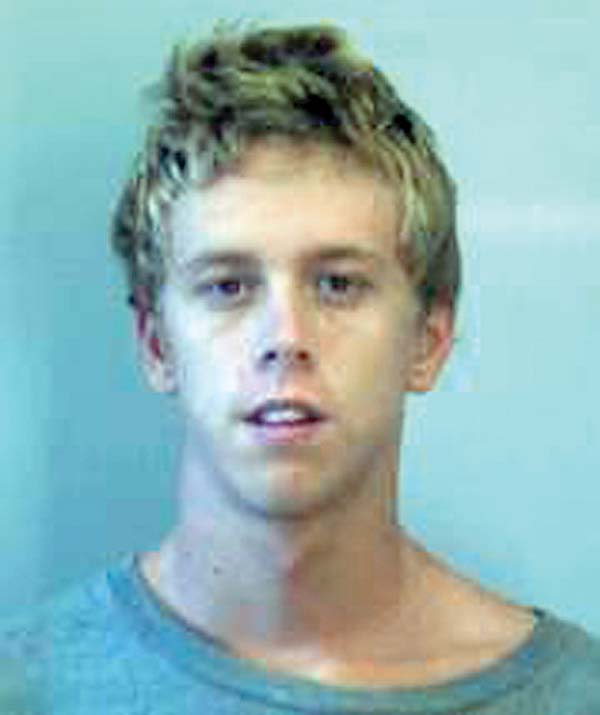 WAILUKU — A police officer testified his nose was bloodied, swollen and bruised when he was punched in the face by a Haiku man who was arrested in an abuse investigation last week.

Colton Roberts, 27, had one handcuff on his left wrist when he delivered the blow, after police had been called to his residence on Luahine Place at about 5 a.m. Friday to investigate the abuse, said officer Steven Landsiedel.

“He punched me one time in the face, hitting me in the nose and my right eye area, causing pain and my nose to bleed,” Landsiedel said.

Testifying Wednesday at a preliminary hearing for Roberts in Wailuku District Court, Landsiedel said he missed two days of work and was told he may have suffered a minor concussion after being punched.

Roberts, who was in the driveway of the residence, had been cordial and cooperative until he was told he was being arrested, Landsiedel said.

“He became agitated and asked, ‘Why? Where am I going?’ ” Landsiedel said.

When officers told Roberts to put his hands behind his back, “he tried to pull away from us,” Landsiedel said.

“He told me he was going to punch me in the head,” Landsiedel said. “I told him to stop again.”

He said officer Davelynn Tau-a was able to put one handcuff on Roberts’ left wrist as he continued trying to pull away.

Landsiedel said he had his arms wrapped around Roberts as they faced each other while slightly squatting when Roberts grabbed the officer’s belt, which held equipment including his firearm, Taser, baton and pepper spray.

Roberts was reaching near Landsiedel’s firearm magazines when the officer said he delivered two elbow strikes to Roberts’ left side.

Tau-a and Roberts’ father were trying to pull Roberts away from Landsiedel, he said.

He said Tau-a used her Taser in the drive-stun mode against Roberts’ left hip.

“It just caused him to become more agitated,” Landsiedel said.

He said Roberts was swinging his left arm, with the handcuff still on his wrist.

“I’m not sure if officer Tau-a grabbed his arm or the handcuff,” Landsiedel said. “It pulled her back, causing her to go to the ground.”

She was still holding on and pulled Roberts away, he said.

Landsiedel said he deployed his Taser to try to subdue Roberts at the same time that Roberts punched the officer. While one probe from the Taser may have connected with Roberts, the other ended up in his father’s waistband, Landsiedel said.

Asked by Deputy Public Defender Heather Wolfenbarger if the Taser affected Roberts, Landsiedel said, “I could not tell you.”

“Both probes have to connect in order for it to affect the nervous system,” Landsiedel said.

Then Roberts broke away and ran, Landsiedel said. He said Roberts was apprehended at about 7 a.m. Friday.

The officer said he had encountered Roberts about a year earlier when “he was not mentally in his right mind” and was transported to Maui Memorial Medical Center for a psychological evaluation.

In contrast, on Friday, Roberts “was mentally collectively there,” Landsiedel said. “He knew the date, who the president was.”

While Wolfenbarger argued that the prosecution hadn’t proven that Roberts intentionally or knowingly assaulted the officer, Deputy Prosecutor Jeffery Temas said Roberts threatened to punch Landsiedel before doing so and used force to escape from custody.

“This defendant took every action he possibly could to stop that arrest,” Temas said.

Judge Douglas Sameshima ruled that the prosecution had established probable cause for felony charges of first-degree assault on a law enforcement officer and first-degree escape against Roberts.

“Although he was not fully handcuffed, he certainly was aware he was being handcuffed,” Sameshima said.

Roberts also is charged with resisting arrest, abuse and interfering with reporting of an emergency or crime.

Temas asked that bail remain at $46,000 for Roberts, noting he is on 10 years’ probation for attempted manslaughter for stabbing his mother in the back.

“The state is concerned about the safety of the public,” as well as the 19-year-old woman who is the victim in the abuse charge, Temas said.

Wolfenbarger asked that bail be reduced to the $7,300 that was originally set. She said Roberts has a mental health diagnosis and receives disability income. Around the time he was arrested, Roberts had an appointment with Mental Health Kokua to review his mental health medication, Wolfenbarger said.

While on probation, “he has been substantially compliant for the better part of 10 years,” she said.

“Jail is just really not the place for somebody who has clear mental health needs,” Wolfenbarger said.

Judge Sameshima questioned Roberts’ father, who was in the courtroom gallery, before setting bail at $27,000. If Roberts is released on bail, he must be admitted into the Molokini unit at Maui Memorial Medical Center, Sameshima said.

“He’s not to be released to the public, to the community,” Sameshima said. “He is to be assessed and treated until clinically discharged.”

Roberts’ father also said he wanted his son to be treated at the Molokini unit before deciding whether Roberts can return home.

In 2012, Roberts was placed on 10 years’ probation after he had pleaded no contest to attempted manslaughter for stabbing his mother in the back with a knife while she was calling 911.

Roberts is scheduled to be arraigned on his latest charges Nov. 13 in 2nd Circuit Court.