Details on measures offered, but some want it to slow down 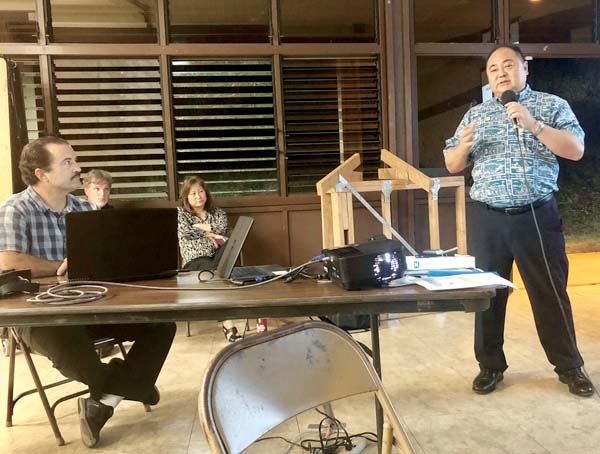 KULA — County officials continued to roll out information Wednesday night on bills that change property tax classifications and establish tiered rates, which they say would make generating county revenue more equitable on a diverse island that’s home to everyone from working families to wealthy part-timers.

Meanwhile, some community members say they don’t disagree with the concept, but the bills are being pushed too quickly and not enough information has been offered to allow informed decisions.

“It’s already November, and the part that we’re interested in hasn’t happened yet, and you need to get it done by the end of the year?” said Sean O’Keefe. “That doesn’t sound like it’s going to be providing a lot of time for people to figure out how does this affect me and am I in favor or am I against it, because until we know how it affects our individual tax bills, it doesn’t mean anything to us.”

Although the two bills would only set the framework for the county system and not set new rates, the bills would have to get Maui County Council approval by Dec. 1 or plans couldn’t be implemented by the next fiscal year.

The two bills were passed 6-1 on first reading by the council on Nov. 8, with Chairwoman Kelly King and Riki Hokama absent and excused. The sole “no” vote was by Yuki Lei Sugimura, who said the community needs more information. Sugimura, whose district covers Upcountry, has called the changes “huge.”

A second and final reading on the bills is needed.

County officials said if all goes according to plan, tax and tier rates would be established around June 2020. Property owners would see the impact on 2021 tax bills due in August and in February.

But Department of Finance Director Scott Teruya said the county vendor testing the program may not be able to finish it by Dec. 31, which would delay implementation.

She said the areas that would change are the following:

Tax tiers are similar to tax brackets but instead of making categories for a range of income levels, it creates a range of property values, according to Rawlins-Fernandez, chairwoman of both the council Economic Development and Budget Committee and its real property tax reform temporary investigative group.

Three equivalent or ascending tiers of tax rates are being considered.

Also, the council would have the ability to set every tier at the same rate, essentially treating it as if there were no tiers, Rawlins-Fernandez said.

Officials said dollar figures for each tier had not been set, and Rawlins-Fernandez emphasized that the community will have options for feedback on the tier rates, which wouldn’t be established until the next budget sessions between March and May.

Overall, the aim is to be more progressive, Teruya said.

“I heard about (this being) thoroughly vetted with the community, but I talked to a number of people I work with in the industry, and some of these people are caught off-guard,” said Dean Frampton during the meeting.

Another attendee, Russell Taft, said after the meeting: “It seems like they’re walking into something that hasn’t been really given to the public yet.”

Others supported moving forward with the bills.

“They are open to making changes in that bill before it goes forward; they are listening,” said Tom Blackburn-Rodriguez about the council during Wednesday’s meeting.

“I like the idea and I think it could be appropriate that we finally tax the megamansions and other very wealthy places at a higher rate than the lower one,” said Dick Mayer.

A tiered system has been used successfully in “many municipalities,” according to Rawlins-Fernandez.

Because Maui holds everything from small “mom-and-pop shops to large, multinational corporations,” she added, tiers should be applied to commercial and industrial classes “so that we can create a more equitable tax proposals that will not put our locally owned small business owners at a disadvantage, while also asking these large corporations to contribute their fair share to our island community.”

Rawlins-Fernandez said tax reform has been in the works for years by both the council and the administration. The council finance committee voted in May to create a temporary investigative group to explore tax reform ideas.

Its work is divided into phases over the next several years so “proposed changes can be thoroughly vetted by the public and council,” Rawlins-Fernandez said.