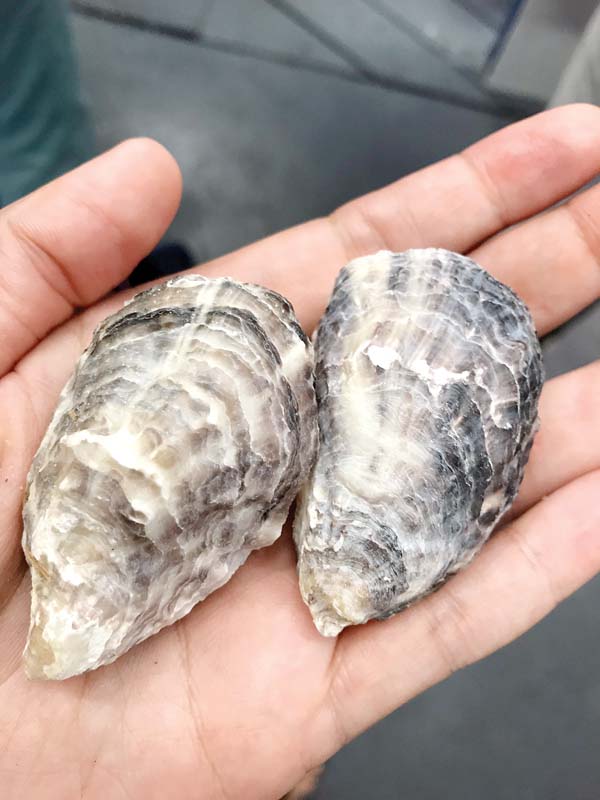 Sediment and wildfire remnants are the two biggest threats to coral reefs, and oysters may be among their saviors in a multifaceted plan for Maalaea Bay and its watershed, the senior ecologist of Maui Environmental Consulting said earlier this month.

The consulting company and the Maui Nui Marine Resource Council hope to reduce sediment runoff and pollutants in Maalaea Bay and harbor by introducing oysters beginning in January.

“This area is very dry for years at a time, it may not see surface water flow, but when it does flow, there’s a high potential for very extreme flash flood-type of events,” Michael Reyes said during a presentation held at The Sphere at the Maui Ocean Center in Maalaea on Nov. 13. “Oysters are great at pumping large volumes of water through their gills, and they’re able to remove all kinds of pollutants and impurities from the water.”

With the help of MEC, the council proposed a two-part pilot project called “Vision for Pohakea,” which includes the use of 500 to 1,000 small mollusks to remove sediment, bacteria, heavy metals, PCBs, oil, micro-plastics and nutrients from the water through filter-feeding.

Oysters also have the ability to digest the type of bacteria that cause skin-borne illnesses, such as staph and MRSA. One oyster can filter 50 gallons per day. 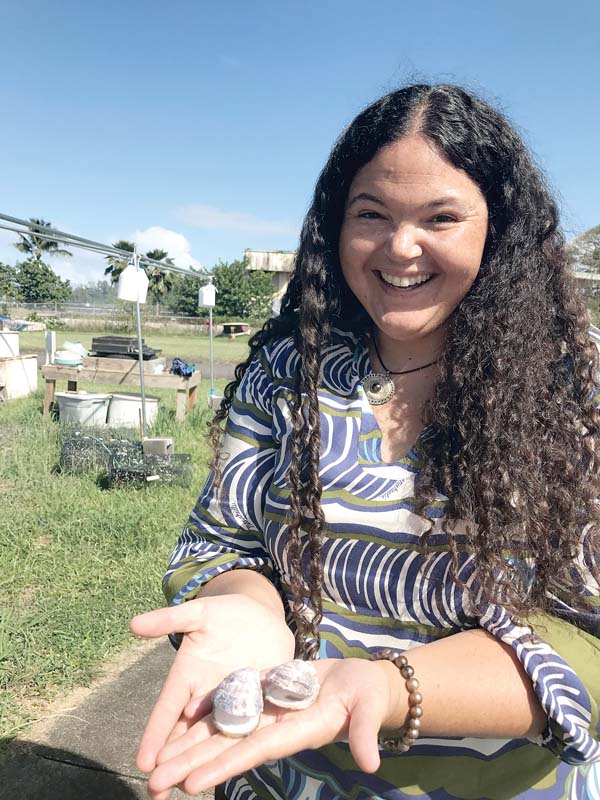 For part two, the council is working to prevent sediment runoff, debris and pollutants from entering Maalaea Bay and the harbor by adding fuel breaks and vegetation and through erosion monitoring.

The inedible, noninvasive Pacific oysters are being propagated at the Pacific Aquaculture and Coastal Resources Center at UH-Hilo and will be shipped to Maui when they are mature enough to live in Maalaea waters, said Anne Rillero, communications, community outreach and development manager for the Maui Nui Marine Resource Council.

They will be distributed in six cages and hung in Maalaea Harbor in January. The first batch will include 500 oysters with more added later in the year if the project goes well, said Hodges.

“All they want to do is grow and get big, which is exactly what we want because the more they’re growing, the more water they’re filtering,” Hodges said.

The entire project is slated to run through 2021 and is funded by the National Fish and Wildlife Foundation, Hawaii Tourism Authority and the Maui County Office of Economic Development, Hodges said. Maui Nui Marine Resource Council’s pilot oyster project is a partnership with Waterkeepers Hawaiian Islands and the Pacific Aquaculture and Coastal Resources Center at UH-Hilo.

Hodges added that oyster project is multi-year and will go beyond two years.

According to the Pohakea Stormwater Management Plan created by MEC, recent studies have demonstrated that increases in sediment discharges from watersheds associated with poor land-use practices can impact reefs over 62 miles from shore.

The Pohakea Watershed begins at approximately 4,600 feet at the summit of Hanaula on the West Maui Mountains, covering about 5,268 acres up slope from Maalaea Bay, and has several gulches that connect to the bay and Maalaea Harbor, as well as discharging into Kealia Pond National Wildlife Refuge, Reyes said.

The plan includes putting in 11 surface water monitoring stations in the watershed to sample the water being discharged into those areas.

The council continues to collaborate with the Hui O Ka Wai Ola program, which recently added two water-quality testing sites in Maalaea for a total of 41 sites on the south and west sides.

“We don’t know the water conditions at all of these (Maalaea) sites, so we’ll continue testing all the parameters,” Hodges said. “It doesn’t mean we will test at these spots forever, we just don’t know what we don’t know yet. We’ve started over the last few months.”

She hopes to share some of the sample results by the council’s first meeting in January.

Reyes said it was interesting to see that the Pohakea Watershed boundary is around 50 percent mixed rangeland. The other half includes cropland and pasture, shrub and brush, evergreen forest, nonforested wetland and residential.

The Pohakea Watershed was divided into four main discharge pathways, including Waihee Ditches, Kanaio Gulch, Maalaea Gulch and Malalowaiaole Gulch, and additional unnamed gullies. Within each of these areas, Reyes found sources of sediment vulnerable to erosion during high stormwater events.

“It’s important to understand where each of these systems are going,” Reyes said, adding that they tried to record all culvert locations and where they discharge during high stormwater events.

“We wanted to understand what systems are impacting what locations within the watershed,” Reyes said. “At higher altitudes and much of the conservation land associated with the wind farm, these areas have a high runoff potential.”

“During stormwater events, water is flowing down these gulches and backing up at the culverts under Honoapiilani Highway, and that water is becoming almost like a wash cycle,” he said. “It’s moving back up the stream channel and eroding these stream channels and actually causing a source of sediment pollution.”

Reyes added that evidence of erosion within the middle of agricultural lands was “very evident,” with the area showing signs of vegetation loss, invasive plant species and charred land leftover from recent fires.

The Maalaea Triangle Parking lot as well as the resorts and condominiums located along Hauoli Street also are sources of sediment, petrochemicals, metals, trash and other runoff that “I thought should be addressed,” Reyes said.

“Unfortunately, it’s all going out into the harbor,” he added.

The management plan also mentions the 15 injection well permits that exist within the Pohakea Watershed boundary — 13 are used for sewage and two are used for industrial wastewater. These wells are relatively shallow in depth, and it is widely believed that sewage wastewater effluent from these wells is making its way to the shoreline and mixing with nearshore coastal waters.

When too much nitrogen is present in water, algae blooms can occur. Additionally, leaching from nearby cesspools may be contributing to the high levels of enterococcus and nutrients observed within Maalaea. Cesspools can leak contaminants into oceans, streams and groundwater, which can cause algae blooms as well.

“Any infrastructure or any projects that we implement, we need to keep in mind that they need to be engineered to handle high-flow stormwater events,” Reyes said.

He also suggested that old roads could be repurposed as firebreaks.

“We all know that this area has extreme fire events, we just recently had a fire, and it seems like every year we’re having fires,” he said. “Existing firebreaks need to be maintained or new firebreaks need to be established in the watershed and certainly in the mauka conservation lands.”

A wildfire that began in Maalaea raged uncontrolled over the pali, shutting down the highway and main corridor between West Maui and the rest of the island for hours in early October. The fire burned more than 4,000 acres.

Other recommendations include maintaining vegetation, ideally native plants, to reduce fire hazards in the plains and around active power line corridors; installing floating plant rafts in the wetlands and multipond systems; and more beach cleanups to keep channels free of trash.

Implementing fire restoration efforts after fire events to quickly restore the topsoil can mitigate topsoil loss during the following rainfall. Reyes suggested adding more plant terraces on the hill slopes that are vulnerable to landslides. Any sediment or stormwater would get caught in the vegetation and promote filtration.

While only a small portion of the Kahili Golf Course in Waikapu is in the project area, Reyes said golf courses can be used to reduce nutrient runoff and groundwater pollution. This includes constructing a “nutrient curtain” or a permeable reactive barrier, a 3-by-4-foot trench containing a mix of hardwood chips, sand, sawdust and activated charcoal.

“The water is cleaned as it moves through that system,” he said. “They’re fairly inexpensive.”

The Pohakea Stormwater Management Plan is available for download on the Maui Nui Marine Resource Council website at mauireefs.org/what-we-do/oyster-restoration-pilot-project/.