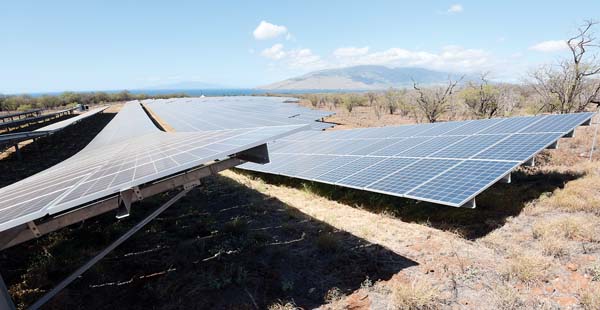 The 2.87-MW South Maui Renewable Resources in Kihei, the second industrial scale photovoltaic system on the island, went online in October. This photo was taken Nov. 28, 2018. Another industrial scale PV with battery storage system, Paeahu Solar, has been proposed for 200 acres of Ulupalakua Ranch land above Maui Meadows. The 15-megawatt solar and 60-megawatt-hour battery project proposed by Canadian-based Innergex Renewables is facing opposition from neighboring residents with a contested case hearing set before the Public Utilities Commission next week. -- The Maui News / MATTHEW THAYER photo

A coalition of South Maui residents will make their case next week against a large-scale solar and battery project that they say will be too close to homes and charge too much for electricity.

Paeahu Solar is a 15-megawatt solar and 60-megawatt-hour battery project proposed by Canadian-based Innergex Renewables on about 200 acres of Ulupalakua Ranch land. The company says the project would power about 7,300 Maui households.

On Wednesday and Thursday, the state Public Utilities Commission will hold a contested case hearing on the project at the Maui Research & Technology Park in Kihei. Paeahu Solar, Maui Electric Co., Pono Power Coalition and the state Division of Consumer Advocacy will all present their cases, said attorney Lance Collins, who is representing the coalition. The hearings start at 9:30 a.m. both days.

The project is one of the latest to come down the pipe as Maui accepts increasingly larger solar projects amid a statewide push toward 100 percent renewable energy by 2045. Last year, the island’s first two large-scale solar projects came online — the 2.87-MW Ku’ia Solar in Lahaina and the 2.87-MW South Maui Renewable Resources in Kihei.

Projects are getting bigger, and they’re bringing on batteries. Colorado-based AES Renewable Energy is developing Kuihelani Solar, a 60-MW solar and 240-MWh battery project to be built on as much as 500 acres of former sugar cane fields off Kuihelani Highway in Central Maui.

Paeahu Solar also would have battery storage. And while Maui Meadows residents who live near the project site say they support renewable energy, they’d rather see it built in an industrial area away from homes.

However, developers have not been willing to budge on the project’s location, Collins said. At public meetings, Innergex officials have made it clear that they couldn’t build the project anywhere else, and that they would listen to concerns but didn’t plan to change anything, he said.

The coalition of Maui Meadows and Kihei residents (Collins said there are seven officers and about 700 members and supporters) wanted to know whether Innergex had done studies on archaeological artifacts, endangered species and drainage issues in an area where Upcountry rain flows down the mountainside into Kihei.

In addition, “people had concerns about having a massive array of solar panels reflecting sunlight or making it even hotter next to their houses,” Collins said.

The coalition’s other main concern is that the price that MECO would pay for electricity from Paeahu is higher than the going market rate for solar and battery projects — 11.68 cents per kilowatt-hour, though Collins believed the levelized price of 12.44 cents was more reflective of what Paeahu would get in the long run. By contrast, the Kuihelani Solar project approved by the PUC earlier this year will cost MECO 8 cents per kWh, among the lowest in the state.

Rates for five other solar-plus-battery projects approved around the same time ranged from 8 cents on the low end for the 30-MW solar, 120-MWh storage Waikoloa Solar on Hawaii island to 10 cents on the high end for the 36-MW, 144-MWh Waiawa Solar and the 52-MW, 208-MWh Ho’ohana Solar 1, both on Oahu.

“This is going to be a 25-year project,” Collins said. “If it’s already overpriced and we’re locking this in for 25 years, Maui ratepayers are basically, in a few years from now, going to be paying too much. . . . That’s another major concern, is that this thing is so overpriced that it’s going to prevent MECO from actually putting more renewable projects online. . . . Instead of putting more energy at less of a cost, they’re buying more energy at more of a cost.”

Collins said the coalition members want two main things — for the project to be relocated and for the price to come down. One idea floated by the community has been to move the solar farm mauka of the Wailea 670 project, which will have a botanical and cultural preserve on its south end. It’s not the coalition’s official position, but fewer homes would be impacted, and people moving into the development would be able to decide ahead of time whether they wanted to live near a solar farm, as opposed to the “people who lived here for 30 years and now they’re going to be putting this industrial power plant right next to your house,” Collins said.

He explained that the coalition doesn’t have a proposed location because “there hasn’t been any engagement on what are Innergex’s options.”

He added that the coalition’s concerns about cost take it beyond just a “not-in-my-backyard” type of opposition.

“The issue of it being way overpriced, that’s not something that’s specific to the people who live in Maui Meadows,” he said. “Everybody on Maui that buys electricity from MECO is going to get ripped off.”

Eddie Park, business development manager for Innergex, said that the selection process wasn’t solely based on price but also on other factors that MECO spelled out in its request for proposals.

“Innergex put a compelling project on the table and Maui Electric selected it as the result of a competitive procurement process,” Park said. “We believe the project will alleviate the building of additional transmission lines as South Maui continues to grow. The project is anticipated to reduce rates to customers, lessen Maui’s exposure to fuel price volatility, offset greenhouse gas emissions, and increase the state’s contribution to its 100 percent renewable energy goal.”

Park said that based on the community input, the company relocated the project farther away from the neighborhood and reduced the height of the panels. In an Oct. 22 response to coalition questions, officials explained that they would push the project away from the residential area by an additional 50 feet, plus a 20-foot firebreak between the fence line and the solar array, meaning the nearest solar panels would be about 270 feet away from the Maui Meadows fence line.

“Additionally, we assessed an alternative site further south on the parcel, to the point where we stopped our development work on the current site and spent time and resources to perform archaeological, environmental and technical assessments,” Park said. “The assessments indicated that the archaeological and environmental impacts would be too great at the alternative site.”

Park added that the company would “continue to listen and address the concerns of the community regarding archaeological sites, endangered species, drainage, reflection, heat and other issues.” Some of the concerns have been and will be addressed once studies are completed, he said.

When asked why rates for Paeahu Solar would more expensive than other recent projects, MECO spokeswoman Shayna Decker said that pricing can vary for a number of reasons, including differences in size — larger projects like Kuihelani Solar usually offer lower pricing — as well as location and the type of technology. Developers propose the rates in response to MECO’s request for proposals.

“The entire proposal is then evaluated and selected as a finalist based on the results of the company’s RFP evaluation,” Decker explained. “In addition to pricing, the company’s evaluation weighs the project’s technical and operational capabilities and flexibilities when integrated with the electrical system to determine whether a project is reasonable and in the public interest.”

Decker added that there are challenges that come with moving projects farther away from residential areas.

“Typically when planning for new power generation, it’s more efficient — costwise and logistically — to have projects built in closer proximity to the established electrical system that delivers the power to nearby homes, businesses and schools,” she said. “Building energy projects further away from populated areas increases the overall costs to customers to construct additional electrical infrastructure.”

Decker added that MECO was “disappointed” in the state Consumer Advocate’s position.

In a pre-hearing statement, the Consumer Advocate expressed concerns with Paeahu Solar’s community outreach and pricing and said that it does not support the project at this time.

The Consumer Advocate explained that it recognizes the potential bill savings, but that doesn’t necessarily mean that the project’s pricing is reasonable. Without cost invoices to support the higher pricing, “the Consumer Advocate cannot determine what is driving the higher pricing for this project relative to other renewable energy projects selected in the same RFP (request for proposals),” the statement said.

And, with prices falling for other projects, “there should be a significant decrease in the prices facing consumers,” the Consumer Advocate continued.

Decker said that MECO still believes the project will benefit customers and “help accelerate the transition from imported fossil fuels to local renewable energy.” She said Innergex has reached out to the community and responded to concerns by moving the project back even farther than it originally was, which was already farther than the setback required by the county.

“Siting any kind of energy project on an island is challenging because space is limited,” Decker said. “There will always be trade-offs and even more renewable energy projects are coming. If we’re serious about taking action on climate change and getting off fossil fuels, we all have to work together to manage the trade-offs.”