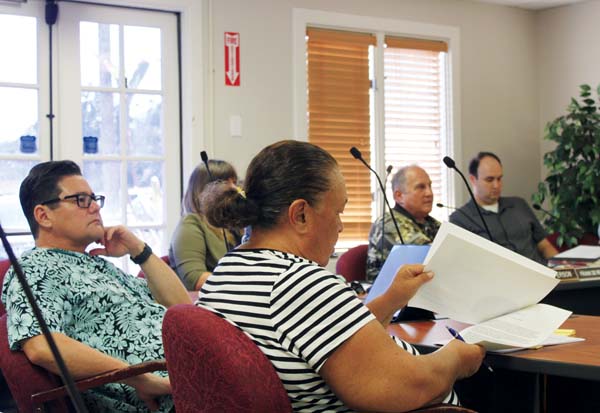 WAILUKU — Maui Redevelopment Agency, which has power to alter zoning and development rules for downtown Wailuku, had the largest turnout of testifiers in recent history Friday afternoon — all of whom spoke in opposition to a proposal to increase building heights from four to six stories.

At the end of the meeting, the county agency said it would postpone zoning updates until public workshops are held and community concerns can be addressed.

Nearly two dozen testimonials echoed worries of downtown Wailuku becoming the next Honolulu, especially during a time when affordable housing and environmental resources are severely lacking.

“We say we don’t want to become another Honolulu and yet we are on track to doing just that,” said Stacey Moniz, whose Wailuku family dates back generations. “When is enough going to be enough?”

Although the agency had no action scheduled, and proposed rule changes for the area’s zoning, development and design have been mulled for more than a year, community concerns spiked after a six-story Wailuku hotel concept was recently disclosed. As of Friday, the project was not yet on file with the county agency.

County planning consultant Carol Rhea during the meeting cautioned against letting “any particular issue that’s on the table right now drive that process faster than it should go.”

“I think your zoning ordinance definitely needs to be updated, but what we found is that it is more than just this standard or that standard, you really need to take the time to be clear about what Wailuku town’s vision is for the area, and that isn’t currently very clear,” she said. “Zoning is a tool intended to help a community implement vision, so understanding that vision, I think, makes a lot of sense. And if we rush through the zoning that actually doesn’t help any better than what the tool right now is doing for you.”

“Once the height restriction is raised, it sets a precedent for it to be raised and raised,” said Matt Fox of Haiku. “All because good people were looking out for the bottom line of developers.”

“I oppose this, all the way from Paia,” said Francine “Aunty Mopsy” Aarona. “This is not just a concern for people who live in Wailuku, but it is a concern for the people that live in this aina, all of Maui.”

Other testifiers, such as shoreline activist Kai Nishiki, raised issues about whether community engagement had been sufficient and asked that the agency meetings, which are held at 1 p.m., be scheduled during times when residents are off work.

“This agency’s current path of projects and planning are voted upon by a group of unelected planners and developers, allowing override of the General Plan, Community Plan and Zoning Ordinance without an ordinance passed by Council or a Charter amendment approved by voters,” she said in written testimony, adding that she will soon take up the issue in an appropriate committee.

Other portions of the Wailuku Redevelopment Area code draft removes language relating to nonconforming lots, which abound in the approximately 68-acre area.

“I’m concerned because our temple is built in a triangle shape,” said testifier Rev. John Hara, whose Wailuku Jodo Mission is within the Wailuku Redevelopment Area. “I don’t think if you took away a lot of the grandfathered zoning rules, the guidelines, we would have a lot of issues.”

After testimony, county redevelopment program planner Erin Wade advised the five-member volunteer board to table any changes to zoning at this time until the agency is able to “flesh out whatever development projects may be coming and were expecting to come under existing zoning.”

“In the meantime, if there’s additional research that needs to be done related to some of the things that have come up, whether it be design guidelines or lots sizes or nonconformities, we can be working on those things,” she said. “And I would like to look at future workshop dates several months out to make sure we engage the public on days and weeks that are accessible.”

Wade said the meeting is the ninth or 10th the agency has had on zoning, but it is the first time the agency had seen a turnout of “this size.”

“It’s good,” she said. “I would encourage folks to come out when there’s not an imminent project coming but when we’re working on the hard work of writing the law, that’s really when we do need your input.”