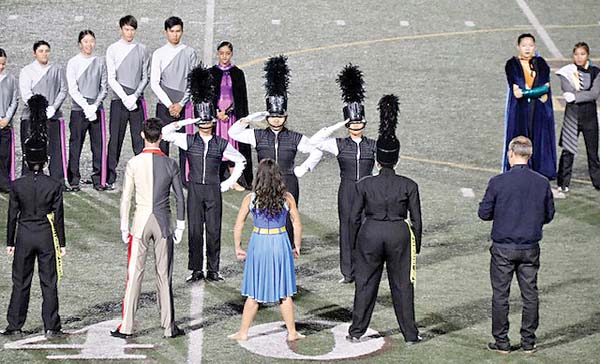 The Maui High School Marching Band took top honors in their division in a Western Bands Association competition in Chino, Calif., on Saturday.

The Sabers bested two other bands in their division, with 82,250 total points in the Class 4A division in the Conquistador Classic marching competition at the Don Antonio Lugo High School. The competition mainly consisted of California bands.

Maui was in the division for bands between 101 and 140 members. The Sabers have 123 students, which includes their color guard.

Hours after the band arrived home on Maui on Tuesday afternoon, Band Director Kerry Wasano said he did not think Maui would bring home the top prize. 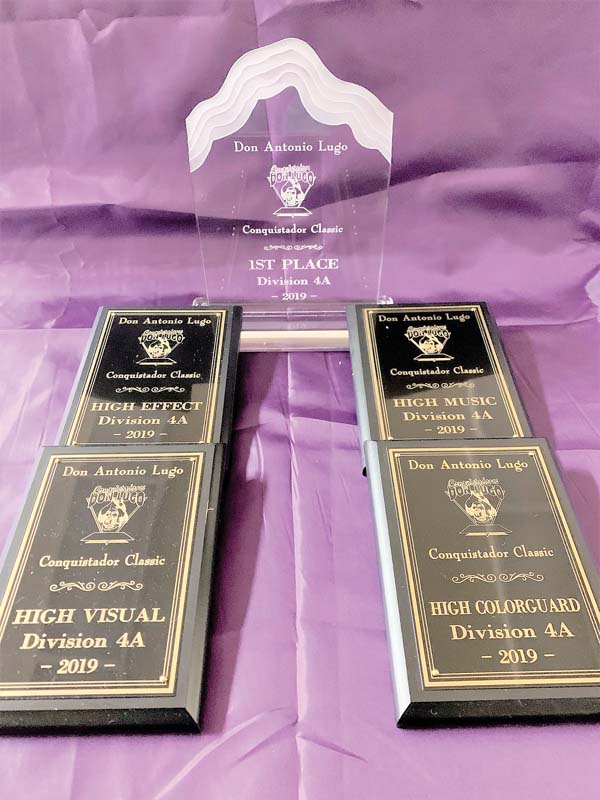 Maui High School’s Marching Band captured first place in its division in the Western Bands Association Conquistador Classic in Chino, Calif., on Saturday. The band also captured the four out of five judging categories in the competition (those awards and the overall award shown). Maui High School Band photo

“We were going against some well-established schools from the area. . . . I think the kids were really surprised when they found out they did so well.”

“We were going up there to have a good, last performance,” he added as the marching band season ended with the competition.

The Sabers took first place in their division in four out of five categories: effect, music, visual and auxiliary. They took second in percussion.

The Sabers performed their nearly eight-minute show, titled “Outside the Box,” led by Drum Majors Joebelle Daludado, a senior; Rodel Domingo, a junior; and Gwen Jaramillo, a sophomore.

“The final award is nice, but it doesn’t make or break their season,” Wasano said in a news release. “I tell my students that the journey is more important than the end result.”

Band President Sarah Sakakihara, who also was a flute soloist in the show, echoed Wasano.

“I learned that it’s great to win, but that the real success begins from day one on the field when we make the choice to give it our all at the rehearsal to make our friends, family, staff, and each other proud,” she said.

The marching band season, which ended with the California performance, began on June 1.

“We are so very proud of the accomplishments of our marching band,” said Principal Jamie Yap. “The hard work, sacrifices, fundraising to achieve this goal is a testament to the band’s success.”

The Sabers marching band has performed in the Tournament of Roses Parade in Pasadena, Calif., in 2015, at Oahu marching band competitions and at the Bands of America Grand National Championships in Indiana in 2017.

The road to the competition wasn’t an easy one; this year the band was without a sponsor who previously transported instruments, props, and equipment for free.

So the band put a call out for sponsors, and students held fundraising efforts.

The marching band’s goal was to raise $50,000 on an online giving platform and received a little over $40,000, which Wasano said was more than he expected.

Still, Wasano said the band had to dip into its general funds.

He expressed gratitude to the community, and said the band is thankful to those who donated to help with their trip.

Marching season is done, but the concert band season is gearing up for the holidays.

“Rest now and then prepare for Christmas,” he said.