Late Capt. Lawrence Oliveira will also get his name on Vietnam Veterans Memorial 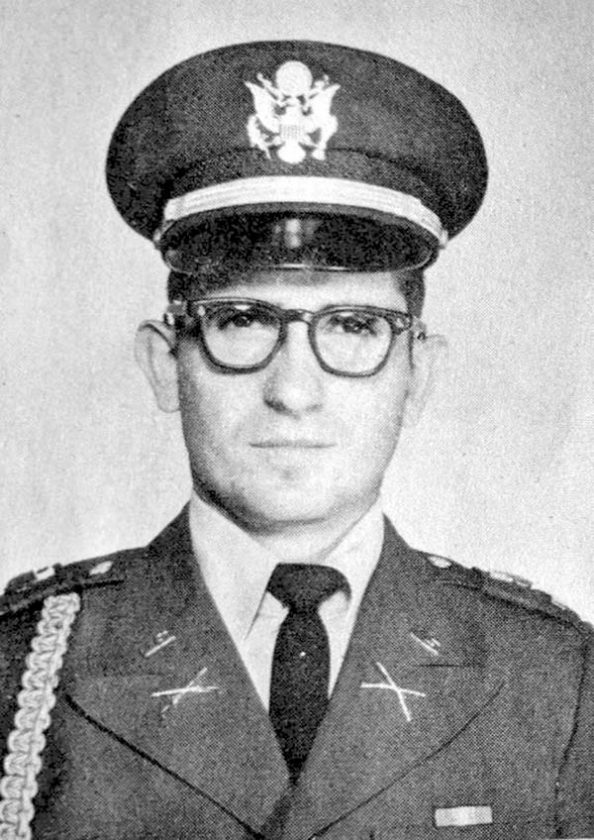 Oliveira’s five daughters stood in his place and received the medal on his behalf during the long-awaited ceremony at the Makawao Veterans Cemetery on Monday.

“It’s about time,” said their uncle, Thomas “Tommy” Duarte, who was in officer cadet school with Oliveira and presented Oliveira’s daughters with the medal before a crowd of several hundred.

It is one of two honors that Oliveira’s five daughters, other family members and Maui veterans pushed for him to receive decades after his death. After a two-year effort, Oliveira’s name will also be inscribed next year on the Vietnam Veterans Memorial in Washington, D.C., a rare honor that’s difficult to obtain for veterans who were injured in the war but died outside of Vietnam.

Oliveira, who returned to Hawaii after his injury in 1969, died five years later. His youngest daughter was three months old and the eldest was 9. 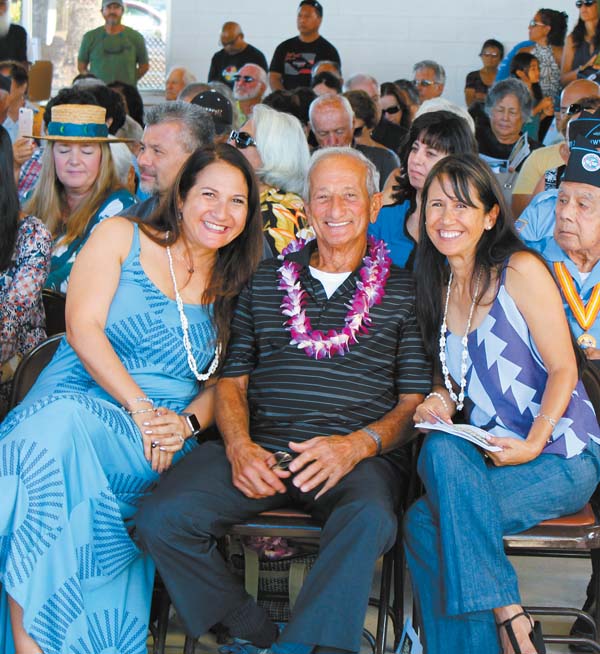 Sisters Julie Oliveira-Payton and Momi Oliveira-Tomaszek flank their uncle Thomas Duarte at the Veterans Day ceremony at Maui Veterans Cemetery in Makawao on Monday. All five of the Oliveira sisters (three not pictured), Duarte and others pushed for the Oliveira girls’ father, the late Capt. Lawrence R. Oliveira, to get his name placed on the Vietnam Memorial Wall. On Monday, Capt. Oliveira’s family received his Purple Heart award. The Maui News/MELISSA TANJI photos

“Daddy was always a hero to us,” the sisters said. “Now, he will be a hero to the millions of others who visit the Vietnam Veterans Memorial wall.”

On Monday, eldest sister Lisa Oliveira-Tua teared up as Duarte pinned her father’s Purple Heart on her blouse.

Duarte later delivered humorous stories about Capt. Oliveira, describing him as inconspicuous among the top brass and able to get out of being ordered to perform tasks, unlike Duarte himself.

A retired captain and former Maui County Fire Chief, Duarte was also involved in efforts to honor Oliveira. Prior to Monday’s ceremony, he said that he was disappointed that officials who should have pushed for Oliveira’s accolades earlier were not successful. However, he commended Oliveira’s daughters for their work in researching their father’s medical records and corresponding via letters and emails with military officials.

After the ceremony, Oliveira-Tua said she was “so relieved” that her father received the accolades he deserved. At times it was hard for her to process her father’s paperwork for the honors, as she is the eldest and remembers him the most. 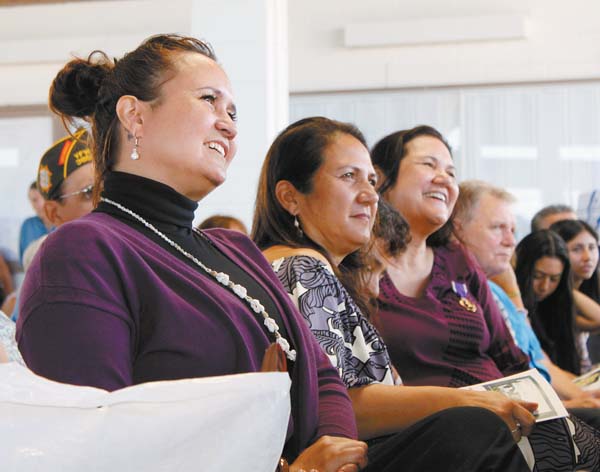 Three of the five Oliveira sisters share a laugh Monday as their uncle Thomas Duarte told humorous stories of their late father, Capt. Lawrence R. Oliveira, who received his Purple Heart on Monday. From left are: Laurielyn Oliveira Loa; Judy Oliveira; Kahaloaola Souza, a grandchild of the late captain; and Lisa Oliveira-Tua, along with Greg Payton, husband of another sister, Julie Oliveira-Payton (not pictured).

When asked how her father would react, she said, “He’s so kolohe. He would be cracking jokes, like Uncle.”

Oliveira, who hailed from Nahiku, was injured in Vietnam when he was hit by rocket-propelled grenade round fragments on May 13, 1969. At first, the family thought he had died. His wife, Hazel, and their family had temporarily relocated from Maui to Schofield Barracks on Oahu while Oliveira was in Vietnam. At the barracks, Hazel was told that her husband was killed in action.

But the family said “through the grace of God,” their father showed up at Tripler Army Medical Center on Oahu six days later. He had been flown from Vietnam to Oahu and was in a coma.

Oliveira never got his Purple Heart medal or a ceremony; he was busy getting irrigation and blood transfusions in the hospital. He spent several months at Tripler, underwent multiple surgeries to remove shrapnel in his right shoulder and remained there for a year for physical therapy after losing the use of his shoulder and arm. Not all of the shrapnel could be removed.

Oliveira’s shoulder and arm were pieced together with skin grafts and a visible iron rod, leading to his medical retirement from the military in December 1970. 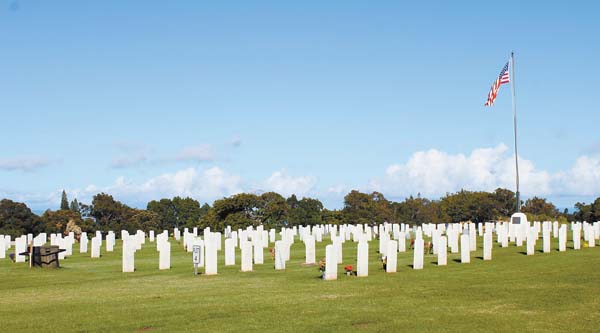 He returned to Maui and lived in Kahului, where he worked for the county and started a ranch in Nahiku with Louis Abreu. They named it “H&E Ranch,” after their wives, Hazel Oliveira and Ethel Abreu.

But visits to the doctor and hospital became routine for the Oliveira family. The shrapnel remained in Larry Oliveira’s body, creating multiple complications. He went into cardiac arrest the day after their youngest daughter, Laurielyn Oliveira Loa, was born.

The idea to get Larry Oliveira his long-awaited honors was born in the summer of 2017, when Mel Ozeki, who was originally from Hilo and went to officer cadet school with Larry Oliveira and Duarte, wondered why Larry Oliveira had not been honored. Ozeki had attended a ceremony and noted that his old friend wasn’t recognized.

That set off a chain of information gathering, phone calls, letters, emails and research.

It wasn’t easy and it took patience. But the daughters received encouragement, especially in the efforts to get their father’s name up on the Vietnam Memorial.

Daughter Julie Oliveira-Payton said the original names on the wall were for those who died in Vietnam. But many have petitioned the U.S. Department of Defense for families members who were injured and returned home but later suffered a “delayed death.” If petitioning family members could show a direct correlation between the death and injuries, an exception was granted. However, a Vietnam Memorial official told the Oliveira family that it would be an “uphill battle” to get their father’s name on the memorial, and that thousands apply but get denied. The requests that do get approved often take several years and require the help of politicians. The girls pushed forward anyway.

“We honestly feel so blessed it only took us two years,” Oliveira-Payton said. “We had angels in our path.”

Through their quest to get their father’s name on the wall, the family also ended up receiving Oliveira’s medals and his Purple Heart in May 2018, with the official ceremony finally held Monday. Next year, the family will travel to Washington, D.C., in May for a Memorial Day ceremony at the Vietnam Veterans Memorial.

All five sisters were present for the ceremony Monday. Four live on Oahu and commute often to Maui, while the youngest, Loa, lives in Las Vegas.

Looking back, the sisters collectively said they were honored and happy. They thanked everyone involved, including the retired Col. Lloyd Sodetani, the Korean War Veterans Maui No Kai Oi Chapter 282 and Na Koa Kahiko Wahine, the organizations that sponsored Monday’s Veterans Day event.

Kumulipo Sylva was convicted of manslaughter in October in the March 2018 killing of Alex Cerezo. Sylva is named as a defendant in a wrongful death lawsuit that Cerezo’s family has filed against the mall, claiming that the mall did not improve security after a rash of violent crimes. The Maui News / COLLEEN UECHI photo

Chan Ly returns a second-set shot while teaming with Rick Kepler for a 6-2, 6-4 win over Kyle Ellison and Mark Reedy in a men’s open doubles match Saturday at the Wailea Fall Doubles tournament at Wailea Tennis Club. The event raised $16,000 for the Semper Fi Fund, organizers said. The Maui News / MATTHEW THAYER photos

Melissa Bartlett follows through on a return while teaming with Kate Hamre in a women’s 7.0 doubles match.

Sisters Julie Oliveira-Payton and Momi Oliveira-Tomaszek flank their uncle Thomas Duarte at the Veterans Day ceremony at Maui Veterans Cemetery in Makawao on Monday. All five of the Oliveira sisters (three not pictured), Duarte and others pushed for the Oliveira girls’ father, the late Capt. Lawrence R. Oliveira, to get his name placed on the Vietnam Memorial Wall. On Monday, Capt. Oliveira’s family received his Purple Heart award. The Maui News/MELISSA TANJI photos

Three of the five Oliveira sisters share a laugh Monday as their uncle Thomas Duarte told humorous stories of their late father, Capt. Lawrence R. Oliveira, who received his Purple Heart on Monday. From left are: Laurielyn Oliveira Loa; Judy Oliveira; Kahaloaola Souza, a grandchild of the late captain; and Lisa Oliveira-Tua, along with Greg Payton, husband of another sister, Julie Oliveira-Payton (not pictured).

A pair of buses sit outside the Queen Ka‘ahumanu Center bus hub in October. The family of Alex Cerezo, who was killed in a second-floor bathroom shortly after getting off a bus at the mall in March 2018, has filed a wrongful death lawsuit against the mall ownership; the property manager; security services; Maui County, which operates the bus and its hub at the mall; and Kumulipo Sylva, who was convicted of killing Cerezo. The Maui News / MATTHEW THAYER photo